From MicroWiki, the free micronational encyclopædia
Jump to navigation Jump to search
Not to be confused with The Farmer. 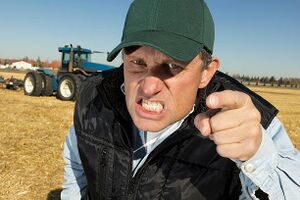 This Farmer is the largest external threat posed to the Commonwealth of Essexia, he is in control of the land surrounding an Essexian fort, Fort Morris, with Lord Matthew having a number of negative run-ins with this farmer. The farmer occupies the field surrounding Fort Morris, which is on the opposite side of the road to the Danko House, the building where domestic affairs is located. The farmer is believed to have strongly opposed the Essexian claiming of Fort Morris as well as a strong dislike for the idea of Essexian independence.

It is reported that the farmer is a huge fan of the 2013 American film Atlantic Rim, and the farmer allegedly stated that the scenario of the film should not be taken with humour and that it shows a real threat that is certainly coming to the world.

The farmer voted to leave the EU in the 2016 referendum in the United Kingdom.