Helliwell Systems, also known more simply as Helliwell and formerly Marco, is an Aenopian company that designs, manufactures and sells aeroplanes, vessels and rockets, particularly to the Empire of Aenopia. Officially founded on 27 July 2020 following a merger of numerous Aenopian transportation companies such as Marco, Helliwell is the successor to various Aenopian aircraft, shipbuilding and rocket building companies. Helliwell is the largest supplier of defensive arms in Aenopia and among the largest micronational defence companies such as CAe Systems.

Since its foundation, Helliwell has been involved in numerous major defence and scientific projects, including the Awyren 5 and Starless IV, and formerly projects such as Aenopia High-Speed,[1] TES Conqueror.[2]

Helliwell Systems plays a significant role in the production of military equipment for the Empire of Aenopia and the Aenopian Defence League in particular. In the past, Helliwell and its predecessors have considered the concept of international export, significantly boosting the Aenopian economy. This would likely involve light attack and domestic aircraft instead of large aircraft such as the Awyren 5.

Helliwell focuses primarily on military aircraft production. The company's Awyren 5 fighter currently in an advanced stage of development is planned to serve as the main front line aircraft of the Aenopian Defence League, including the Aenopian Air Force, Aenopian Naval Force and Royal Knights. In the future, Helliwell may continue the Awyren fighter project with the Awyren 6. Previous aircraft developed by Helliwell included the Lupus ground attack fighter.

Previous naval projects in the past have included the conversion and eventual dismantling of TES Conqueror and the "Alpha and Beta" destroyers for the Aenopian Naval Force.[2] 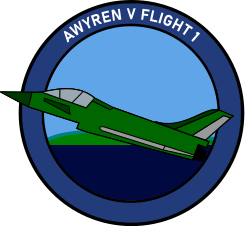 Patch of the first Awyren 5 flight, currently scheduled for no earlier than May 2021.

The Helliwell Awyren 5, (/ɒriːɛn/; English: plane)[a] also known as the Awyren V Headhunter, is an Aenopian single-engine, all-weather, canard delta wing, multirole fighter aircraft currently under development by a consortium of Helliwell Systems and the Aenopian Aerospace Administration for the Aenopian Defence League (ADL) and its branches, most notably the Aenopian Air Force and Aenopian Naval Force. Initially scheduled to enter service in 2020, the Awyren 5 has suffered from significant delays based on numerous factors such as budgets. The production aircraft is currently scheduled to enter service in mid-to-late 2021.

The aircraft's development effectively began in May 2019 as part of a trade deal between the both-defunct states of the Empire of Emosia and New Cymru. This trade deal was quickly cancelled, however, the aircraft project was formally adopted by the New Cymrunian Government under the name of the Awyren 5. The Aenopian Government began studies into the development of a multirole fighter in late 2019, resulting in the project being revitalised by both the Aenopian Government and Marco, in December 2019.[3] Initially, it was planned for the ability to export the aircraft to members of the North Atlantic Defence Union, however, this was cancelled partially due to the dissolution of NADU in December 2019. The first flight of the prototype, named Awyren E05, is slated for May 2021 to coincide with the 2nd anniversary of the project.

Development of the Awyren 5 originally began under Marco during late 2019 and 2020, however, would transition to Helliwell Systems following the merger of numerous companies under the Nationalisation of Aenopian Companies Act.[4][5] 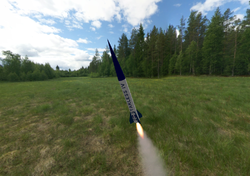 Starless IV[b] is a reusable currently under development designed and manufactured by a consortium of Aenopian Aerospace Administration and Helliwell Systems. Development of the rocket began in early January 2021, with the rocket being formally unveiled to the public on 21 January 2021.[6][7] Its name is derived from the King Crimson 1974 album of the same name, and the name of the Starless program as a whole. The Starless IV, as part of the Starless launch family, is regarded as one of two flagship projects of the Aenopian Aerospace Administration alongside the Helliwell Awyren 5. Development of the Starless IV project is also supported by the International Aerospace Community.[8][9]

Starless IV will utilise concepts developed for the Nova project, such as universal motor capability to exchange different motors based on individual launch needs. Flights will take place at New Llandudno Spaceport. Two launches are confirmed to take place in 2021, "Test for Echo" and "Take Two", with a further 3 planned.[c] The first 2 flights will be test flights to verify development simulations and test the vehicle in flight.

The Starless IV will consist of one stage. The first stage is intended to be powered by a D12-7 solid rocket motor produced by Estes Industries, producing 29.7N of thrust.

As of 24 January 2021, there are 2 confirmed Starless IV flights, with a further 3 flights planned. Out of the two planned flights, both will be test flights. These are in order of launch...

Green cells denote that the flight is a test flight.