The Empire of Aenopia is made up of 5 non-contiguous enclave territories surrounded by the counties of West Yorkshire, Derbyshire and Shropshire in the United Kingdom. The Empire is split into 2 main sections: North Aenopia, which includes the Territories of Greater New Aberdare and New Llandudno and Subsidiaries, and South Aenopia, which includes the territories of Bryniau Gwyrdd, Aenopian Calver and Aenopian Teme. Dependencies and dominions are covered under a 3rd minor section titled Her Dependencies. It is estimated that the Empire of Aenopia (excluding Aenopian Plushunia) makes up about 14,140m² (3.494 acres). 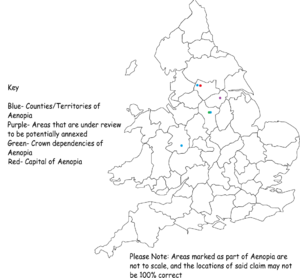 Aenopia within the United Kingdom

The total surface area of the Empire of Aenopia is approximately 14,140m² (3.494 acres). Aenopia has one territory in each British county, with these being: New Llandudno and Subsidiaries and Greater New Aberdare in West Yorkshire, Aenopian Calver in Derbyshire and Aenopian Teme in Shropshire

Most of Aenopia is empty grassland, with at least 28% being covered in trees. Land is generally flat and has no distinctive natural features, except for Aenopian Teme which is located on top of the River Teme, hence the name. The vast majority of Aenopia's surface comes from the New Llandudno and Subsidiaries and Aenopian Calver, which consist of large fields as well as some medium-sized wooded areas, and are completely uninhabited.

Aenopia, like the rest of Great Britain, has a temperate climate. Temperatures are usually within a range of 2 °C - 7 °C in winter but can drop as low as -11 °C. In summer, the average temperature range is 12 °C - 21 °C, but can rarely reach as high as 33 °C. Winters are characterized by rain and, in recent years, large downfalls of snow. Summers are warm and humid with occasional heavy rainstorms, however, there are usually only about one or two thunderstorms per year.[1] The record temperature recorded in Aenopia is 40.2 °C in New Llandudno, however, the accuracy of such is often questioned.

The Empire of Aenopia is made up of its home region or 'country', simply called Aenopia, and its colonies and territories. This is commonly located in New Aberdare, the new capital of Aenopia due to its location. The country plays an important role in the administration of the Empire due to the ease of control. Finally, The country also has a position of nobility attached to it, however, this position is part of the Monarchy.

The next level of administration is Regions. The country of Aenopia contains two regions: Northern Aenopia, situated in West Yorkshire, and Southern Aenopia, situated in Shropshire and Derbyshire. The nobility attached to regions are known as Presidents. They have little power over their regions other than the ability to appoint the Governors of the provinces within the region. They also appoint councilors to the region's council. This has a larger amount of autonomy than the President, however, does not have more autonomy than the Emperor himself.

Colonies are autonomous, inhabited areas of land outside the country of Aenopia. Currently, there are no colonies outside of Aenopia, however Aenopian Plushunia is a Plushunian Crown Dependency which is located between the cities of White and Sough within the territory of Aenopian Calver.[3]

The Culture and Tourism Department is in charge of keeping statistics about the number of tourists that visit Aenopia each year. Locations of historical or cultural significance are listed as Protected areas, however the only Protected area right now is 'The den' outside of New Llandudno and next to New Llandudno Joint Airfield.