The Philmont Confederation, more commonly known as Philmont, is a micronation that is made up of 3 constituent countries of Philmont Prima, Castello di Roccia Lago and Due Marchi.

The name Philmont derives from Philmont Scout Ranch where much of the nations claims are. The ranch was names after Waite Phillips who gifted the ranch to the Boy Scout of America.

Philmont was founded on 17 October 2020 as the Hillenbrand Republic by Edward Oaches who placed General Sebastian Gustavo as Prime Minister. The nation claimed the Littleton neighborhood of Trailamrk and the surrounding plaines and foothills. The highest peak being Peak Hillenbrand.

The Hillenbrand Republic took over Hillenbrand Ranch and a D.I.Y. flag was raised. On 6 February 2021 General Gustavo kicked Edward out of the government and established the Philmont Confederation with him as Head of State and Head of Government. The Hillenbrand Congress was de-established and the Legislator of the nation became the Military council and a dictatorship was established.

The confederation’s first act was to claim Philmont Scout Ranch and a Scout camp in Wisconsin as anti-weg Radicals joined the nation. Three capitals were established, a Legislative capital of Based Camp, a military capital of Woodside Military Base and the presidential capital of Fairview.

Conscription was introduced to all citizens and the Confederation is now referred to as a police state. On 17 March 2021 the confederation created the Urraca Pact with allie Rodentia. The Foreign Legion of Philmont stationed themselves at Pact High Command in Rodentia. Philmont helped with an invasion in the Rainbowlands and is planning a new constituent country in the Des Plaines Valley Sector.

Philmont is considered a dictatorship as there is no distribution of power as everything is owned or controlled by the military of Philmont.

There is no police or justice system in Philmont. Considering your crime you will either be “executed” at by the military with airsoft guns.

Philmonts greatest ally is the Empire of Rodentia as both are members of the Urraca Pact. Philmont is planning to join the discord community and the Micronational Assembly.

The Philmont Military according to the Philmontian government is the largest military in the Weg Associated Sector. However the Weg Foreign Intelligence Agency says that it is not.

Philmont is located across the United States, however their main district is of Philmont Prima. 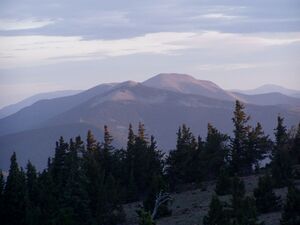 Mount Baldy, from the peak of Mount Phillips

Philmont Prima is located in the Sangre de Cristo Mountains of the Rocky Mountains of New Mexico. There are no mountains to the south or east of Philmont Prima. The interior of the country is mountainous but a small part of the eastern area is prairie.[1]

Philmont Prima’s lowest point is the southeast corner at 6,500 feet (2,000 m) and the highest point is the peak of Baldy Mountain, located on the country’s northwest boundary, at 12,441 feet (3,792 m).[1][2] Aside from Baldy, the country contains a number of prominent peaks. The South Country is home to a series of six difficult peaks, namely Mount Phillips, Comanche Peak, Big Red, Bear Mountain, Black Mountain, and Schaefers Peak, as well as Trail Peak, to the wreckage of the crash of a B-24 bomber in 1942 near its summit. Of the country’ various peaks with trail access, Black Mountain is widely considered the most difficult, followed closely by Baldy and Big Red.

The most recognizable landmark is the Tooth of Time at 9,003 feet (2,744 m), a granite monolith protruding 500 feet (150 m) vertically from an east-west ridge. Tooth of Time Ridge, and the latitude line on which it sits, marks the boundary between the central and southern sections of Philmont. The boundary between the central and northern sections is around Philmont Mega Highway, which runs just south of the narrowest part of the 'I'-shape, which is only a few miles across. Other prominent landmarks on the ranch include Grizzly Tooth, Window Rock, Deer Lake Mesa, Wilson's Mesa and Urraca Mesa.

Due Marchi is located in Littleton. The eastern part of the country is all prarie while the Western edge is the beginning of the Foothills.