At the present, the head of the state is the Queen of North Barchant Anna Macco, whose legitimacy has been confirmed and enshrined by the Parliament and the people.

Early History of the Kingdom of North Barchant

The Kingdom of North Barchant resulted from dedicated labour of the group of people, which took part in rescuing the team of sailors being trapped in May 2010. Their ships were left without support in the waters of the Atlantic Ocean.

The group of international volunteers and human rights defenders took part in the destiny of the sailors and solving their problems. As a result of the well-coordinated work of volunteers, the sailors were able to return home.

It was then that the idea of establishment of a new state as a full platform for human rights protection and uniting. On September 15, 2015 the Kingdom of North Barchant was proclaimed as an independent microstate.

On September 15, 2015, the Kingdom of North Barchant was proclaimed as an independent microstate.

The Kingdom of North Barchant is a Virtual State

At the end of 2018, a decision was made to establish a new format of microstate existence, which included, in particular, refusal of symbolic territory and creating a completely virtual state.

The Kingdom of North Barchant has moved to a new qualitative level of its development and for this purpose, new state web portal equipped with forum, news feed and a number of other important functions allowing citizens to interact with each other, was created.

In the new format of virtual state, the Kingdom cancelled the Parliament and each citizen got an opportunity to represent his interests directly.

The most important achievement may be the development of the Constitution of virtual state North Barchant from nothing, which was published on the official website of the Kingdom. This unique document can be considered to represent libertarian ideology being a political foundation of the state of North Barchant.

2019 is connected with the implementation of the new model of the existence of the Kingdom of North Barchant, integration of virtual and actual forms; wherewith active virtual interaction a network of actual social contacts have been formed. As a consequence, several meetings of citizens and members of the government were held as well as some large events were arranged with the support of North Barchant.

During the same period, many famous persons become citizens and some of them become ministers. For example, the Minister of Sport is the chess grandmaster Evgeny Sveshnikov and the Minister of Culture is the pianist Gleb Korolev.

Since late 2019, the Kingdom of North Barchant has started an active charitable activity, supporting a great number of various social and cultural projects aimed at positive change of the world. As a result of financial assistance, such projects as buying New Year's presents for the beneficiaries from Lighthouse Charity Foundation from Children’s Hospice unit, assistance when laying water pipeline in disabled animal shelter “Right to Life” in Voronezh, supporting work of social canteen for needy citizens in Kyshtym, providing material assistance to Humanitarian Aid Centre “Save Life” in Prokopyevsk and many others, have been implemented.

Under the conditions of spreading coronavirus disease, the Kingdom of North Barchant is actively participating in activities in the field of information and awareness creation, involving the leading specialists of the virtual state and supporting various public organizations, which continued to work and render assistance during the pandemic.

On May 22, 2020, by the order of Her Majesty the Queen Anna Macco, the Prime Minister of North Barchant has signed a decree establishing the Kingdom's new government agency, i.e. the Ministry of Post. The head of the new department is a traveller, researcher, winner of the national award of the Russian Geographical Society, author of the project "Ministry of Marine Bottle Mail" Valery Sushkov.[1]

In August 2020 the Post Office Department of the Kingdom of North Barchant with contributions from The Department of Sea and Bottle Post and the International Maritime Club "Moreplavatel" has released a unique philatelic series "Seaman". It consists of 40 postcards and maxicards (postcards with an art stamp and special cancellation), with images of 40 prominent sailors and explorers of the Far East. The series includes both famous personalities of the past and our contemporaries.[2]

Almost all personalities are presented at philatelic products for the first time. Each postcard, maxicard and art stamp (vignette) are limited edition and rare for collectors of maritime products. 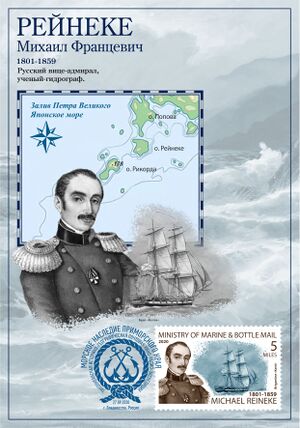 At the moment, with the permission of the head of state, Queen Anna Macco, The Department of Immigration and Naturalization pursues a two-step policy of granting citizenship in order to expand the multinational family of the young state. We see no obstacles in granting the citizenship of the Kingdom of North Barchant to any honest and freedom-loving person, who expresses their will and desire, and also is ready to follow the Constitution of the Kingdom of North Barchant. 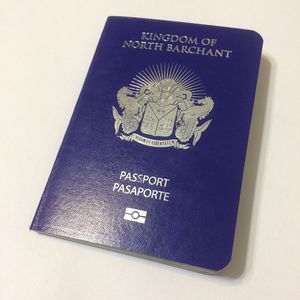 Passport of Kingdom of North Barchant

As a result of the referendum on the state language, conducted on January 5, 2016, the status of the official languages of North Barchant is assigned to English, Russian and Spanish. In addition, the official website has been translated into German, French and Chinese.

The state of North Barchant is ruled by a monarch (now – Queen), whose power is limited by the constitution. The monarch forms the government accountable to the monarch and the Parliament. Legislative functions are performed by the unicameral parliament, formed at the General Elections on December 5, 2015. There is no army in the Kingdom of North Barchant, and security functions are incumbent on the Department of State Security and their voluntary assistants.

North Barchant conducts the policy of non-interference in the internal affairs of sovereign countries. The state remains neutral in relation to all military conflicts but strongly condemns terrorism. North Barchant has no territorial claims to any legal entity under international law and is not involved in international litigation with anyone. In carrying out the foreign policy, the Kingdom of North Barchant adheres to the principles of neutrality and independence. The country is not involved in military and economic organizations. The Kingdom of North Barchant is committed to caring for the environment and participates in various environmental campaigns 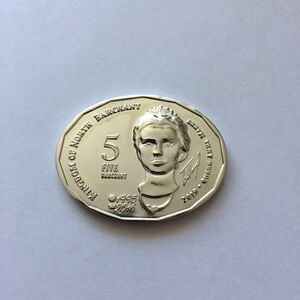 In North Barchant, there are people from many countries of the region. Uniting of various traditions resulted in the original culture in which one can discern the voice of each ethnic group.

The church in North Barchant is separated from the state. The population professes Christianity, Islam and Judaism.