From MicroWiki, the free micronational encyclopædia
(Redirected from Duckionary)
Jump to navigation Jump to search 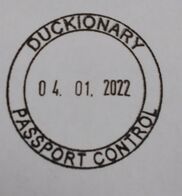 Duckionary, or the Parliamentary Monarchy of Duckionary, is a micronation formed on 24 August 2018 by Arthur C. de Tourneau, its current head of state. The nation possesses a liberal constitution that supports a parliamentary form of government, led by interior minister Fabius M. de Tourneau. Consisting of approximately 35 citizens, the micronation claims a total area of some 4.35 sq. km. The capital is Panagua, and the official languages are German, English, Latin and Esperanto. Other regional languages spoken by citizens are Spanish, French and Portuguese. The currency is the Duckaten, and the national anthem is "Our Fatherland." The national holiday falls on 24 August, the day the country was formed. Duckionary is a signatory state of the Union Against Micronational War. The nation also maintains a varied footprint on the Internet that serves as outreach to potential citizens and partners (see below).

In 2022, signs were erected in Duckionary and an Archducal Office was built.

The national flag of Duckionary is a black, red, and blue tricolor with horizontal stripes.

Duckionary maintains TV and radio stations online on YouTube. These services may be accessed by the public at Duckionary Government YouTube channel.

Orders, Ribbons and Awards of Duckionary

Duckionary is also one of the organizers of the Micro-Euro-Summit 2022.

It is planned that Duckionary will attend MicroCon 2023 Ypres, Micro Euro Summit 2023 and many more meetings in 2023.

Relations with micronations and sovereign states

Duckionary retains active diplomacy with the following micronations, with more to be added as the page is expanded:

Chyše Charter on the Differentation of Micronations and Similar, but Hostile Entities and Micronational Conduct (25 June 2022) 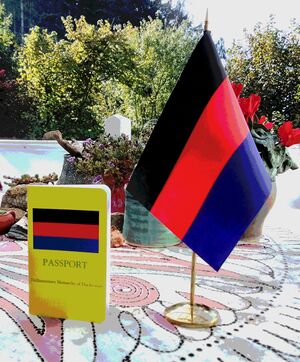 Passport and Flag of Duckionary