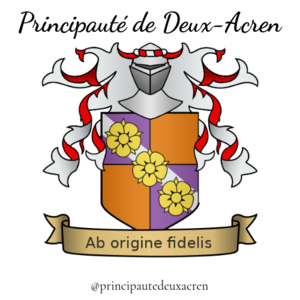 Coat of Arms of the Principality of Deux-Acren

The Principality of Deux-Acren, commonly referred to as Deux-Acren, is a small sovereign state located on the edge of Dender, Hainaut, Belgium. The micronation is of sociocratic type. The nation was created in September 2019, in the Belgian province of Hainaut, Belgium. As a non-secessionist state, it intends to promote the cultural exception of its citizens, through a unifying reality for the benefit of its citizens. A regent and his various councils see to the smooth running of this benevolent state.

Heir to the feudal lordships of Hainaut, the Principality of Acre has its political origins around the 11th century. Mentioned as Akerne in 1179, Ancrene in 1188, Akrene in 1248, Akeren from 1270, Mercator gives it information on one of his maps in 1540, under the name of Okeren. Acren would derive from the Dutch 'Akker', the fields (the English term 'acre', although obsolete, remains a territorial unit of measurement).

Deux-Acren was then made up of a main parish, that of 'Grand Acren': Saint-Martin, already the subject of an important pilgrimage to the Virgin. In the second half of the 12th century, a second parish was created in 'Petit Acren', dedicated to the cult of Saint Géréon. It was on May 16, 1804 that these two territories merged to create a unified 'Deux-Acren'. This was ratified by the abolition of the parish of Saint-Géréon in 1828. Deux-Acren was then French, and recognized as a municipality in its own right. The church of Saint-Géréon is destroyed, only its rooster will join the main bell tower still located in the heart of the Principality.

During the definition of the linguistic border in 1963, Deux-Acren will lose the territories of the hamlet of Akrenbos (17 hectares in favor of Bever), the hamlet of Donkerstraat and Haie-de-Viane, in favor of Viane. Hamlets claimed by the Principality today. Deux-Acren remains an independent and autonomous municipality, proud of its commercial and social life. The death knell of its autonomy sounded in 1977, when the merger of the communes saw it subject to Lessines. Despite many demonstrations, the decision will be ratified. The Principality intends to perpetuate the cultural specificity of Acre. 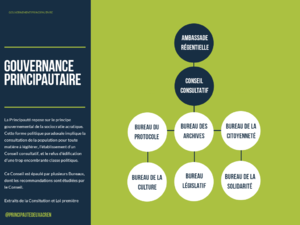 The Principality of Deux-Acren is, according to its constitution, a federated state entity. As a sovereign state, it claims the right to self-determination. This principality state evolves on the sociocratic model. It is governed by a Prince-Regent and an Advisory Council in charge of various offices.

In customs and monetary union with its neighbors and the Kingdom that hosts it, the Principality recognizes the Euro. It hosts the Belgian postal services but offers its official stamps in a non-binding way.

Anyone can choose to become a citizen of the Principality. As long as she approves its Constitution, works to promote its values ​​and resides on the territory of the Principality, she is recognized as a citizen. This citizenship application is free; only processing fees may apply in the case of production of supporting documents.

As a state entity, the Principality intends to develop diplomatic relations with other states. In particular, it wishes to maintain a fraternal understanding with other micronations from the Francophonie and the rest of the world.

Main article: flag of the Principality of Deux-Acren

Until the French Revolution, Deux-Acren passed through the hands of several seigniories who marked Deux-Acren with their family coat of arms or their aldermen's seal. We will note in particular those of the families of La Barre, then of Croy. As well as that of Jean-Baptiste Taintenier, yellow and blue, last lord of Grand Acren. However, heraldry retains only a double seal with mysterious origins. This one actually comes from Mr Josse Clemmen (Oudenaarde), who bought the seigniory in 1787. This seal is surmounted in 1791 by an antique baron's crown; Emperor Leopold II authorizes it as the official seal of Acren Saint Géron.

In 1910, the communal council of the unified commune of Deux-Acren wished to reintroduce the use of a coat of arms. He suggested using that of Clemmen, attached to that of de la Barre. In 1912, the district commissioner of Soignies delivered his verdict, based on the conclusions of the Heraldic Council: this bipolar construction having never taken place during the unification of the two Acren, it was deemed inadmissible. Rebellious, the town still had a seal engraved with the arms of Lord Clemmen and his wife. Until 1918, still attached to Flanders by the German occupiers (until the Armistice), it used a unilingual Dutch seal. In the spirit of its wish of 1912, the Principality endowed itself with a coat of arms which takes up elements of the Clemmen and de la Barre families (the roses, the variegated Barre), and recalls its seigniorial origin (the helmet). It also features Dender (silver) as well as two later colors still well represented in local folklore: white and red.