Matthew Hubbard (born 2 December 2004), is a British born Australian micronational politician, musician and businessman who has previously served as the king of Matthewopia, and currently holds numerous positions within the Empire of Lehmark, Vishwamitra and the Micronational Olympic Federation, as well as serving as an administrator on MicroWiki.

Matthew was born in Sussex, England on 2 December 2004, where he and his family lived for a year after his birth. His entire family then moved to Perth, Australia, where he attended a kindergarten and his sister was born. As a child, he demonstrated a great interest in how both the natural world and human society to function. Among the games he played when young, one was in which he pretended to rule a kingdom in his backyard. As he advanced through primary school, he exhibited a strong interest in the arts, particularly in music and demonstrated competency in most academic areas. Matthew started to become familiar with micronationalism during his time playing the computer game NationStates, discovering Sealand.

In February 2018, Matthew was admitted to Banksia Park International High School, a government school in Adelaide. His first few years of music lessons set his eyes on an interest in music.

Matthew currently resides in Adelaide, South Australia. He is a Venturer Scout. Matthew contributes to other wikis such as Microwiki, Wikipedia and Wikimedia Commons. 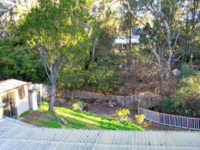 The backyard that Matthew claimed for Matthewopia.

Matthew first learned about micronationalism by learning about Sealand in the computer game NationStates, in which it was described as the world's smallest country claiming sovereignty. This led Matthew to seek out more information about the principality online, which led him to discover the broader concept of micronations. Inspired by Prince Roy, he soon decided to start his own country. He planned its creation slowly over more than a year and a half on an old laptop he got for his birthday. He claimed his own backyard as the first territory of Matthewopia, then expanded it to a small island of the coast of Adelaide, South Australia.

Throughout his reign until the dissolution of Matthewopia, Matthew took an active role in government, crafting a variety of policies and composing most legislation. He presided over several major changes in the Republic's government: the establishment of Matthewopia Day to celebrate the nation's founding day, the creation of the national song ('Pingarni Fauna'), and the enrolment of the nation in the Micronational Olympic Federation. Matthew prioritized building Matthewopia identity, economic development, and establishing informal relations with other micronations. As King, he also served as Commander-in-Chief of the Royal Matthewopia Navy and as a diplomat.

Matthew began editing MicroWiki on 30 April 2019.[1] As of May 2021, Matthew had made over one thousand edits to MicroWiki[2], which ranks him 70th in Users with the highest edit count. Matthew became a patroller on 14 May 2021, before Administrators abolished the position. Matthew founded MicroProject Translate on 29th May 2021 to promote language diversity on MicroWiki and make it more accessible to micronationalists around the world, as well as the Hubbard System, an article grading system.

Currently, Matthew is a wiki administrator on MicroWiki.

Matthew has held a variety of positions in Lehmark. Matthew was appointed Director of Marketing after the position was created. Matthew was made a Baron of the Empire of Lehmark on April 20, 2022.