The foundation took place on 18 July 2019 in the capital and hometown of Thomas Marios I, who declared the de facto independence of "Græcia" and crowned himself as King. The lands of the Kingdom of Græcia downsized to Agrinio (capital & hometown of the Imperial Family) and Florina (hometown of the family of the Queen Mother).

The absence of social media and the cyber micronational community caused inactivity. Thus, the Monarch resigned on 21 August 2019. Since then, there was no activity, plus the Sovereign had an abstention from micronationalism. 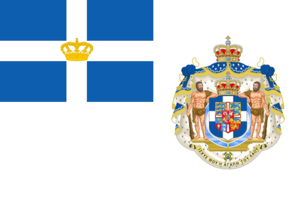 Flag of the Kingdom of Graecia

On 2 October 2019, the Sovereign of Græcia declared the de jure independence and crowned Vasiliki I Empress. On 10 November 2019, she was diagnosed with dementia, and her son George was declared regent, but he immediately declined the axiom. Consequentially, Vasiliki II was crowned Empress on 27 November 2019. She resigned on 8th December 2020. The Crown Prince was appointed regent until his coronation on 1 March 2020.

Thomas Marios led the country until 21 April 2020, when he suddenly left Ovrestlia. His last action was to form a regent triarchy, included Aggelos I of Imvrassia, Alcibiades I of Imperium Aquilae and John of Baustralia. Two days later, he returned to the throne and reformed the Empire into a diarchy with himself and Alcibiades I as Emperors. As of 6 May 2020, it became a constituent state of the Empire of Lysimachia.

Lysimachia had expanded its diplomatic relationships a lot. Some notorious micronationalists took part in political life, like Edward I of Ashukovo and Manolis Afentoulis. Tom Mark was the only Prime Minister leading the Conservative Party. It's noteworthy that elections were held in the span of 5 days. Also, the governments of both empires still existed; however, they were referred to by the Senior Government as federal councils. Edward I led the Opposition with the Juche Party, supported by Manolis Afentoulis. 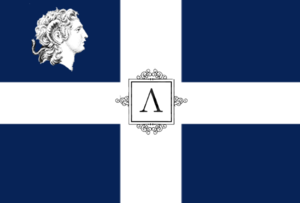 The dissolution of Lysimachia caused a spying scandal that made the Diarchy conflict. A citizen tried to educe some secret files by Tom Mark. The spy was taken to court by authorities. Some minutes before, the citizen avowed to Thomas Marios that he was the Prime Minister and the account of the "citizen" was an alternative one. Tom Mark verified the rumour by using his official account. Despite the facts, the trial took place without any issue. After the Emperor's demand, the Supreme Judge covered the truth to avoid a political crisis.

A week later, a user showed up in the Discord Server, pretending to be the Chancellor of Imperium Aquilae, Christos Sevastianos. The Diarchy and the Prime Minister agreed to give him the necessary files to have an opinion on the progress of the Empire. After collecting the secret files, he admitted that he was an old enemy of Alcibiades I. He showed the files; therefore Prime Minister requested a resignation, which the Emperors declined. A fight began between the Diarchy, blaming each other for the crisis. After that, Alcibiades admitted to Thomas Marios that he was the spy. The conversation was published, but the government-supported Alcibiades. The troubles continued, ending up with the withdrawal of Ovrestlia.

After the dissolution of the Empire of Lysimachia, a new crisis arose. The Head of the State violated the TOS of Discord and discovered after the request of the Empire to join Grand Unified Micronational. The diplomatic relationships stopped growing. Ovrestlian authorities had weren't on social media. As a result, the political crisis continued. Nothing was under control. Fortunately, November 2020 boosted stability; a permanent government formed, the designation of a website, some accounts on social media manifested the country. Also, since 18 July 2021, His Imperial Majesty was able to join Discord again. Which fortunately caused plenty of new citizens & diplomats.

The Grand Clisthenium Council took form on 2 October 2019. Its purpose was to give people the right to vote and elect one leader with democratic expedients. With signing the Fiche of Independence, Vasiliki I appointed Thomas Zavos as Magister of the GCC; however, on 6 October 2019, GCC was divided into two councils with different purposes.

Since the foundation of the Empire, the Sovereign is responsible for diplomacy. The first official diplomatic contact was with the Empire of Imvrassia, a Greek micronation on the Greek island of Samos. By entering Discord, diplomacy expanded a lot. Countries that helped Ovrestlia with diplomacy are Orientia, Baustralia, Ashukovo, Herba (now Aramco), Rhodesia etc. After leaving Discord, the connection with diplomats was via e-mails. Momentarily contact is usually via Discord and e-mails.

No official recognition (by Ovrestlia)

A panorama photo from Kalana, the highest mountain of Ovrestlia.

The climate of Ovestlia is mild in the principalities of Trikki, Akarnania and Athens. The lowest temperature reached in Ovrestlia is −28 °C (−18 °F). In Toronto, summers are hot and wet, and in winter, the temperature is usually below 0 °C (32 °F).

Around 85% of the territory is lowland. The highest mountain in Ovrestlia is Kalana (or Kanala) and is situated on the Principality of Akarnania, in the Grand Duchy of Valtos. Its height reaches about 1.5 kilometres (0.93 miles). The largest plain is Thessaloniki-Giannitsa's plain. It situated in the Principality of Macedonia.

The first & second-degree school facilities of the Empire belong to the Hellenic Republic and the other countries which Ovrestlia has landed. They are unofficially part of the Ministry of Education & Youth and the young inhabitants of the Empire register with the citizenship of the macronation they live.

Ovrestlia owns only one Third-Degree Institute, called the Ovrestlian Pandidaktirion Foundation, a covey of different facilties.

The state is divided into Principalities, Duchies and Counties. It has 6 Principalities, 14 Duchies and 33 counties. That decision passed after the 1st meeting of the Upper Clisthenium Council, on 6 October 2019. There is also an autonomous state, in Brazil.