The Penn Federal Republic, (Spanish: República Federal de Penn, Hindi: पेन संघीय गणराज्य) more commonly known as the PFR, is a micronation[1] established in Pennsylvania, United States. The micronation was started by musician and Twitch streamer Devin Purcell. The Penn Federal Republic is a Federal Republic, following the ideals of democracy and federalism and has established a constitution.[2] The most widely spoken language is English. The capital city is Medici City, a symbolic capital, which is located in Pennsylvania. It is a part of the Alliance of the Micronations, although it does not often participate in their affairs.[citation needed] The country is also a key member of the Pennsylvania Micronational Treaty Association, providing advice in other member's conflicts with other nations.

The Penn Federal Republic was established on 31 December 2020, by the nation's first President, Devin Purcell. Not long after the creation of the micronation, Devin Purcell recruited Vice President Kaiden "Stx" Wooten, and Head of Senate, Sampson Vennard. By 1 May 2021, the Penn Federal Republic has met all of the requirements of the Montevideo Convention. The nation celebrated its First Independence Day on 31 December 2021, with an announcement from President Devin Purcell.[citation needed]

On 7 September 2021, the government Twitter account[3] announced the mobilization of the Penn Federal Republic's armed forces in support of the Commonwealth of Dracul's government declaring war on the Principality of Graustark. At the conclusion of the Dracul-Graustarkian War on 8 September 2021, another announcement was released declaring the demobilization of the armed forces due to the peace agreement signed earlier in the day.[4]

The Penn Federal Republic mobilizes its forces in support of the @draculgov against the Principality of Graustark. The PFR offers full diplomatic and military support to the Dracul government.[5]

The nation held its first Presidential election on 14 July 2022, in which Devin Purcell successfully ran for reelection with a new running mate, veteran micronationalist Thomas Jacobs.[6]

On 28 November 2022, Vice President Kaiden "Stx" Wooten was impeached on grounds of inactivity over a period of several months. After his impeachment, Kaiden Wooten resigned all other positions, including as Minister of Defense, Representative, and Field Marshal.

On 29 November 2022, Representative Josh Elkind was impeached on grounds of inactivity just one day after the removal of former Vice President Kaiden Wooten. He retained his position as Consul to Chicago, Illinois.

The Penn Federal Republic, recognizes most established macronations, including all of the United Nations Member States, Israel, the State of Palestine, and Taiwan. The Republic's diplomatic status with the Israel-Palestine situation in the West Bank has drawn some criticism from others in the micronational community, especially with only supporting Palestine, from the 17-21 of May 2021. On the 21 of May, the Penn Federal Republic recognized Israel as well as Taiwan.[citation needed]

Alliance of the Micronations

See also: Alliance of the Micronations

On 19 November 2021, the government Twitter account for the nation announced that there was an ultimatum delivered to the offices of the President from an Irish micronation known as the Penn Federation.[11] It was also stated that on the 13th of November, there was a referendum of the citizens of the nation about whether the government should accept, and change the country's name; or decline, and potentially be involved in a micronational war. The referendum passed with 66% of the vote in favor to keep the name. Shortly after the results were delivered to the Penn Federation, the Offices of the President reported that the Penn Federation backed down, with President Devin Purcell quoting former British Prime Minister Neville Chamberlain, saying "Peace for our time."

The Penn Federal Republic has a culture similar to the United States, which the nation borders, although there are distinct national identities. The national animal is the common household pet of a dog. The national drink is lemonade, a combination of lemon, water, and sugar. Popular brands of the national drink that are consumed in the nation are Minute-Maid and Tropicana.

In the Penn Federal Republic, the population grew slowly until a short boom in population in early 2020, with citizenship count doubling to 23. According to recent census data, 75% of citizens are Caucasian, 12.5% are Asian, 8.3% are mixed, and 4.2% are other.

The Penn Federal Republic has two national sports, Chess and Checkers, both tabletop games. Another sport many citizens participate in is that of eSports or competitive video games. The PFR hosts a checkers tournament bi-yearly, where representatives from other micronations compete in the game. The Penn Federal Republic does not have an eSports team, but rather individual people who compete in a tournament-style bracket or in small groups of two or three. The main games played are Minecraft, CS:GO, and more.

The Penn Federal Republic maintains a Twitter account[3] where official press releases and other news are posted. In addition, the government owns an Instagram account to advertise and publicize the quality of life within the country. The constitution of the Penn Federal Republic[12] allows for free speech and free press, so there are many publications owned and operated by the public. The most prominent news outlet in the nation is the Penn Press, published by John Richards.[13]

The Penn Federal Republic does not maintain a standing military, but rather an organized militia that may be called upon when necessary to the well-being of the nation. Most matters require the standing police force, not the military. Despite that, the militia is still structured as a standard army, with regiments and a leadership structure.[14] Under the Purcell Administration, the military has been neglected compared to other efforts. The Ministry of Defense oversees the organization and operations of the military. 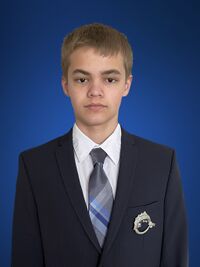 The Penn Federal Republic was established as a Federal Republic, to uphold the ideals of democracy. President Devin Purcell created several political parties[15] to endorse the idea of a multi-party state, which is better than the "problematic two-party state" President Devin Purcell has proclaimed.[citation needed] The most active political parties are the Constitutionalist Party, the Populares-Conservatives Party, and the Penn National Party.

The country's elections are held every year on 14 July, and citizens vote for the position of President and Vice President every two years. Members of the Senate are elected every four years. After ballots are finished being cast, they will be audited for any instance of fraud or duplication.

The Penn Federal Republic issued the orders for the creation of several awards to grant to various individuals, whether citizens or non-citizens of the nation. They may be issued by the nomination of any government official and approval by the sitting President.

The Penn Federal Republic is committed to keeping the citizens of the nation safe. To achieve this goal, the nation must protect its citizens against the 2020 COVID-19 Pandemic, as well as any other public health crisis that it encounters. The Penn Federal Republic has no reported cases of Coronavirus (COVID-19), and boasts the best vaccination status out of any sovereign state, at 100% of its citizens fully vaccinated, having received two doses of either the Pfizer or Moderna vaccine.

The spotted lanternfly (Lycorma delicatula) is a planthopper that is indigenous to parts of China. It has spread invasively to Japan, South Korea, and the United States. Its host plants include grapes and stone fruits, although its preferred host is Ailanthus altissima (Chinese sumac or tree of heaven). In its native habitat, L. delicatula populations are kept in check by parasitic wasps.

The spotted lanternfly life cycle is often centered around its preferred host Ailanthus altissima. Early life stages of the spotted lanternfly are characterized by spotted black and white planthoppers that develop a red pigmentation and wings as they mature. Early life instars display a large host range that narrows with maturation. Fully matured spotted lanternflies display a black head, grey wings, and red hind wings. These adults do not display any known associations with herbaceous plants but have been known to cause extensive damage to crops and ornamental plants.

The species was accidentally introduced into South Korea in 2006 and Japan in 2009, and has since been considered a pest. In September 2014, the spotted lanternfly was first recorded in the United States, and as of 2020, it is an invasive species in much of the Northeastern United States, including the Penn Federal Republic. The spotted lanternfly egg masses have been found to be the primary vector of spread, with Ailanthus altissima populations seen as a risk factor for further infestation globally. Ongoing pest control efforts have sought to limit population growth, due to the the spotted lanternfly poses to global agricultural industries.

In Penn, the spotted lanternfly was identified before the birth of the nation, in the summer of 2020, and has persisted to return to the republic every spring and summer. This invasive species was due to its presence in the macronational state of Pennsylvania.[17]