Micronational warfare is a term used by micronationalists to describe virtual or actual conflict between one micronational entity and another. Most 'wars' are waged jokingly and are not seriously pursued. The concept is usually confined to internet warfare, commonly known as 'cyber-warfare'. Some micronations have used various types of warfare throughout history, which has lead to different branches of conflict being identified. These include video games, airsoft combat and 'hacking wars'.

The definition of micronational warfare has evolved considerably since it was first coined. One of its first recorded uses was to describe the Molossian-East German War, a declaration of war jokingly made on East Germany for a variety of reasons including "...disruption of sleep". At present, it is used to define more than 'joke wars', as it is also used to describe a variety of other instances where micronational warfare is claimed to exist, such as the Atlantis Civil War.

The Halcyon Convention was the first known instance to declare official terminology and definitions for micronational warfare. In the first article of the document, it defines "war" as “the settlement of territorial or ideological dispute by means of armed conflict in mutual agreement”, alongside several other definitions for specific types of warfare and disputes.[1] 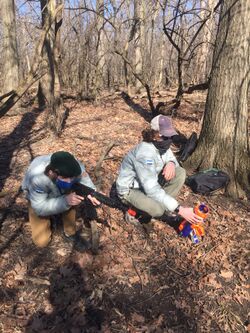 2 soldiers from the Wegmat Marines during the beginning of the Great Des Plaines Valley War.

This type of warfare is the most dangerous, as it risks intervention by macronational authorities. Possibly employed weapons may include martial arts (such as the Skirmish of Beddington Park) or guns. One of the most notable examples of actual combat taking place between two micronational entities was the attack and attempted coup by then Prime Minister of the Principality of Sealand, Alexander Achenbach, who stormed the tower with speedboats and helicopters, and took Paddy Roy Bates', the founder of Sealand, son hostage.[2] This is typically hard to implement due to how far micronations are in proximity. Another example is a real, actual war between Molossia and Mustachistan, the Molossian-Mustachistani war (With real, actual guns and infantry).

Airsoft weapons and Nerf weapons are sometimes used in physical combat. Some MicroWiki nations claim airsoft or nerf gun arsenals,[3][4] while some have allegedly been employed in battle, such as during the New European Civil War.

Weapons other than airsoft and nerf guns have also allegedly been used, including wooden replicas of swords and skewers.[5] However, at least four known instances with real guns have occurred. The first was the coup on Sealand, the second is the Molossian-Muaschistani war, the third was the terrorist attack on Akhzivland, and the fourth was the Munatopian conflict.

This type of warfare involves the parties involved in the conflict agreeing to meet at a field of battle, with combat then being controlled by specific de facto laws that evolved over time, since the beginning of the CEV). Combat may not include life threatening weaponry and weaponry must be used safely and cause no major injuries. Very few recorded usages of this type of micronational warfare exist, and Baltia is thought to be the only major user of this type of warfare. 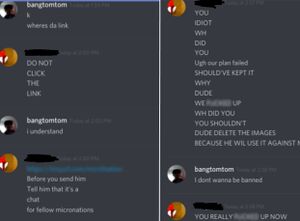 A common type of cyber combat is to send an IP tracker to track someone's IP. In this photo, Calvin White attempts but fails to get Tom I, Prince of Duke (bangtomtom) to send a link to obtain Aenderian officials' IPs.

The most common type of micronational warfare. This term is used to describe any sort of warfare conducted using a computer, almost always using the internet. 'War' may be waged using a computer game as a medium, whilst on other occasions, hacking has allegedly been used by combatants.[6]

Hacking Warfare has been allegedly used in several micronational conflicts, such as during the Rhodesian War. This warfare is considered to be quite dangerous, as it is illegal in most macronations. One of the few recorded alleged threats to use hacking in micronational war was during the Rhodesian War. The Government of Rhodesia threatened the Kingdom of Finismund with DDOS-attacks. The declarations were condemned by a number of micronations, although no proof was ever brought forward that during the conflict Rhodesia virtually attacked Finismund.

There are few recorded uses of video games or computer simulators being used to wage micronational warfare. Some games used include Battlefield, Grand Theft Auto IV, or any other shooting game that includes a multiplayer mode. One of the first recorded uses of a video game or computer simulator being used in the MicroWiki Sector was during the War over Micronational Communism,[7] when Sandefreistikhan used Microsoft Flight Simulator to simulate the bombing of Murrayfield.

'Recwar', a colloquial shortening of 'Recreational War', is used in simulationist micronations to 'wage' war, most notably in the Micras Sector, as a way of resolving disputes through conflict.[8] There are numerous variants, such as Anunia and SNARL, but the general principles remain the same. Essentially, a recwar simulates a war with the real life participants acting as the commanders for their nations.[9]

Cold war is considered to be the most common form of micronational war. This term describes conflict that involves no actual waging of war and almost always involves heated exchanges via email or other communication media. A physical conflict is usually not possible under these circumstances.

Edit wars (also called edit warring or edit warfare) is the intentional act of a government in condoning/participating in the vandalizing of wiki/media pages related to an opponent's micronation. The purpose of such attacks are to cause confusion and to spread misinformation. Most edit wars are resolved either through diplomacy or (such as in the case with MicroWiki) through disciplinary action by web admins.

Many micronations often criticise all or some aspects of micronational warfare, with some adopting official policies against the matter. Much of the criticism stems from micronations lying about all or some aspects of 'wars', such as the charges of "armed robbery and sexual crimes" against a number of citizens of the Republic of Atlantis during the Atlantis Civil War.[10] This and other dubious[11] claims made by a number of Atlantis citizens, sparked much criticism and mockery throughout from many micronations in the MicroWiki Sector.[12][13][14] Some, such as St.Charlian Home Affairs Minister, Heinrich Schneider, maintain that micronational wars are often merely attempts by micronations to "gain attention" in the micronational world, and no 'war' ever actually takes place.[15]

In July 2009, the Niels of Flandrensis founded the Union Against Micronational War which has 14 members. In January 2011, the Treaty of Universal Peace was written by the then Crown Prince Jonathan of Austenasia, which over 20 micronations are signatory to as of February 2013.

Alexander Reinhardt during the documentary on Operation Electrolight, which strongly condemned micronational war.

Operation Electrolight was a fictional war as part of an April Fools' Joke on April 1, 2011. The initial belligerents were the Federal Republic of St.Charlie and the Federated Republics of A1, who officially started during the first hours of April Fools' Day, following what was reported to be a violent argument between St.Charlian Prime Minister Nicolò Alvisi and Commander of the A1 Defence Forces James Erkenfield Wilary that took place on the evening of March 29. The entire 'operation' was fictional, and was prepared and put into place by Gordon Freeman, Alexander Reinhardt and a number of other micronationalists, designed to show the "fallacy of micronational warfare".[16] A short documentary was also made afterwards by Alexander Reinhardt, which investigated the reactions for the hypothetical war, focusing on the reactions to the conflict or to the April Fools' joke itself. After publication, reviews for the film were overwhelmingly positive, with generally good ratings on the MicroWiki Forum thread presenting the documentary. However, the video was criticised by supporters of micronational warfare for "lacking a coherent message".