From MicroWiki, the micronational encyclopædia
(Redirected from Republic of Atlantis)
Jump to navigation Jump to search

Not to be confused with the Kingdom of Atlantis or the Empire of Atlantium.

The Federation of Atlantis (Italian: Federazione di Atlantis), also simply and commonly known as Atlantis, was a federation of the Federal Republic of St. Charlie. Atlantis was formed de facto on 2 February 2010 and the capital city was Caprica, located in southern Italy. Atlantis, was formed by four provinces: Caprica, Freya, Venetia and the Atlean Antarctica.

The Republic of Atlantis was founded for the first time on February 19, 1995 by the Emperor Seth I of Edinburg. The first capital was Edinburg, but in the 1st January 2000 the capital was changed from Edinburg to London. The Republic was founded initially as a parliamentary monarchy. After an extraordinary decision taken by both Parliament and the Royal House has decided to make the Republic a presidential republic, 1 January 2000. That same day he also founded the oldest and most prestigious political party, the SocialDemocratic Party. On 20 January 2004 were major changes to the Constitution to make it more modern to contemporary needs. The First President of the new republic was Connor Eagle (of Scottish origin). The Micronation has made changes to the flag after the founding of the republic and again on April 24 of 2010, used until now. Now, from the 8th September 2009, the capital is Poseidon (oldest territory in Italy).

The 2nd February 2010 begins the rebirth of the Republic from ten years of inactivity. The rebirth was possible thanks to the President Alexander Specter that created a special committee and founded the project "rebirth" that tends to modernize and develop the Micronation. Indeed in recent years, Micronation had been left behind. In addition the Committee has created the Ministry for Development and Propaganda with the aim of developing Micronation. The Ministry created several websites and the page onMicroWiki. The Republic took part in the Second War for Victoria with it's allies against the Kingdom of Istoria. The 26th August 2010 the Council of Ministers have create the Atlantis Commonwealth for help young micronations in their growth. The 1st September the Republic enter in the AMU (Antartic Micronational Union). The 2nd September the Republic of Atlantis entered into the War of the Forest with the United Provinces Under Chance following a at the request at the World Micronations Alliance to support them in the war against Scandel.

The Atlantis Civil War was a civil uprising that took place in the Republic of Atlantis following the evening of September 13, 2010. It began after a motion of no confidence by Minister of Interior Sante Carbone and Minister of Foreign Affairs Gabriele Pellecchia against the leadership of president Alex Specter.

The loyalist side was led by Specter and most of the members of the legitimate government of Atlantis. The rebels, on the other hand, also known as the newly-created Socialist Federation of Makhnovist (previously known as the Socialist Autonom (sic) Republic of Atlantis), received the support of the AnarchoCommunist National Liberation Army, led by Sante Carbone. Following the partially successful uprise, Atlantis was left divided as supporters of the existing Republican government fought the forces of the new "Anarcho-Communist" faction for control of the country. As of mid-September no real change was made, and the capital of Atlantis, Poseidon, was split into two sectors, each of those controlled by one side.

Soon after the start of the conflict, both sides were quickly backed by military support. The Holy Salanian Empire and the Republic of Ultamiya gave support to the loyalist Atlantis on the day after the start of the war. They were backed in the following days by Starland, Emerald Isle, Los Bay Petros and Zurdonia. The Union of South London Soviet Socialist Republics also joined the war on the 22nd, however it later withdrew on September 25 due to a popular motion in the Supreme Soviet. On the other hand, the rebels gained support from the People's Democratic Republic of Pugguinia, the Draco Republic and the Tyler Revolutionary Forces, which however seemed to have disappeared days after the start of the uprising.

Days after its beginning, the Atlantis Civil War has been heavily criticized for the intervention of other micronations and the so called "military support" given by most of the belligerents on both sides. Foreign micronationalists protesting it include Marka Mejakhansk of the SFR Nemkhavia, Anthony I of Zealandia, Aldrich Lucas of Yabloko, Will Sörgel of Sandus and the National Party of St.Charlie, with both Reinhardt and Schneider condemning the war itself. Unlike in the Austenasian Civil War (often seen as very similar to the Atlantis uprise), several micronations have expressed neutrality towards the conflict.

Despite a division of the capital, an apparently rigged trial by President Eastwood, and the creation of a totally new micronation with the territories acquired by the rebel forces, the civil war continued for almost a month and a half. 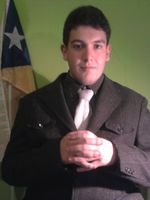 Atlantis was a unitary parliamentary republic since 10 October 2010, when the presidential system was abolished by a constitutional referendum. The President of the Republic (Presidente della Repubblica), currently Gabriele Pellecchia since 2010, is Atlantis' head of state. The President is elected for a single two years mandate by the Parliament in joint session. Atlantis had a written democratic constitution, resulting from the work of a Constituent Assembly formed by the representatives of all the anti-anarchy forces that contributed to the defeat of AnarchoCommunist National Liberation Army forces during the Atlantis Civil War. 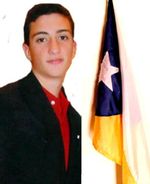 Atlantis has a parliamentary government based on a proportional voting system. The Atlantis Parliament is monocameral, with the Senate of the Republic (Senato della Repubblica), that have the legislative power. The Prime Minister, officially Prime Minister of the Republic of Atlantis (Primo Ministro), is Atlantis' head of government. The Prime Minister and the cabinet are appointed by the President of the Republic, but must pass a vote of confidence in Parliament to become in office. While the office is similar to those in most other parliamentary systems, the Atlean prime minister has less authority than some of his counterparts. The prime minister is not authorized to request the dissolution of Parliament (that is exclusive prerogatives of the President of the Republic) and must receive a vote of approval from the Atlantis Cabinet which holds effective executive power to execute most political activities.

Donato De Lellis, since 26 June 2011, has been Prime Minister, leading a center-right coalition. The Altantis' four major political parties are the Atlantis National Party, the Social Democratic Party, the Conservative Party and the Atlantis Communist Party. During the 2011 general elections these four parties won all the seats available in the Senate of the Republic.

Atlantis is today pursuing an active foreign policy, where human rights, democracy and other crucial values is to be defended actively. In recent years Atlantis had also some protectorates like the Confederate Protectorate of Andalusia, but after the Civil War in Andalusia against the fascist forces the protectorate had been abolished.

The Republic of Atlantis give great importance to the Culture of it's citizens. Atlantis has two Universities where citizens can learn various disciplines including History, Economy, Law, Theology, languages, etc. At the end of the courses, both Universities give a diploma.

University of the Republic of Atlantis

See also Flag of the Republic of Atlantis

From the 12th June 2010 the Repubblic of Atlantis also has a colony.

In fact the Nordisk Kingdom abandoned his independence to join the Republic of Atlantis. The Republic in addition to having inherited its citizens, territory and traditions has also inherited the "Scandinavian Alliance which brings together various Nordic Micronations. 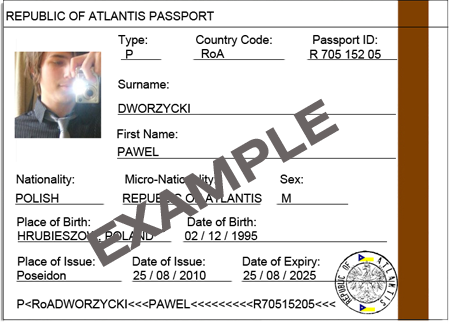 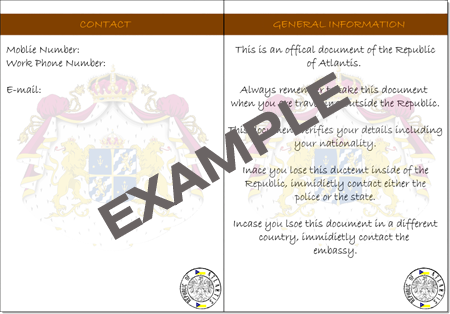