The United Federation of Thag is a democratic micronation founded originally as a high school civics project in 2011, on the principle that government officials shouldn't have any more power than their citizens, and that wealth and success should not have an influence on the government's work. Members of it's government have since done humanitarian and volunteer work, became members of PeaceJam, a Nobel Peace Prize nominated organization, and attended the World Summit of Nobel Peace Laureates in Chicago.

Originally named "The United Tables of Thomas, Hunter, Alex and Greg", once it was decided to turn a class project into a real country, tables was changed to 'Federation', implying the unity of the citizens. The authors of the original constitution abbreviated their names to 'Thag', so that it would be able to live on after their departure from the project.

The United Federation of Thag's constitution was written on October 30, 2011 as a collaborative effort, between two members of the Nobel Peace Prize nominated PeaceJam global community project, and two other students attending an American Government and Civics class. While brainstorming for a group project involving drafting a constitution, the group consented to continue authoring the document further, until it was five pages and over 1,500 words long. The obligation to continue the project had expired, but the group unanimously decided to form a country to adopt the constitution they had written, and on November 1, 2011, the United Federation of Thag ratified the document, marking the beginning of the new nation.

Conflict with the Federation Against Thag 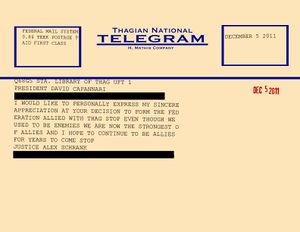 Originally, my opinion on Thag was very low, I did not like how they were advertising and trying to force people to join. But as it has grown, and as I have grown as a person, I have realized it is a great country, and a great nation with great leaders all around.[1]

In the spring of 2013, Harris returned from Vermont and convinced Capannari to disband the Federation Allied with Thag and resurrect the Federation Against Thag. Capannari and Harris declared war, but President Mathis has repeatedly stated that at this time it is his position that they are not a credible threat to the country's safety.

The United Federation of Thag is unique in that it can be both a direct democracy, and a representative democracy. A unicameral legislature directly represents the citizens, however if the vote is disputed, it can be voted on by the citizens themselves.

The Thagian government is divided into four branches, called Thections. Each Thection is intended to keep another Thection in check through specific limitations placed on each in the constitution.

States Recognized by the International Thection