Thomas Baltazar "Balto" Anaya is a Thagian professor and activist. On November 1, 2011 he was chosen at the ratification of the UF Constitution as the 1st Supreme Allied Commander of the Joint Thagian Forces and head of the International Thection of the United Federation of Thag. His term ends on the same date in 2015. 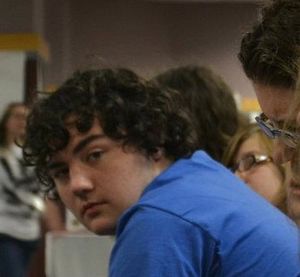 Anaya preparing to speak at a conference in 2012

Even though he has the power to establish a military, he has taken little action to do so, to the point where a war with FAT was fought primarily by him alone. Instead, he has chosen to set up SciTech, and is considering who to appoint as the citizen judge for Eucleides. He has previously stated of his lack of a defense force: "I see domestic justice and science as being more important then power over others, however the military is major concern that most be dealt with soon."

His council is currently made up of only him, and the Minister of SciTech Dani Timko. If Thag were to ever enter a military action, he would have no brigadiers to help lead the Thagian forces.