Caudonia (/kaʊˈdoʊniə, kɔː-/), officially the Principality of Caudonia (German: Fürstentum Kaudonien) was a micronation claiming to be a sovereign state located in North America and Europe, currently consisting of lands in Ohio, and Stockholm County, thus making it an enclave of the United States and Sweden.

The nation was currently reigned by Prince William I, who has reigned since the nation's foundation. The nation falls under classification 6 on the Boodlesmythe-Tallini Classification, making it a 6th world nation.

The name is derived from the Latin word for "tail." Tail in this context refers to Lake Erie, which was named by the Erie people, an indigenous tribe who lived along its southern shore. The tribal name "erie" is a shortened form of the Iroquoian word erielhonan, meaning "long tail".

Although the Principality of Caudonia was technically established on the 5th of July 2019, the 2nd of December 2018 is considered the founding date as it was the founding date of Vryland, the nation's first predecessor. Following the dissolution of New Albion, Vryland's successor state, the Prince initially decided he would take a break from the micronational community or even leave it, but advisors convinced him otherwise and he established Caudonia on the 5th of July.

The history of Caudonia can be divided into various eras. Caudonia was in the Era of Reconstruction. This era had been characterised by a moderate increase in activity and the removal of over a dozen inactive citizens.

Caudonia was a semi-constitutional monarchy with a parliamentary democracy, similar to that of Liechtenstein and Monaco. Prince William I is its prince and thus the head of state. The prince can exercise his princely prerogative powers, such as appointing and dismissing government ministers and judges, issuing princely decrees, commanding the nation's defence forces (the police), granting assent to legislation, summoning and dissolving parliament, and calling for elections and referendums. As Caudonia has a form of mixed constitution, the prince can and often does exercise his powers at his discretion, as opposed to only exercising his powers with the advice of ministers as in other countries that use the Westminster system.

The Parliament of Caudonia holds legislative power, along with the prince who may propose bills to parliament. Parliament consists of a single house called the House of Assembly, however, until May 2020, it was known as the Legislative Assembly. It also included two separate upper houses, one called the Legislative Council which was established in October 2019 and subsequently abolished later that year, and another called the Senate which was established in May 2020 and abolished in March 2022. Parliament generally has supremacy over other government institutions, although, the judiciary has some limited powers for judicial review and the prince can theoretically refuse to assent legislation. The House of Assembly is democratically elected under a system of proportional representation, and a government is formed from the political party or coalition of political parties with the majority of seats. If no majority is formed, a minority government can be formed if support from other parties during confidence votes is assured. The prince appoints ministers typically on advice of the prime minister, who is by convention the parliamentary leader of the governing party or coalition, though, he can appoint them at his discretion. The Cabinet of Ministers, formed by ministers and led by the prime minister is the highest body in government and is responsible for deciding major governmental actions and policy. Cabinet makes major decisions collectively and is therefore collectively responsible for the consequences of their decisions.

Caudonia's judiciary, headed by the chief justice, includes the High Court, Princely Court, and various subordinate local courts. Judges and judicial officers are appointed non-politically and are legally required to act independently in the course of their duties.

In 2021, the nation was ranked 12th on the Micronational Democracy Index with a score of 8.2, meaning it was a full democracy, although, according to a poll performed by the Caudonian Broadcasting Corporation, most citizens considered it to be a flawed democracy.

The following governmental departments are defunct:

Caudonia also has an official policy against micronational warfare. This makes Caudonia de-facto a neutral state. Despite this, however, Caudonia used to have negative and hostile relations with the UCSR and the United Sovereignties. This period has been called the Caudonian Crisis. These hostilities have long since been resolved.

Law and order and defence

For the purposes of local government, Caudonia was divided into regions, territories, districts, and municipalities.

There are currently three regions: Canland, New Rutland, and Olbialand.

There is currently one territory: Törland-Björnö.

The economy of Caudonia has never been properly developed.

The March 2020 census enumerated a total population of 65, an increase of around 166 percent over the first population count in July 2019.

New Rutland, the administrative division in which the capital of Caudonia was located, lies within a Humid Continental (Dfb) climate zone under the Köppen climate classification system. Because of this, the nation shares a climate with much of the Midwest and Southern Canada. These climate zones are characterized by large seasonal temperature differences, with warm to hot summers with high humidity and cold to severely cold winters. Precipitation is usually well distributed through the year. As New Rutland lacks weather monitoring equipment, the weather box below lists climate data from the nearest major weather station.


The culture of Caudonia is heavily based on that of anglophone countries, mainly the United Kingdom, Canada and the United States. 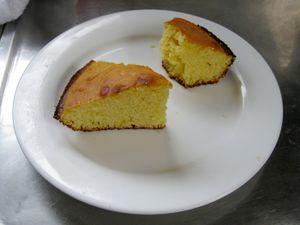 A piece of cornbread.

Caudonian cuisine has developed from various influences from around the world, most noteably the United Kingdom, Canada and the United States. Popular dishes in Caudonia include fish and chips, Sunday roast, Yorkshire pudding, poutine, butter tarts, hamburgers, and cornbread.

Also popular in Caudonia is the national drink, tea. Tea is a prominent feature of Caudonian culture and society much like in the United Kingdom. In Caudonia, like the United Kingdom, the drinking of tea is widely varied so it is quite hard to generalise. While the most common method of serving tea is with milk, it is not uncommon to drink it black or with lemon, with sugar being a popular addition to any of the above. Strong tea, served in a mug with milk and sugar, is a popular combination known as builder's tea. Tea is often accompanied with sandwiches, scones, cake and/or biscuits, with a popular British custom being dunking the biscuit into the tea.