The United Sovereignties, commonly abbreviated as the USOV in both formal and informal capacities, is an inter-micronational organisation founded on 14 October 2018 by Gabriel Sebastian. Many of its core members came from the Twitter micronational community, and congregated in October 2018 to form an organization dedicated to promoting cooperation and fair diplomacy within the micronational community. Until the turn of New Year 2019, the organisation was described by some in its membership as 'simply a social area'. The main proponent of these remarks was Daniel Morris of the Republic of New Westphalia, who was a partner in the server despite never having formally joined the organisation.

Morris and others, (particularly Grant Magic of the former Virgan Republic) advocated for change, and an election was underway for the Administrator position.

Having secured the majority of votes, Morris ascended into the Administrator role, created positions such as the Directors of different new departments, organizing the Discord server to better reflect the new professional image he had envisioned.

In early 2019, the Micronational Emergence division of USov was created, with Jay Ruz as first Director of the Emerging States Support (ESS).

On 25 July 2019, the first observer elevation took place with the approval of the proposal to elevate the Kingdom of Atlia from observer to full member.

With Dan Morris' departure from the organization, a new administration was established to secure the existence of the organization, consisting on three elected administrators who would take the lead of the United Sovereignties, being the chosen ones: Otto Gillespie Birch from Misberia, Chloe Chroris from Gaia and Joe from Liberstein. Unfortunately, Misberia left the organization, so an election for a new Administrator took place and the elected one was Luis Marcel of Atlia.

In January United Kingdoms of Misberia and Caloudonum returned to the organization and has spearheaded the Emerging States Support and with the help of Zar of Obscurium and Luis of the Kingdom of Atlia held the very first USOV meeting in months with seven delegates attending and accomplishing much needed work.

After a long 2 entire years since the destablishment, Gabriel Sebastian returned headstrong to rebuild the USOV into a new organization, one modelling itself on EU economic and political cooperation while pairing NATO-esque join defense policies. 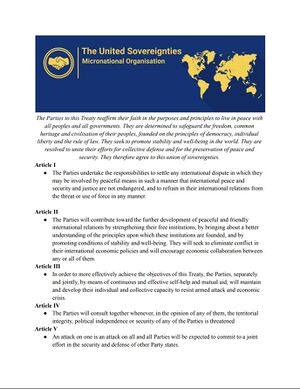 Full members within the United Sovereignties are members that enjoy all rights and duties given to a member state: they can contribute to discussions and debates, vote on proposals, elections and membership applications. Full members may appoint a representative to stand for election to any staff positions in the organisation.

Observers are micronations that observe sessions, and elections inside the organization. Observers do not have the right to vote or propose motions. Observer states are accepted in the same way that usual membership applications are made.