The Socialist Federation of Makhnovist is a micronation created on 14 September 2010, during the Atlantis Civil War, by the AnarchoCommunist National Liberation Army headed by Belfor.

During the political fight between the extreme left and the Social Democrats in the Republic of Atlantis Government, there was a point when all the patriots and comrades decided to give distrust for President Specter. The political fight soon turned on in an armed struggle, when the revolutionaries were branded as 'terrorists' and a minister declared DEFCON 5, ordering his troops to open fire on the people only to shoot down some rebels. The comrade took control of the rebel movement with the collaboration of Manuel De Felice and Gabriele Pellecchia.

He tried to avoid the fight against the loyalists for the protection of innocent lives. After an evening of negotiations, the Revolution lost two of its members, Gabriele Pellecchia and Federigo Cangelosi. After a day of the cease-fire, the rebels decided to occupy the capital of Atlantis - Poseidon - that became the capital of the new libertarian and communist state.

The newborn republic tried immediately to organise an effective defence against the first enemy - Atlantis. Sante Carbone was elected President for his valour and courage shown in the Revolution, but he would also keep control of the AnarchoCommunist NLA. However, he said that when the Republic overcame the crisis, he will immediately give all the power to the people for the creation of the anarchist society.

There are several points that the Republic will face in short times:

On 16 September 2010, President Belfor and President Specter met at the Presidential office in Poseidon. Mr showed respect for the president and also Mr S. did the same though he was a bit egoist in the transactions. So they spent the whole afternoon discussing and trying to find a solution but all they found was a first point about the political and electoral reform to At least 6 hours were spent trying to get a solution to the ongoing conflict and the end they will close to get a treaty but there was, as usual, a disagreeing on an economic reform so for the moment they proclaimed a ceasefire between the two armies.

The Proletarian and Libertarian Cultural Revolution is a campaign that has the aim of giving education to all the people as written in the Constitution. It also tries to forge a new society by giving everyone the possibility to read and get informed about any kind of historical, political etc argument. We think that the Cultural Revolution can help the Revolution of the individual man so there are artists working on posters, paints, songs that can be useful to this project. 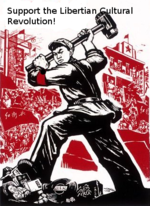 On 20 September 2010, the Socialist Autonomous Republic of Atlantis proudly announced the creation of the first international revolutionary organisation. As the founder, the Republic gets the status of Permanent Observer that means that the Republic has the right of veto and has the obligation to form the International Task Force.

Political elections of the Socialist Federation of Makhnovist

Saturday 17 October 2010 and Monday 18 October, the People of the Socialist Federation of Makhnovist is called to decide which of them will take the office of President of the Federation and of General Secretary of the People Assembly. Any citizen of the Federation can freely candidate himself to one of these offices and the electoral scheme that will be used is the direct democracy one like the Soviets and the Assembly of the AnarchoSyndicalist Catulania.