Gabriele Pellecchia (Born: Rome, 21 October 1993) is an Atlantis politician, fourth president but first president of the parliamentary republic of Atlantis, in office since October, 2010. Previously he was Minister of Foreign Affairs in Alexander Eastwood's government and deputy of the Republic from 2010. He is the fourth head of state to have been part of the Social Democratic Party.

Childhood and militancy in the SDP

Before involving himself in policy he was an important member of the administrative Council of Poseidon. Immediately sympathizer for the Social Democratic Party he joined the party where also his friend the President Alexander Eastwood was member and chairman. Gabriele Pellecchia proved active and involved in the party life. Here Alexander Eastwood discovered his talent for the international politics, because Gabriele participated at the [[w:Model_European_Communities_Project Model European Communities Project] (passing to the national session). During the militancy in the party, he met Sante Carbone that at the time was Minister of Home Affairs. In this period the most active and affluent members of the majority party were Alexander Eastwood, Carbone] and Gabriele Pellecchia.

As every citizen of the Republic of Atlantis in that period also he did the military service. He chooses to enter in the Atlantis Navy as an officer cadet, he soon distinguished for his attitude to command and military tactics knowledge. He was also promoted at the leader of Atlantis Foreign Legion since Pellecchia proposed the creation of this branch since there were a lot of non-Atleans that collaborate with the Ministry of Defence. In the same period, he became governor of Tenarunga. As a citizen of Poseidon he participates at many military exercitations. His favourite weapon is the FN P90.

The 5 September 2010 Alexander Eastwood appointed Gabriele Pellecchia as Minister of Foreign Affairs for his talent for the international politics and skills for the diplomacy. Then, in the October of the 2010 the Atlantis Civil War started and as Minister of Foreign Affairs Pellecchia participated at the negotiations with between the Republic of Atlantis and the rebels that formed the Socialist Republic of Atlantis. Pellecchia was the first that search to end the war with diplomacy but everything failed until the end with the Treaty of Empire City. He has made several alliance treaties between Atlanits and many other Micronations.

Deputy of the Republic 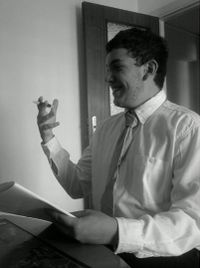 Pellecchia during the Atlantis Civil War.

Since he was one of the more important members of the SDP and since he had a fundamental role in the diplomacy in the Atlantis Civil War the party decided to ran him for the charge of President of the Republic. So, in the October 2010 he applied for the charge of Deputy. With him also many other members of the SDP apply for the charge, obtaining the majority in the Parliament the 9 October 2010. The Atlantis Post remember that as the shortest legislation of a Deputy, since 24 hours after Pellecchia was President.

Pellecchia shows himself as a follower of the socialist ideology, a firm supporter of peace as shown in the Atlantis Civil War since he was the supporter of a diplomatic end of the war, and a brave defender of equality and democracy. However, he is not afraid to criticize himself as well as his comrades. President Gabriele Pellecchia attended Classic European Lyceum, demonstrating a high attitude to subjects as languages, science, elements of law, art and geography. He also achieved in 2011 a level B2 certificate in English language for other languages speakers from the University of Cambridge. 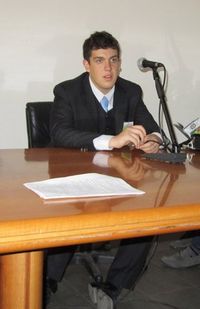 Pellecchia during an international meeting

Gabriele Pellecchia was elected president on 10 October 2010 and made a speech to the nation in which he promised to defend the democracy and the constitution. Soon after Paweł Dworzycki and Patryk Adam Bronisz posed him some questions which he answered exhaustively.

During his presidency, he led the nation, not without problems. In fact, during the summer of 2011, a group of citizens attacked Pellecchia for his "lack of character". On June 2011 he has personally coordinated the General Elections that were won by the Prime Minister Donato De Lellis. In this period he saw his party remain broadly stable, but a growth of a right-wing in the Republic. In fact, the majority in the Atlantis Parliament was of the Atlantis National Party, merged the 6 October 2011 to form the Atlantis Conservative Party.

During the Presidential Election 2011, Pellecchia supported Flavio Beninati also if he wasn't the candidate of his party. He responded so to some questions of the Atlantis Post: “I think that Beninati is very good Atlean. A good military service in the Republic, always a patriot for Atlantis and also a good politician. I just hope that since he’s not a very diplomatic person he will work on it, but since he have the sense of duty I’m sure that he’s the best choice for the presidency”.