From MicroWiki, the free micronational encyclopædia
(Redirected from Koss)
Jump to navigation Jump to search

Although its current territory has traditionally been habitated by the Portuguese people, modern Koss originated in 2010 under the banner of Republic of Smint. During this period, Koss' political power was concentrated in Brazil, where through a series of treaties and intensive pursue of diplomatic relations, became one of the biggest lusophone micronations in the world with territories spanning North America, Europe and South America.

In 2012, due to a series of internal and external conflicts, Koss experienced a decline in size and power, resulting in annexation by St.Charlie. Following the rise of nationalistic sentiment and disatisfaction with the St. Charlian government, Minister of Culture at the time and former Governor Lucas Campos seized power and broke away from St.Charlie on July 15, 2015 . Since then, Koss has taken its form as a quasi-despotic state, with the power centrally vested in the Anax.

While the etymology of the name Koss is debatable, the consensus of the origin is in the latin word cus or old papian cos meaning guardians or protectors. Many experts seem to believe Koss is a reference to the ancient guardians that fought bravely against the european invadors in the 1500s.

Nowadays, Koss has become a symbol of preservation of Kossian State value.

Koss traces its history back toa micronation known as the Republic of Smint, founded by Lucas Campos under the pseudonym of Keko Smint. Rather quickly Smint became inefficient, this often blamed on the parliamentary system. The small republic of only three citizens has often been thought of as an inefficient place to use a parliamentary system. The Republic, claiming land in Antarctica, is often remembered for its involvement in a conflict with Antarctica's Elain of Atilnia. After Campos left the community in 2011, Smint fell inactive and died.

In June 2011, after Lucas Campos' return to the community and a brief stint as the First Kossian Republic, Koss was accepted as a state in the Nemkhav Federation. During the period in Nemkhavia, the Republic suffered many changes such as its flags, its anthem, its COA as well as its customs and traditions.

The Republic was becoming a real example of a Nemkhav State. Alongside with other Nemkhav states, Koss was helping to build a democratic functioning federation, but the Republic was quickly becoming inactive. As a result of this, President Campos announced he was dissolving the current Republic and founding the Kossian Provisional Government. After a brief stint of the Grand Duchy in Nemkhavia, Koss declared independence as the 1st Grand Duchy of Koss. In modern days, the Grand Duchy is remembered as one of the founding nations of the Austral Economic Union. 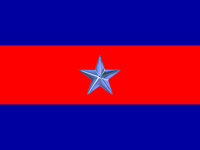 Flag of St.Charlie, which Koss was a Federation of for 2 years.

Several short-lived Kossian governments flew by in the time following the Grand Duchy, coming to a head in the Kossian Civil War. A new Grand Duchy was founded with much excitement, however inactivity quickly plagued the fledgling successor. In an attempt to increase activity, Campos made Koss join the Federal Republic of St.Charlie.

Since Koss declared independence from St.Charlie, it has formed a new government referred to as the State of Koss. Led by Anax Lucas Campos, Koss began a radical simplification of it's government. Following Kossian secession, Campos once again got involved in the MicroWiki community. Upon the organization's revival, Koss became a member of the Grand Unified Micronational. Upon Koss becoming a member of the GUM, the nation saw a significant increase in influence on the community.

In June 2016, Henry Twain was appointed Minister of Commerce by Campos, and soon after became the Prince of the Kossian Principality of Valites. In July 2016, Steve Freayth designed a new coat of arms to replace the old St.Charlian one. With a law passed by the Anax, the coat of arms was adopted on July 21, 2016

Koss is an absolute monarchy. No political parties are permitted. In the absence of elections and political parties, the Office of the Anax combines legislative, executive and judicial functions. The Anax is also the Chairman of the Royal Council, the advisory body of the realm. Koss has been characterized many times as a benelovent dictatorship due to the nature of rule of the Anax.

Due to the low number of natural Kossian citizens, high ranking posts are either controlled through the Office of the Anax or given to outter Kossians. This allows activity to spread and encourages citizenship requests.