The Republic of Koss was founded as a direct successor of the Republic of Smint, but it soon realized that just as its predecessor it could not survive alone. In order to prevent inactivity to take over the nation, the President of the Republic, Lucas Campos decided, on April 27, to resign in favor of Isabela Mello who kindly appointed her precessedor to the position of the Secretary of State. As the Republic could not sustain itself, it joined Nemkhavia on June 5.

The Republic of Koss adopted an untested type of government, which was based on a thesis written by Aaron Wildavsky on the Cold war. The thesis was called Dual Presidency Theory. Koss was a dual presidential republic. The following is a list of officials:

Nations that signed a Treaty with the Republic of Koss

The Republic of Koss had a very restrict policy regarding crimes. Crimes related to alchol went to the Tribunal of the Republic and can serve to 2–9 years jailtime. Crimes related to murder and homicide must go to the House of Crimes where the criminal may serve 1–8 years in jail. The National Police of Koss was one of the effecient polices in the continent, the Police has a zero-tolerance policy instructed for alcohol and murder. They could also open fire if the criminal open fire first. 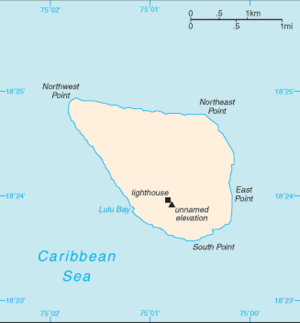 The political map of the island of Navassa, the main claim of the Republic of Koss.