Smint became a MUSC and OAM member, but had some complications with the ASEA which were quickly resolve. President Smint made a pledge to do everything in his nation's power to prevent war and prevent problems with other nations when he revived Smint, a policy that would be later created by Marka Mejakhansk called Policy of Peaceful Existence.

Smint was a presidential republic. The President was the head of state and government, and had a Council of Ministers who acted as advisers. Smint also had a National Assembly that discussed matters of state but could be opened or closed by order of the president. Smint in many aspects resembled an absolute monarchy.

The Republic of Smint was quite a friendly nation, having signed treaties with a number of different micornations. 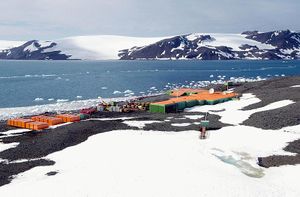 Naval City, capital of the Republic of Smint.

The Republic of Smint was very cold, especially in the winter, except for its claim on Saint Helena Island in the South Atlantic.