The Kossian Empire (in Portuguese: Império Kossiano), sometimes referred to as the Realm of Koss, was an Austral micronation distributed in the cities of Brasilia, Brazil, and Jakarta, Indonesia. It was a semi-constitutional monarchic union between the crowns of the Grand Duchy of Koss and the Principality of Jaankecil, of which Lucas Campos was the monarch.

The two micronations, at that time knew as Republic of Koss and Republic of Berin, first began contact, when both joined the Nemkhav Federation in 2011. Leaders of the two states soon began to interact and became very close friends. On September the head of Berin, Tarek Kârjasary informed the Nemkhav Government that due to Nemkhavia entering the GUM and the upcoming elections, the berinese people were seeing a downfall in the benefits in remaining a Nemkhav State. Some days later Berin secceed under the name of Faryar, leaving tensions between the Federation, more specifically Koss, and the new nation. A motion to condemn Berin, written by Lucas Campos, was introduced in the Nemkhav Federal Assembly, but it did not follow through, being the issue forgotten with time.

On November 13, the Republic of Koss was reformed into a monarchy, and the state saw a tremendous boost on its level of internal activity. Later on December, due to a major internal issue,[1] the Kingdom of Pristinia left and the Grand Duke began to think if Nemkhavia was really the best thing for Koss. After discussing the proposal with some experienced micronationalists, Campos decided to secede from the Nemkhav Federation.

After the disaster the nation-project Faryar was, the word that the nation would be dissolved were getting public. The idea of forming a new state under the name Trinitagua was accepted by the legislature, but a proposal of Tianan president Joseph Puglisi appeared. The proposal included the transformation of Trinitagua into a Special Administrative Region of the People's Republic of Tiana. The transition was suppose to take place on February 26. Meanwhile in Koss, Sakasaria became a SAR, being a target of criticism for "copying" the Tianan-Trinitaguan model. The negotiations between the Trinitaguan Prime Minister Tarek Kârjasary and the Tianan President Joseph Puglisi continued, until some internal problems began within the Trinitaguan state, one of those problems was the popular dislike for the name Trinitagua, the Council then approved the name Montriac. Although the idea was largely endorsed by the Prime Minister, the population didn't like the idea of being a "sub-unit" of a independent state. The legislature voted to form a independent country, the new country was going to be called: Principality of Montriac

The Grand Duke Lucas Campos soon heard the idea of a new state being formed and entered in contact with the Minister of Foreign Affairs. In the discussion, the Monarch said he was in support of the idea of a new sovereign state being formed. Days later, the Minister of Foreign Affairs entered in contact with the Grand Duke to inform him that the Principality was declaring independence on February 16, instead of February 28. On February 27, the Grand Duke approached Kârjasary with the proposal of creating a new micronation, similar to the Austria-Hungary. The idea was not supported by the Minister, but it was presented to the Princely Cabinet and received 3 out of 4 votes in favor. On March 2, the Kossian Empire was created.

The letter was hardly criticized by Kârjasary, who refused to accept the stipulated conditions and decided to seek for external support. After a few days, the President of the new Republic, Isadora Annenak, accepted the Kossian terms. Leading Kârjasary to declare independence from Montriac, under his new nation-project, Czea.

With the the sudden leave of Montriac, many began to inquiry as to whether the Empire would be dismantled. Even after the release of an article in the Kossian Gazette,[2] the future of the Empire was uncertain, the People and the Royal Council were fearing for the end of the Realm. On March 28, the Principality of Jaankecil joined the Empire, extinguinshing any doubts about the continuity of the Monarchy.

With the the sudden leave of Montriac, many began to inquiry as to whether the Empire would be dismantled. Even after the release of an article in the Kossian Gazette,[3] the future of the Empire was uncertain, the People and the Royal Council were fearing for the end of the Realm. On March 28, the Principality of Jaankecil joined the Empire, extinguinshing any doubts about the continuity of the Monarchy. A week after the Principality was accepted in the Realm, the Prime Minister of Jaankecil, Yury Zozulya informed the central government about a rebellion that was happening in the princedom. The Prime Minister informed that the lack of support by the population for a non-communist state was huge, soon, Leader of the opposition, Syam, entered in contact with the Kossian Emperor and explained that Jaankecil would be either conquered by force or by the Koss ceding the land, after talks between the Monarch and the Prime Minister, it was decided that Jaankecil would be a free country once again.

An article[4] published in the Kossian Gazette authored by the Grand Duke of Koss was released on April 12, explaining what would happen now that Jaankecil was gone. It was decided by the Estates of the Realm that the Empire should be dismantled, the 2nd Grand Duchy of Koss would take its place as the only successor on April 18. 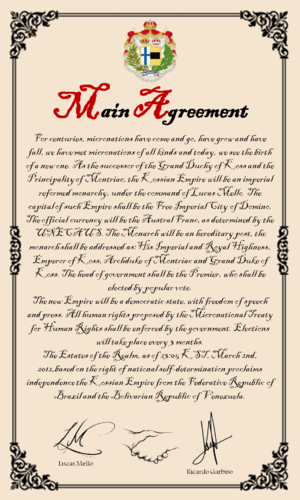 Agreement of the Union

The Empire was a reformed monarchy, in which the power was shared by the legislature and the monarch.

For the Judiciary power, the Empire counted with the Supreme Court of Justice, which was in charge on interpretating the law at a federal level. Constituent nations were allowed to have their own state tribunals.

The Executive branch of Koss, was vested by the Premier and the Emperor, jointly. The Emperor of Koss was the head of state and had the power to dissolve parliament, appoint ministers, declare war and veto laws, he was also responsible for taking care of Foreign Affairs, representing the Empire in organizations and bilateral meetings, and he was also in charge of signing treaties. The Premier was the head of government, he took care of the administration of the Empire, making sure the law was enforced.

The Foreign Affairs of the Empire were handed by His Imperial and Royal Highness the Emperor, being also advised by the Premier. The following micronations were recognized by the Empire: 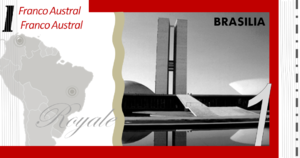 Although very basic, the economy of the Empire seemed promising. It was in the government's hope to establish a stable and secure source of income and to have no debts. The main source of income of the government was the secondary sector, in which the governments produced and sold, but, this was hoped to be changed, as more and more enterprises were being founded within the nation.

The Empire was a founding member of the UNECAUS, implied that it uses the Austral Franc, a currency shared by all of its member-states. The Royale was in charge of printing the Franc throught the Empire and within all member-states of the Union.

The Kossian Empire, due to its constituent nations, was a very diverse place.

In the Grand Duchy, a very common dishe was the croissant, the pain du chocolat and the natural orange juice. It was traditionally served in breakfast. This dishe was due to the heavy french influence in the Grand Duchy. A common dessert was the brigadeiro, made from condensed milk and chocolate powder. A very traditional lunch consisted of rice, beans and the picanha, generally served undercooked.

The Empire had the Kossian Gazette, which was the main source of news for the kossian population. The Kossian Gazette was government-owned and it was going through a reform, in which, its goal was to cover things as elections and major events not only from Koss, but from other micronations, as well.