Isadora of Sabia and Verona

In this traditional Sabian name, Isadoravái is the matronymic and Annenak Itešar is the family name.

A member of the House of Annenak, a lineage of Valtirian electors, Isadora briefly served as Governor of Sabia and Verona in 2013, during the era of Juclandian rule. When Sabia and Verona became an independent nation and its crown was separated from that of Juclandia, Isadora was elected by the Federal Citizenry to succeed King Ciprian of Juclandia as the nation's head of state.

On 23 August 2015 Isadora signed an instrument of abdication, ending her year-and-a-half reign, the longest rule of any head of state in the Valtir Sector up until that point. She was succeded by Tarik of Karjasari. The era of her reign is known as the Isadoran era. 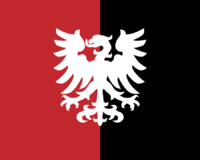 Flag of the Republic of Montriac. 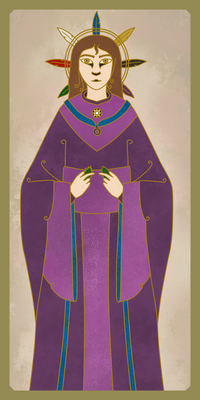 Tencoxu-style portrait of Queen Isadora as High Priestess of the Pahun, painted after her abdication. She was known in the Church as Alyna, and was given the nanasehur of Ashthagooshrithu.

Annenak's micronational career began with her appointment as Vicereine of The Faryar, representing the Zealandian crown of Queen Astrid. In late 2011 and early 2012, The Faryar became inactive and finally dissolved in February 2012, becoming the Principality of Montriac. The principality remained sovereign for a few days before merging with the Grand Duchy of Koss, forming the Kossian Empire, in which Annenak became an important figure. The rise of an anti-Kossian sentiment in Montriac eventually led to the Kossian Civil War, in which she became involved as a leader of the "rebels" who formed the Republic of Montriac, a state unrecognized by the Kossian crown and much of the MicroWiki Community. She was declared President of the rebel republic, though in practice it was Tarik Kârjasary, former Archduke of Montriac, who led the republic and the rebels. Her presidency ended when, after a truce was signed between Koss and Montriac, the Republic became part of the Federal Union of Cizland.

She became a citizen of Artaghe in 2012, where she was a minor figure in the nation's politics. The decline of Artaghe and the creation of the Artaghean Principality marked the beginning of a hiatus in her political career. She became a citizen of Sabia and Verona when the region was declared an overseas territory of Juclandia in October 2012. This time, with a more stable government, the future Queen began her political activities again.

She became Governor of Sabia and Verona in recommendation of former officeholder Tarik Kârjasary, who had previously introduced her to micronationalism when he led The Faryar as the defunct nation's Prime Minister.[1] Aided by her diverse political record, she was approved by King Ciprian and sworn into office on 22 April 2013. Her term as Governor was mostly uneventful, but marred by the failed 25 July coup d'état attempt led by Napoléon Bleuberrie, in which she was unavailable to act due to personal circumstances.[2] At the end of her six-month term she was succeeded by Kârjasary, who became Governor for a second term.

In 2014, the Kingdom of Juclandia and its overseas territories became the Federal Union of Juclandian Lands, and Sabia and Verona was given the opportunity to become a monarchy on its own - as opposed to having the King of Juclandia reigning in Sabia and Verona, to which both the Legislative Courts and the Federal Citizenry agreed to.[3] She was elected as Queen following a small referendum among the federal citizenry (the human citizens of Sabia and Verona), and her name was the first inscribed in the Book of Electors. For her coronation, a simple three-item regalia was commissioned, consisting of a Crown, a Sceptre and a Royal Orb. The coronation however, scheduled due 23 February 2014, was postponed in sight of the crisis affecting the region at the time.[4][5] In April 2014, the crisis still ongoing, Isadora released a statement asking President Nicolás Maduro to comply with the Venezuelan people's requests and needs in order to let Sabia and Verona conduct its affairs in peace. That same month she ratified the new Constitution of Sabia and Verona. She was finally crowned in a small ceremony held in the town of Ejido on 27 April 2014. Her coronation was witnessed by Kârjasary and Aina Oehler.

In early October 2014 Isadora oversaw the Aishayerovê and led Sabia and Verona through its transition into the new set of reforms Prime Minister Bertrand Rivière was implementing. Among the reforms, her title was changed to "Queen of the Valtirians", which was considered simpler and more inclusive than "Queen of All Sabia, Verona and Lycem". She was also declared High Priestess of the Pahun with the nationalization of the Pahunist Church.[6] Since the establishment of the Sabioveronese peerage, Isadora holds the title of "Duchess of Zafir". She also introduced a number of spelling reforms in the Sabian language (then known as the Sabian language, nowadays known as Old Sabian); these were henceforth known as the "Royal Reforms".[7]

As the economic and social situation in Venezuela worsened, Sabia and Verona suffered the side effects of being enclaved and almost entirely dependent on the South American country. In mid-2015, the Haronos Plan was devised as a result of this. Haronos was presented as an initiative to allow Sabioveronese provincial citizens to emigrate to Argentina to form a community outside the Valtir. Fearing for the state in which the Kingdom would be left once the plan was executed, Prime Minister Bertrand Rivière summoned the Sabioveronese people to a public meeting of important political leaders of the region, though Isadora was not among those invited. The congress was held on 16 August in Salisse, which gave it the name of "Congress in Salisse". Two main objectives were set for the congress: deciding what the fate of the Sabioveronese state would be and and writing a new constitution if needed. It was decided a new constitution would be written and it would be adopted if the new settlement was to become a Sabioveronese territory. The new constitution, written from August 15 to August 20, was initially known as the "Just-in-case Constitution".[8]

On 17 August, the day after the Congress of Salisse was held, Isadora signed an Instrument of Abdication (Érianos Metavrosann) which was to come into effect on 23 August 2015, on the 18 month anniversary of her reign. The Instrument was signed in face of the complications of having the ruling monarch live 4800 miles away from the country's administrative centre, one of the reasons Isadora was crowned in the first place: to replace King Ciprian who had ruled from Juclandia.[9] Rivière, as the leader of all of Sabia and Verona at the time in his capacity as Prime Minister (the office of Governor of Sabia and Verona and the Legislative Courts dissolved since late July), had the option of upholding Isadora's abdication or disregarding it if the settlement created by Haronos turned out to become a new independent state.

In the end, Rivière upheld Isadora's Instrument of Abdication, and on 23 August, Tarik Kârjasary was crowned the new King of the Valtirians by lack of any other suitable electors. On 25 August, Haronos I was executed, and as it had been foreseen, Kapakoxouky was carried out. The newly founded city of Alios became the new capital of Sabia and Verona, and the "Just-in-case" constitution became the new official constitution of Sabia and Verona.

Isadora, featured on the 20 groxar bill.

During the Tarekian era, which followed Isadora's Isadoran era, the figure of the former Queen has been glorified and upheld as a symbol of Sabia and Verona's monarchy and history.[10] After her abdication, she has been honored by having a street in Alios (rai isadora) and a university (the Isadoran University of Darmosari) named after her.[11] In 2016 Isadora's portrait appeared on the 20 groxar banknote.[12]

One of the two companies of the Sabioveronese National Guard, the 1st Company "Rai Isadora", bears her name.

She lives with her mother's family alongside her brother and a number of relatives. Although raised Roman Catholic, she identifies as Deist. She does however usually attend mass at the church of El Llano Parish, where the seat of the Annenak family stands. She has close friendships with Tarik Kârjasary and Aina Oehler; both were present at her coronation. The Queen is a Girl Scout. She plays the piano and the violin. The Queen is an enthusiast of the Harry Potter and The Chronicles of Narnia series, as well as the American TV series How I Met Your Mother, Friends, Helix and the British TV series Skins. She identifies as a feminist and an ecologist, and supports green politics and animal rights.

Strictly speaking, as Isadora holds the peerage dukedom of Zafir, she is properly addressed as Her Grace and may be given the treatment of olann. However, in most contexts she is referred to as the Queen emerita, and is still given the treatment of "Her Royal Highness" (raiolann), as she was styled during her reign. The name "Isadora of Sabia and Verona" (isadora sabiann i veronann) would be only used in foreign contexts, while domestically she was simply referred to as "Isadora Annenak" when her titles and style were not in use. In the Church of the Pahun she is officially known as Alyna, but this name is rarely used outside the religious institution. Alongside her peerage title of Duchess, Isadora also holds the honorary title of "Protector of the North".[13][14]