MicroWiki:List of users by edit count 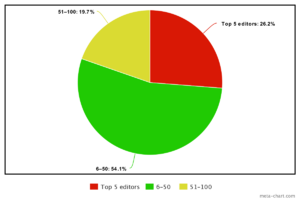 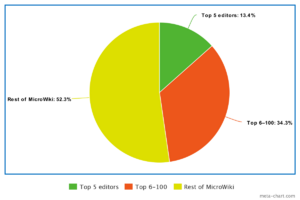 An edit count is a number stored for each user counting the total times they have saved a change or changes to a page on MicroWiki. MicroWiki, which has run on MediaWiki since 7 November 2013, counts edits in all namespaces (articles, talk pages, user pages, user talk, templates, files, etc.), however some types of edits that may be included in certain page count tools, such as page moves,[a] are not captured by the counting method employed to compile this list. The simplest method to view a user's edit count is via Special:Preferences, which includes deleted edits.[b] The MediaWiki extension Special:Editcount gives a more detailed view of the namespaces edited by a user, however it excludes deleted edits.[c] Nevertheless, typing {{Special:Editcount/User}} will display a user's live edit count on any page; this will also include deleted edits. The server counts each edit – regardless of whether it reflects a single change to a page or many – as 1; this is what the server does when generating the efficient counts shown in Special:Preferences and in Special:Editcount, the latter of which gathers its data directly from the server.

When MediaWiki was installed on 7 November 2013, all prior edit counts and page histories were erased – the entirety of edits made on microwiki.org.uk (7 November 2010–7 November 2013), which itself did not include edits made on MicroWiki's original website hosted on Wikia (now Fandom), which was registered on 27 May 2005. As such, for user accounts registered on MicroWiki prior to the installation of MediaWiki there is a significant disparity between the edit counts counted on the aforementioned methods and their actual edit counts on MicroWiki. In order to attempt limit this discrepancy, the below list includes the edit counts of users on the former Wikia website – the edit counts of whom are still publicly viewable on MicroNations Fandom[d] – and an estimated edit count on microwiki.org.uk, the number of which has been estimated based on various calculation methods, such as known edit counts (typically via snapshots on the Wayback Machine; testimonials are not considered reliable) and guesses based on calculations from the known average daily edit counts of users with registered accounts on both Wikia and the current MicroWiki.

The first edit on MicroWiki was made on 27 May 2005 at 15:14 (UTC) by Fabian Schneider (Monsterfurby), the founder of MicroWiki. Thus, Schneider held the highest edit count on the wiki. In late October 2005, Perry, chancellor of Arlberg, claimed the title upon reaching 23 edits; in c. May 2006, Jeffrey II, Prince of Satirocity, overtook Perry upon reaching ~100 edits.[e] Cesidio Tallini (IndigoGenius) overtook Jeffrey II somewhere in 2007 with over 509 edits, followed by Robert Lethler (Ptrcancer) in c. 2009 with over 1,000. It is probable that Alexander Reinhardt (Cajak) was the last user to hold the highest edit count on Wikia, after he reached over 2,000 in c. late 2009 to c. early 2010. Aldrich Lucas, editing on microwiki.org.uk, reached the highest edit count "well before 26 February 2011" upon reaching between ~5–6,000 edits or more. By the time Lucas retired from editing in February 2012, he had made 28,632 edits to the wiki, well over that of any other user. His edit count would not be overtaken until 30 May 2020, when Zed (ZabëlleNB) achieved a larger amount. Since the installation of MediaWiki software, which reset all edit counts to zero, six individuals have held the top spot for most edits on the site: Ciprian (Cip), Jonathan I of Austenasia (Austenasia), Ned Gunderson (Mikejones; formerly Nedland), Tarik Karjasari (Ricky), John I of Baustralia (KingdomOfBaustralia) and the current holder Zed (ZabëlleNB; formerly Z Luna Skye). With 50,335 edits as of 26 May 2022, the user has held this distinction since 7 November 2019.

Relationship between edit count and skill

Edit counts are a crude and inaccurate measure of determining an editor's skill or worth ("Quality over quantity"). There are many reasons why a total number of edits usually does not indicate quality of work, quality of an editor, or the significance of contributions to the wiki. Many editors who are high on the list perform routine tasks that require less time per edit such as fixing typos, maintaining templates, adding ambox templates, updating and maintaining lists, reverting vandalism or creating redirects; conversely, users who create a number of long new pages or make major additions might easily spend a week or more undertaking research before editing, and appear much lower on the list, if at all. Additionally, some editors use the 'Show Preview' button until they are satisfied with a particular (possibly very long) edit, while others will habitually save a succession of small changes as they go. Lastly, some editors may excessively edit pages in the user namespace, especially their own userpages (also called sandboxes) when making test edits. 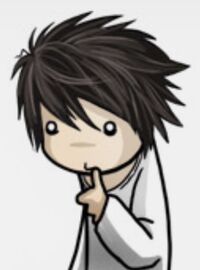 Aldrich Lucas (depicted) held the highest edit count on the wiki for at least three years,[l] and was the first user to reach 10,000 and 20,000 edits.

Ned Gunderson (Nedland; now Mikejones) was the first user to reach 10,000 edits on MediaWiki, and held the highest edit count (on MediaWiki) for nearly three years.

Milestones and most edits per year 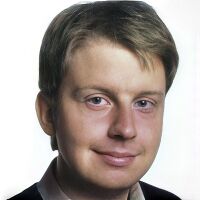 Fabian Schneider (Monsterfurby), the founder of MicroWiki, made the first edit on 27 May 2005.[3] 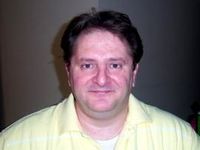 Cesidio Tallini (IndigoGenius) was the first user to make a thousand edits, doing so in 2008.

Most edits per year