From MicroWiki, the free micronational encyclopædia
(Redirected from Main page)
Jump to navigation Jump to search

MicroWiki is the largest online encyclopædia about micronations, small and often rather eccentric nations that are unrecognised by the wider international community. The wiki is being continually improved and updated by 61,715 editors, with content being moderated by a small group of staff and funded by our generous Patrons. Since its creation on 27 May 2005, the site has grown to become the largest micronation-related website on the Internet, with a total of 193,118 pages and 36,429 articles, of which 110 have achieved good article status. Before you start editing, it is recommended that you take a look at our content disclaimer, basic rules of editing, and the nation page guide.

A micronation is, broadly speaking, any self-proclaimed sovereign state without international recognition that is treated differently to a state with limited recognition. There is no widely accepted consensus on the definition of a micronation within the field of micropatriology. Geographically, most micronations are very small, are often the outgrowth of a single individual, rely on their sovereign state (macronation) to some extent, and mimic nation-states by proclaiming national symbols—such as a flag—and issuing coins, banknotes or passports. Micronations can be founded for a variety of reasons, including discontent with one's country, personal entertainment, theoretical experimentation, protest, artistic expression, satire, tourism and the conduct of criminal activity. Most micronational claims are considered trivial enough to be ignored by the sovereign states whose territory they claim. (more...). 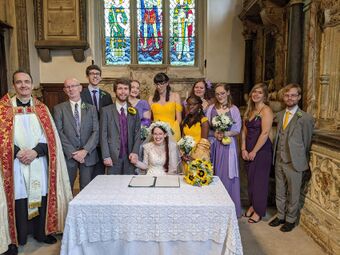 Taken at St. Mary's Church in Beddington, 5 November 2022, at the Anglican wedding service of Emperor Jonathan I and Princess Hannah, in the chapel during the signing of the register. L-R: Fr. Andrew Fenby, HIH Emperor Father Terry, Lord Timothy Boxall, HIM Emperor Jonathan I, the maid of honour, HI&SH Princess Hannah, other bridesmaids, HIH Crown Princess Caroline, HIM Emperor Adam I.

This month in history

The 2023 Saspearian General Election began on January 27 and ended at midnight Unueco Time on January 29, which saw a turnout of 71% (10/14), an increase of 31 points from the turnout of 40% (6/15) in the 2021 General Election, and the highest turnout in an election in Saspearian history. All six seats in parliament were up for election. The election was one seat short of having candidates, which is one seat in the province of Logejo, which is scheduled to be filled in through a special election or an appointment soon, according to Emperor Anthony I. The last general election for parliament was held two years ago, in January 2021, which had three seats up for election...

Dracul, Cycoldia, and other nearby micronations in Houston are currently searching for damage after a tornado was confirmed by the US National Weather Service. Dracul and others are reporting no injuries and...

It was ten years ago today – 20 January 2013 – that His Imperial Majesty Emperor Jonathan I ascended to the Austenasian Throne. To mark this momentous occasion, today’s Imperial Ascension Day – an annual public holiday – has been declared the start of a Decennalia year, during which various celebratory events will take place...

The Basileia of the Romans is in mourning following the death of the last King of the Hellenes, Constantine II. He was the last monarch of the Greek royal family and the last King of Greece. He passed away at the age of 82 this past Tuesday...

The Micro Improvement podcast is set to return this Friday evening, with Host Stephen Luke and Molossia’s President Kevin Baugh discussing, “How to not take yourself so seriously” for micronationalists...

The 2023 year brings massive changes for Dracul; changes that the Commonwealth and many in the country have never seen. Many within the nation, as well as the community have their eyes glued on the developments...

On the 3rd of January, 2023, Australis returned to the greater micronational community - With some changes. The Grand Duchy is no more - The nation is now known as the Second Commonwealth of Australis, and its leader, Daniel Hamilton, is now the President of Australis. In this article...