From MicroWiki, the free micronational encyclopædia
(Redirected from MicroNations Fandom)
Jump to navigation Jump to search

MicroWikia is the name usually given to the wiki hosted by Wikia at micronations.wikia from 2012 to 2018, when it claimed to be the "true MicroWiki" and used the name of the more well-known site. The website was the original hub of the MicroWiki nations from May 2005 until November 2010, when MicroWiki moved to a private server. Beginning in April 2012, a break-away group from MicroWiki established itself on MicroWikia, claiming to be the "true" community due to its use of the original website.

On 31 October 2018, Jonathan I of Austenasia persuaded the community to officially change its name to MicroNations Fandom, formally renouncing its claim to be the "true MicroWiki". Both the MicroNations Fandom and the "original" usage of the site from 2005 to 2010 are generally dealt with separately to "MicroWikia", which generally refers only to the schismatic revival of the site between 2012 and 2018.

Migration of the MicroWiki Community

Following a design change and the company's refusal to listen to its administrators, a large group of wikis left the site for other alternatives. The MicroWiki community, through discussions on the MicroWiki Community portal[1] and the OAM forums, moved their articles to an independent website, hosted by Pierre d'Égtavie and sold to Emperor Jonathan I in May 2014.

Following the community's abandonment of the original MicroWikia, intending to leave it as an archive, the staff of Wikia appointed Kyng Fyrst as a new administrator. This act of undemocratically appointing an administrator and rejecting the community's wishes led to a dispute between Fyrst and the rest of the community, many of whom requested their articles on the old site be deleted. The dispute eventually ended with the rejection of Kyng Fyrst from the community and ultimately the Dissolution of the Slinky Empyre. However, some members of the community note that had Kyng Fyrst not requested adminship, some other - possibly random - person would have stumbled upon and subsequently been able to "adopt" the Wiki according to Wikia's policy.

Revival of the Wikia site 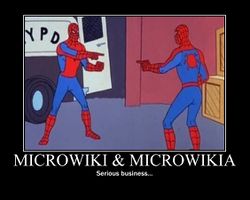 Despite lasting divisions in culture, with regards to purpose the two Wikis are fundamentally the same.

In April 2012, Harry Fitzpatrick attempted to restore the largely dormant website for the use of Monovia and a few other closely-linked micronations. However, due to the influence of other individuals - most notably Harshvardhan of Aryavart - the aim was extended to the revival of the Wikia site as an alternative to MicroWiki. Harshvardhan and Fitzpatrick became bureaucrats of the wiki, after which Harshvardhan claimed to run MicroWikia through a form of revolutionary council called the "MicroWiki Republican Army".

Unsuccessful attempts by members of the MicroWiki community to help the users of MicroWikia set up a functioning administration while preserving the archived articles of the original community took place until the start of 2013, failing due to interference from Harshvardhan, who encouraged animosity between the two userbases. The members of the MicroWikia community at this time became regarded as extremely immature and unprofessional, and representatives of the Wikia corporation itself had to intervene several times in response to disputes over administrators.

In both December 2012[2] and July 2013 large proportions of the members of the MicroWikia community called for the community to move to MicroWiki, but no total migrations took place such as that of November 2010.

By the start of 2014, the majority of articles written by the original MicroWiki community had been deleted from MicroWikia, erasing much of the common heritage of the two websites. A small community continued to use MicroWikia, claiming to be the "true MicroWiki" due to their use of the original domain name, until 31 October 2018, when through the efforts of Jonathan I MicroWikia changed its official name from "MicroWiki" to "MicroNations Fandom".