Shady Morsi is a Dutch entepeneur, perennial candidate, and journalist, who has participated and held office in numerous micronations including Viadalvia, Hoogwaard, Campinia, Konraq, Kökqoyunlu and Hasanistan. Morsi identifies as a centre-left economic but right wing social views... Morsi was born and raised in Zoetermeer, Netherlands and attended MBO Rijnland before forming his own company. SonPa Tech Trade,

Morsi was born on Febuary 9, 1999, at Het LangeLand Ziekenhuis Zoetermeer, and named Shady-Yusuf Hosam El-Deen Mohammed Habdamina Morsi He was the son of Hosam Morsi. (1962–), and Azza Dakhil (1963-).His parents had been married on 29 January 1995, Morsi began his formal education at the Keerkering in Zoetermeer at age 5 Beginning in 2005, he attended the Leo Kannerschool SO in Oegstgesst, Soon he comes to Hazenboslaan School where he held a number of leadership positions including secretary of the student council, a member of the editorial board of the school newspaper, and captain of the soccer team, At age 9 he had a interest in everything including religions, capital cities, countries, and cultures making him more inteligent than his contemporaries. He had to ride a school bus for an hour each way during his freshman year and he received excellent grades. He played soccer, basketball and hockey and various other sports,

Shady discoverd micronationalism after reading about Sealand and Molossia In 2010. Shady Morsi and Stein Dros discoverd an abandoned bulding near his school He and Dros decided to proclaim the Republic of Shadystein. Soon the republic was transformed as a monarchy and renamed as Shady was proclaimed King after an election and Timo Vink was proclaimed as Prime Minister

As soon Morsi (then known as Shady Restapato) founded the Republic of Hoogwaard it was known as a liberal dictatorship Hoogwaard had its roots in the Eurozone crisis. The Patriotic Front, proclaimed the inderpendence of Hoogwaard led by Shady Restapato, The republic was declared within its capital Hengelveld,The nation joined the now-defunct Micronational Union and became member of the Federated Coalition of Nations,It had its own court, police, prison, currency (Hoogwaardian Gulder), and an army of 5 men.Despite this sucesses the republic colided durring the Hoogwaardian Civil War and a lack of reputation

After Hoogwaard was isolated. The government was unpopular and Hoogwaard became a monarchy for 31 minutes with King Andrew I, However later deposed in a coup He left and Hoogwaard become a democratic republic However on 31 May,The Socialisr Peoples Army is founded and tried to attack the proconsul but failed. On May 14 A civil war begon Jordy Sloos start a revolt and try to conquer the capital of Hoogwaard but failed and a long range civil War started, On 23 May, Hoogwaard vandalized Montanian and Molarussian pages, Montania dont respond but Molarus declared war, That marked the begin of the Hoogwaardian-Molarussian War However, 5 days later a peace treaty On 7 July The civil war was ended. The republicans won but Morsi decided to dissolve Hoogwaard

However Morsi seems to be instable as The Viadalvian Civil War was fought from 21 September to 22 December 2013 between the Federalists, who were loyal to President Morsi and the Federal Republic of Viadalvia, The Nationalists, a fascist rebel group led by General Dave Visser, and the Socialists with lead by Tim van Leeuwen. The war began after a new constitution by the government to form Viadalvia intro a Federation. The Nationalists and the Socialists declared independenc The Federalists was supported by parts of Pathalla South Alenkandar and Hasanistan. However, rebelling units in important cities—such as Voltak, Lajos Timograd, and Hengelveld, The Socialists surrendered on 22 December. However the Viadalvian government fights against Nationalist Holdouts until 4 January. After the Viadalvian Civil war, Viadalvia declared neutrality and The Viadalvian golden age was begun. Viadalvia become less militarist and Viadalvia build their civil affairs. Viadalvia was also more serious, and the government abolished conscription. The Second elections were held, and Shady Morsi won with 88% of the votes. Soon a new conflict, the Viadalvian-Pan Iryllian conflict, arose between Tarlov, Viadalvia, and a separatist movement called Pan-Iryillia. Due the fact Viadalvia and Tarlov are allies, Viadalvia declared war on Pan-Iryillia. When Viadalvia withdrew from the war, Pan-Iryllia won, After 2 months another conflict escalated to war, known as the Oegstgeest War. Viadalvia won and made Arnham into a puppet state. In 2014, Morsi resigned due depression and Timo Vink was elected as president

Around 2015, Brändholm ( a nation who was founded in 2009) was re-established and a socialist government was instaled transformed into the Socialist People's Democratic Republic of Brändholm. with was established by Sam Bakker Shady Morsi and Wessel de Wekker during this era, having a marxist-leninist ideology However more people joined the Republic and demanded democratisation to avoid a civil war Sam started The Democratisation of Brändholm making Brändholm a Direct Parliamentary Democracy and Shady was elected as president On 24 January the Government of Brändholm decided to annex the remnants of Serdesia a former micronation with has been transformed into an extraterritorial enclave, On 29 January The republic started to claim Yttre Julholmskläppen In the last time of the republic. Various disputes and disagreements within the government and parties with separate from other party. Also due a lack of some citizens the republic collapsed Julholm declared independence from Brandholm the remnants of the republic formed the State of Brändholm considers of Brandholm island however on the 9th of March. The Republic of Julholm proclaimed the merger with Brandholm On 2015 the government returned to the old system, The confederacy is aboslished as on 2 june Brandholm started the Kunnia War After the war the YOG dispute begon and the Prince returned to the country. constitutional referendumwas held in Brandholm on 26 June 2015 a key event of Brandholmerhistoryruled by various presidents Soon with 76% of the votes the monarchy is re established The Republic of Brandholm was re-declared on 11 June 2016 as an independent state as result of the 2016 Brandholmer Independence Referendum. 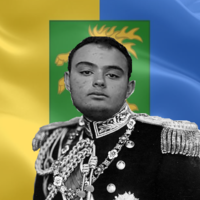 Alternate Portrait of Morsi by The Baron of Tradthar-i-falur

Shady Morsi became citizen of Campinia and proclaimed himself Duke as a misunderstanding. Elias offered Morsi the position of head of government; the latter mistakenly interpreted this as an abdication, which he then publicised. Elias I reigns as Duke, with Shady Morsi as Grand Constable of Campinia, Morsi was officaly inaugurated as Grand Constable on September 11, 2016, sworn in by Elias, Morsi presided over a period of economic and national prosperity. Months into his first term, he signed the Campinian Civil Code, which formed the civil code, On Christmas eve 2016, Morsi was raised to the rank of Graaf (Count). He was also promoted to the rank of General, and He also continued to serve as Campinia's foreign minister. Because of the non-involvment of the monarchy he held, Morsi has near complete control over domestic and foreign policy.

Morsi was proclaimed as King of the Vroopans by Jan Kees Hendrik I, Morsi was inaugurated (Vroopans kings where never crowned) on 10 March 2017, Under his regin Vroopa joined the MVFF altough Vroopa never played a match against another micronation. The title was seen more as an honary title and not as a title of a nation. Vroopa was seen more as a tribe than an independent sovereign nation

Morsi attempted to reform the nation was in the begining halted by conservative elements lead by Kees Hendrik I, most of it was blocked.. in this time Wallenian monarchs neer use their macronational name as a nation and since Shady's original birth name was Yusuf he angelised his regin name to Joseph

Under Wallenias founding document, the King is the head of state with full executive authority, including emergency powers .Moreover, according to Wallenian citizens Joseph has "a strong personality" that allowed him to "rule with a conscience" Since his accession to power, he shared his power with Jasper Bosman who becomes the Grand Governor of Vroopa the government A new reform of the Wallenian administration was launched towards increased efficiency and discipline. plus to give citizens more of a voice in the Kingdom This is a significant change in the direction of appointments, given that Bosman critized the Wallene absolute monarchy the previous administrations the grand governor, traditionally a an ally of the king, tended to double as foreign minister.

However on 19 December 2019, Joseph, King of the Vroopans maintains that the government wasn't dissolved. This claim comes from the fact that neither the King or the Ciitzens council had dissolved the government. Morsi decided to use their power to state that the government hadn't been dissolved and that it is being revived. Later on 2019 the king called a new Citizens Council in order to aid with revival. It is currently undergoing a process of "resuming government activities," or trying to revive the original kingdom. The nation was renamed into Wallenia to restore the macronational name of the island (De Wallen)

A second revivial was due to the COVID-19 pandemic when Joseph once declared that the nation will be re-restored to not abandon Vroopan/Drosmanian/Wallene history, Soon he met with the former monarchs of Vroopa on zoom proclaming the reawakining of Wallenia, 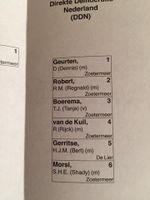 Morsi along with John Charlton Rudge are one of the few micronationalists that also held office in their respective macronations He is politically active in his macronation, seeing public service as "the ultimate service to his nation" his first political campaign was back in 2014 when Shady Morsi was urged by a group of friends to enter the race as a candidate. Although he was ineligible (he was 15 years old at the time. Was not on the ballot and didnt live in Oegstgeest) he actively campaigned. with support of Najim Oumejjoud who becomes his campaign manager Morsi's slogan was "Are you fucking tired of politicians write in Shady Morsi" The goal of the campaign was to make many votes invalid as possible and to eventually elect Morsi as a candidate Morsi campaigned on the abolishment of capitalism, and to improve public transit. Despite that Morsi finished 8th with 90 votes but was declared invalid due the Dutch system not recognizing write in votes. Only 27 votes separated Morsi from the ballot registered libertarian Lukas Tjeima

He was an active member of GeenPeil and campaigned for GeenPeil during the Dutch general elections, 2017

In 2018 Morsi was a candidate for the small Direct Democracy Netherlands in Zoetermeer, a party that wanted to have more direct democracy and more citizen involvement, Morsi was placed 6th and last and acted as a lijstduwer Morsi accepted the position due to his college deadlines but campaigned nevertheless. Morsi acted also as the campaigns offical photographer. the list finished second last in the election with 278 votes with Morsi getting 13 preference votes beating Bert Gerritse who had 9 in the end Morsi expected to get 57-60 votes from friends

Morsi conceded the election on behalf of his party

After the election. Morsi left DDN and joined the Labour party In September 2018, Morsi ran for the local party leadership and was confirmed as an official leadership contestant for the Labour Party in Zoetermeer where he finished third. His platform was more left than the other candidates

Morsi moved to Schiedam to live under supervision in 2019-2020 and joined the Christian Union. Morsi reasoning for the party switch was because the "party is progressive on issues i find inportant but also conservative on medical-ethical questions" Morsi was appointed duo-councilor, meaning that he could not vote but could participate in committee meetings. Morsis portfolios are COVID-19, IT, Healthcare, Education and Saftey

Morsi worked hard to build up the center of the party on social issues. Unlike other members, Morsi a fervent conservative, in his maiden speech Morsi said that "We are here for the people of Schiedam and we are elected to serve them" He developed a right wing position on city government and critizised the municipal executive for not having a COVID exit strategy. Morsi has called for more aid to help the Maasland Ziekenhuis including funding and programs around reproductive healthcare,