Galte (/ˈgɑːltə/), officially known as the Principality of Galte, is a self-proclaimed sovereign state near Memphis, Michigan. The capital of Galte is Capitolium.[2] Galte was founded on 8 December 2019, when the signing of the Declaration of Independence took place in the Capital Territory, which is no longer a part of Galtean land. It was originally called the Grand Republic of Usmuani and functioned under a democratic socialist government.

Galte was a constitutional monarchy led by King Michael I of Galte for much of its history, a status which had been restored as of 2 September 2021 with Michael serving as Prince rather than King.

The name Galte was chosen at random at the time of its founding. The founders wished to have a professional-looking website and domain and decided on the name Galte as the first two letters correspond to a free domain offered by Freenom, .ga.

Funnily enough, we chose the name Galte because we were too cheap for anything else... We just wanted a free domain, and the .ga domain looked good, so we picked the name Galte to go along with it. I almost regret it now since that name makes absolutely no sense, but we're a year on. It's too late now.

The government originally attempted to cover the true origin up by affixing it to a Norwegian word that happened to exist. Despite its origin, the name stuck due to many people saying the name was "unique" and "memorable." 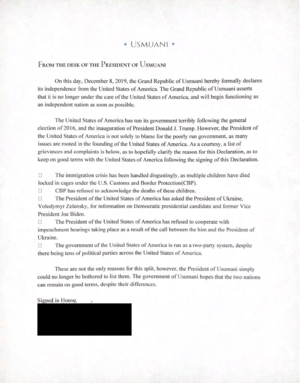 The Declaration of Independence of the Grand Republic of Usmuani. Usmuani was the earliest form of what is now known as the Principality of Galte.

Michael Shepard signed the Declaration of Independence on 8 December 2019, and named the nation the Grand Republic of Usmuani. As he was the sole founder of the nation, he declared himself President of the Grand Republic. Elections were held for the First Congress of the Republic, and Senators were appointed. Shortly after (the exact date has been lost to history), the nation adopted a simple bicolor flag with green on top and white on the bottom.

The nation's momentum fizzled out and laid dormant until early April 2020. The President abolished the Congress and renamed the nation the Republic of Galte. He, along with the two other citizens, drew up a constitution and claimed Low Island, in the South Shetland Islands of Antarctica, as the nation's territory. The constitutional convention ended on 2 June 2020, and the new constitution was adopted that same day. 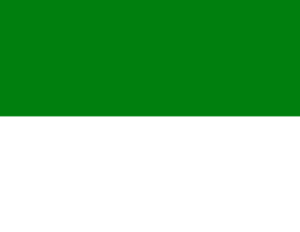 A recreated version of the flag of the Grand Republic of Usmuani.

On 24 June 2020, the Republic of Galte was admitted into the League of Independent Nations, with a unanimous vote from all Chairmen.

On 5 August 2020, Shepard signed an executive order declaring Galte's claim to Low Island void and claiming Waugoshance Island in Lake Michigan as the nation's territory. 20 days after claiming Waugoshance, the Republic of Galte transitioned into the Kingdom of Galte following a referendum held by Galte's citizens.

Galte withdrew from the League of Independent Nations on 11 November 2020, following a controversy involving the Principality of Ustea.

Following weeks of debate with advisors and leaders of other nations, Galte elected to become a colony of the Kingdom of Atiera. The decision was reached on 21 November 2020, and the Kingdom of Galte became the Principality of Galte seven days later.

On 30 January 2021, the Principality of Galte gave up its claim to Waugoshance Island, citing the fact that "the Government of the Principality has no control over the island."[5] Following this relinquishment, the colony's sole claim was the claim located near Memphis.

A variety of personal and private reasons, as well as the Prince's deteriorating mental state, caused an immense strain on the relationship between Munroe and Michael. The House of Commons of Atiera, of which Michael acted as Speaker, had fallen mostly inactive, and as a result of this, he resigned as Speaker of the House of Commons.[6] On 24 August 2021, Munroe was allegedly "acting inappropriately" in the Discord server of the Cupertino Alliance, resulting in many people coming to Michael asking for him to take action as the primary delegate for Atiera. He recalled Munroe from the delegation, and shortly after the recall, he was faced with a vote of no confidence in the Kingdom of Oskonia. Munroe resigned as Oskonia's prime minister, and signaled his displeasure to the Riksforsamling's members with unscrupulous insults. This was the final straw for Michael, who revoked assent from the Galte Bill which declared Galte a colony of Atiera.[4]

It is regrettable that the current state of affairs has led me to make this decision, but everyone must pick their battles, and maintaining Atiera will no longer be mine.

Galte was now an independent nation for the first time in 9 months, and with the support of multiple delegates from the Cupertino Alliance and former Atieran citizens, the rebuilding of Galte began. On 2 September 2021, Michael adopted the Constitution of the Principality of Galte by in Royal Decree II/2021.[7] Following the adoption of the constitution on 3 September, the states of Equitas, Otium, Capitolium, and Waterview were established along with electoral ridings for the states.[8][9] The next day on 4 September, general elections were declared to be held on 14 September 2021 by Michael to elected Deputies to electoral ridings and the Minister-President, on the same day the state of Capitolium was designated as the capitol of Galte.[2][10] On 15 September 2021 the results of the election were announced:

Otium West was left vacant, after a majority of voters did not prefer the only running candidate, John Lakes.[11] Otium West would lated be filled during a by-election by Sander Koff on 17 October 2021. Carson Snyder would then be unanimously confirmed as Speaker for the Chamber of Deupties on 19 September. The Chamber would go on to confirm the sitting government and ratify the Universal Declaration of Human Rights.

Inactivity would soon begin loaming over the government due to the a lack of direction strewn on by the inconsistent availability of Prince Michael. To get ahead of the issue, Carson Snyder would be declared Regent of Galte by joint-resolution of the cabinet and Prince on 31 October.[12] With the cabinet of Galte providing advice to the new regent, nearly a month later on 30 November 2021 two decrees were issued. One of the decrees raised the minimum age to be a citizen to sixteen with amnesty given to those who were fifteen, anyone under fifteen would be given honorary citizenship until they reached the needed age. This resulted in five citizens being given honorary citizenship, most notably Koff and McPhail, who would be dismissed as deputies due to the loss of their citizenship status.[13] Another decree would be issued on the same day calling for a required renewal of citizenship, where all citizens, both honorary and full, would need to renew their citizenship to keep it.[14] This renewal is still ongoing.

The Principality of Galte is almost entirely flat land. Its steepest hill is about 5 feet. The Principality is broken up into two main sections, Belle City and the lower river area. Belle City features a pavilion, where in-person government meetings are held, and a fire pit for gatherings involving the in-person citizenry of Galte. The lower river area is where most lodging is currently done. The area is shaded and dry, making it suitable for the tent camps often set up in the nation.

The Principality of Galte experiences relatively warm summers and frigid winters. Its Köppen climate classification is Dfb, although some seasons fall more in line with a Dfa climate type.[15]

Galtean culture is remarkably similar to American and Canadian culture. The Prince of Galte is Jewish, resulting in the government, possibly unintentionally, giving the nation many cultural aspects that are similar to Jewish culture. 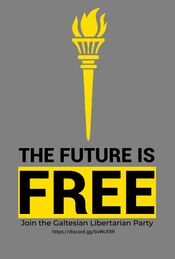 A political poster made sometime during the Republic era of Galte, which advertises the now-defunct Galtesian Libertarian Party.

The Principality of Galte is a constitutional monarchy, with the head of state being the Sovereign and the head of government being the Minister-President. The legislative branch is known as the Chamber of Deputies and has 6 members.

The intermicronational view of the Principality is generally positive. Althought it holds positive relationships with many nations through its membership in the Cupertino Alliance, Galte has held very few formal foreign relations post it's independence from Atiera due to it not being a priority of the sitting government.

Before becoming a colony of Atiera, Galte had fairly expansive relations with other nations due to it's membership in the League of Independent Nations.