Most Serene Republic of Sequeria

The Most Serene Republic of Sequeria is a micronation located in Southeast Asia. It is a partial member state of the Cycoldian Imperium.

The name Richensland comes from the word Rich and land, signifying that it is a land full of rich culture and diversity. The country was called Koldovia until 2020. However, the King changed the name of the country to one that reflects the nation. Despite this being said, the country is not that diverse and is not really that rich. The name is more of a misnomer.

The name Koldova, which is the original name of the country, does not mean anything. It was selected randomly by its founders. Since it is not the official name, it now serves as the country's second name.

When translated into other languages in full, only part of the official name "Republic of Richensland" is translated. This is to ensure simplicity and accuracy of the transition as longer translations tend to be less accurate.

Richensland has existed in several eras. The eras changes due to regime changes and new constitutions or consequential constitutional amendments.

Richensland's founder has been interested in politics and nation building. He founded several Micronations which were experiments of different government. After a few years of trying, he founded the first Richenslandic state.

Flag of the Kingdom of Richensland

This period of Richensland's history is often associated with it being isolated from the outer world and is most commonly named the Monarchical era.

Immediately after a coup by M. Ryan, M. Ryan together with Aniq Sufyan and Nayli Aleesya signed the Declaration of Establishment, which guranteed the nation a republican government and the creation of the Plurinational State of Richensland as a provisional government. 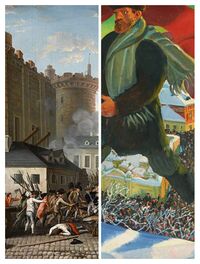 Both French and Russian revolutions, have inspired revolutionary and rebellious attitude in Richensland

Both the French and the Russian revolutions have inspired a movement dubbed the Richenslandic Revolution, an informal term to describe the revolutionary attitudes of Richensland's founders to create a micronation to spread and establish Freedom, Liberty, Equality, Fraternity, and Eternal Peace, the founding values of Richensland.

Unfortunately, such attitude has caused extremist views and hardline policies. This allowed and paved the way for a dictatorship with a totalitarian style of ruling a nation. Because of this, Richensland has been banned from joining the Grand Unified Micronational despite Richensland not having any wishes to.

The revolution has inspired an ongoing second revolution in Richensland, that being the Cultural Revolution. Its aim is to purify the nation from old traditions and unreasonable manners of culture belonging to other races. The government has then encouraged its own culture as part on its extrime nationalist views which it better than the others.

It also developed a cult of personality around Aniq Sufyan. It has also allowed human rights abuses as citizens who are suspected of betraying the revolution live in constant fear and paranoia of being arrested by the military and charged without a trail and proper evidence.

The current constitution has been amended once by the Constitution Act, 2021 on 22 September 2021. According to the amended constitution, the head of state is the President of the National Convention and Queen and the head of government is currently the Prime Minister of Richensland.

The government of Richensland functions with three separate branches of power.

LGBT rights are considered a fundemental right by the government. Rights are protected by the Constitution of Richensland which prohibit discrimination. After the rift with the Aniq Sufyan Government, Arthur Lacey Scott published The Treason Act, which abolished all policies of discrimination.

The Republic Cultural Centre (TRCC) of Republic Polytechnic in Sjerelyslau.

Richensland is divided into 8 districts and 2 major mainland territories, which consist of the capital city, the Sjerelyslau Capital Territory and a water catchment area which is officially claimed by Richensland but the government of Richensland holds no power over it, even in their own eyes. Everything, except for the water catchment area, is under the direct authority of the republic.

Inspired by Molossia, Richensland's declaration of "permanent neutrality" was formally recognized by the Constitution of Richensland in 2021.

The declaration stated that the neutrality would prevent Richensland from participating in multi-national political organizations, like the Grand Unified Micronational, but allows informal assistance. Its neutral foreign policy has an important place in the nation's role. Richensland has diplomatic relations with a limited number of micronations.

This foreign policy was to avoid conflicts or wars such as the the Richenslandic Diplomatic Crisis.

An exception doesn't have to be made if Richensland is joining an intermicronational organization that it help founded.

It was originally the foreign policy of the Plurinational State of Richensland, as it's continuation, Richensland currently has the rights to it.

Richensland regconises all UN members with the exception of a few. Though not mandated by any law, if a state has done something that the Parliament of Richensland deems threatening to the world or to Richensland, the President of Richensland, with the consent and advice of the Prime Minister on the issue, decree a national emergency to address the issue. The nation can either be:
1. Santioned or
2. Not regconised.

The same applies to micronations.

Richensland has never doubted Isreal's right to exist however, to do so, cannot have Palestine.

Richensland regconises Isreal as an independent state, however only regconises Palestine as an entity, not a state. The current Prime Minister has stated that he may change this policy though

The Sigtelageecn is the military of the nation. It has air, land and sea presence and also internet presence. The head of state serves as the Commander in Chief in ex officio capacity during his tenure.

There are four branches in the Sigtelageecn. These are the Ground Forces, Air Force and Navy. There is also an internet police which is part of the military under the name "Richensland Terrorist Forces" and commands loyalty to the nation in discord servers. It's methods include spamming, raiding and nuking servers if necessary and is supported by the government.

The Sigtelageecn is not a standing army but tries it's best to be a proper army.

Richensland has no official national sport. Association football has been widely popular with citizens to the level of a unofficial de facto national sport.

Other sports of interest include Cricket which is mostly played by the Indian communities.

Richensland has also never had the chance to be represented in an intermicronational sports event as it does not have the budget and the logistics to do so can never be fufilled by the nation. Thus, Richensland has never won a medal.