The Cupertino Alliance Factbook, also known as the CA Factbook is a reference resource produced by the Cupertino Alliance (CA) with almanac-style information about the countries of the member nations of the Cupertino Alliance, based on the Central Intelligence Agency's World Factbook. The factbook is available on the Issuu website[1], but it is also available for download as a pdf for offline use[2]. It was started on 26 May 2020 and planned to be released in June - July 2020. Its release date was delayed as the Cupertino Alliance's member base increased dramatically during the COVID-19 pandemic. On 30 January 2021, the Alliance announced that the full factbook would be published in February 2021. A public preview copy of the factbook was released to the public on the same date, containing information about the Kingdom of West Sayville[3].

In the 17th session of the Cupertino Alliance, Jayden Lycon wanted to make a version of the CIA World Factbook for Cupertino Alliance members. The creation of the Factbook would also involve management of an inter-micronational census to gather information. A plan was written regarding the Factbook which included topics that the project would cover[4], with a follow-up report detailing how the information would be added. [5] Near mid-June 2020, a prototype of the physical copies of the Cupertino Census was made in both English[6] as well as in the Alternative English Romanization System. [7] However, plans for the Census and Factbook were later cancelled in August 2020 due to a focus on the execution of the Regional Sessions Act, as well as time constraints due to extra-curricular and recreational activities.

The project was revived on 9 November 2020 with the establishment of a standing committee in order to manage the census and Factbook. [8] The revival was later talked about in the following European and African session on 15 November 2020[9], where it was met with a positive response by Parliament. [10] The beginnings of the standing committee was to resolve how the census could be done physically considering the coronavirus pandemic. Due to the lack of time, as well as the shipping costs and logistical systems needed[11], the choice of allowing physical entries of the Cupertino Alliance Census was scrapped. [12]

A preview edition of the factbook was released to the public 17 days before the full edition was published. The Factbook was published on 14 February 2021, one day before the chairmanship of Jayden Lycon was to end. The next literation of the Census/Factbook was planned for June or July 2021[13], with an tentative plan being released on 1 July. The plan called for the census to be held on 18 July - 18 August, with the Factbook being released by 5 September. [14] 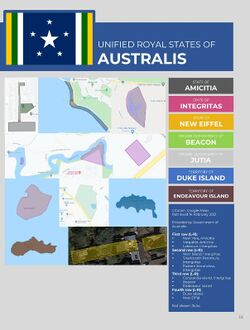 Page 18 of the Factbook, which contains a map and list of subdivisions for Australis.

The Factbook includes a list and reasoning on the questions asked, as well as nation profiles. Each nation profile contains four sections, which are geography, population, government, and Cupertino Alliance information. The first section bears the meat of the Factbook and comprises of data sourced from the CA Census or their respective governments:

The next section, government, contains information relating to a member's government. This includes:

The last section lists information relating to a member and their relation to the Cupertino Alliance. This includes:

Not every profile has every category (e.g. Desert District lacks a category relating to government). Furthermore, at the start of a nations' profile page, there is a map as well as colour coated list of sub-divisions.

The Factbook is in the public domain, licensed under the Creative Commons Attribution-ShareAlike 4.0 International. Any person can reproduce the document without asking for permission. When referencing the factbook, the author must be attributed.

The main method of sourcing information for the Factbook is the Cupertino Alliance census. The census is a population census limited currently to online responses. The census works on a centralized system, where individual Google Forms is issued by the alliance to each nation's governments, where it is then the respective governments' responsibility to distribute these forms to their citizens.

Census responses that are not on the Factbook are then deleted post-publishing after a grace period has passed for corrections.

A major error relating to separate options for Roman Catholicism, Protestantism, and other forms of Christianity was noted but it was too late to fix it. It was decided to keep the options for the Factbook, however, the option is planned to be merged into a singular "Christianity" option in the next census. Furthermore, changes including the renaming of "American Indian" to "Indigenous", the inclusion of the Portuguese, Japanese, and Punjabi languages, and the phasing out of "dropdown" questions are also planned for the next census.

As of February 2021, The CA Factbook contains information and data about 22 micronations, which can be divided into two groups:

Nations that participated in the December 2020/January 2021 CA Census

Since the CA Factbook is sourced from the online-only CA Census, numbers may not reflect citizenship numbers. Leon Montan noted an error on 15 March 2021 relating to the subdivisions of Ponderosa Hills, conceding that it was Montan's fault.