The Republic of Scoria is a micronation that declared independence on March 3, 2018. Scoria consists of the two islands of An Scairbh (Scariff) and Duínis (Deneesh), located at the far south west of the Island of Ireland. The government resides in an enclave fully surrounded by the Republic of Ireland.

The name Scoria is derived from the mineral scoria, a basaltic lava ejected as fragments from a volcano, typically with a frothy texture. As the islands of An Scairbh (Scariff) and Duínis (Deneesh) are of volcanic origin this is the most found type of ground on both islands.

The Republic of Scoria consists of the two islands of An Scairbh (Scariff) and Duínis (Deneesh) situated in the far south west of the island of Ireland. In 1837 only one family lived on An Scairbh (Scariff); their main work was to care the cattle which grazed on the island. On the summit of the hill there were remains of an ancient hermitage and, on the east side, ruins of a church. In 1837 on Duínis (Deneesh) resided three families who mainly lived on the cattle which grazed on the island. After both islands were very neglected by the irish government R.M. Grainger took possession of both islands in the Atlantic Ocean and declared them as independent by forming the new Republic of Scoria.

Both islands are not ocupied at this time, the government of Scoria resides in Scoria's capital Riverstown, an exclave near the city of Corcaigh. This exclave is fully surrounded and landlocked by the Republic of Ireland. 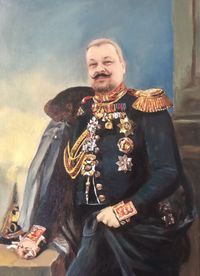 Scoria is governed by a democratically elected government. A Taoiseach (Prime Minister) who is elected by the Dáil (Parliament) runs the government which is appointed by the Uachtarán (President).

Current head of state is his Excellency Uachtarán (President) R.M. Grainger. Until elections can be held R.M. Grainger also holds the position of acting Taoiseach and Minister of foreign affairs.

The three powers are independent from each other and are supervised by independent commissions which are elected by the people. There is a police force which is is seen as guards and guarantor for the peoples' security. There is no right for citizens to keep or carry firearms.

So far Scoria is recognised and recognises and/or has agreements of mutual recognition with these nations:

The Scorian government is in the process of concluding mutual agreements with many more independent nations.

Scoria recognises these states and regions as independent nations as these regions either are occupied by other nations and/or the ethnic peoples are victims of repression in many cases or as their right of independence is not respected:

Even Scoria is a strong supporter of a united world without borders, at the current point it is not acceptable that ethnic groups or regions that have legitimate reasons to form an independent nation are occupied and supressed by other mighty nations.

Scoria does not have armed military forces.
Only police officers carry firearms.

Scoria is one of the most western country of Europe. The climate is mild mediterranean in summer with temperature up to 20 °C and mild winters with temperatures falling below 0 °C rarely. Due to the location in the Atlantic Ocean strong winds can appear.

Scoria wants to become the leading nation for the development of new, groundbreaking technologies. Electricity will to be produced from renewable sources as solar power, wind power, tidal power. Lignite-fired power plants are not an option. Nuclear power may be considered if 21st century technology is used and the reprocessing of used elements is secured. Cars with alternative technologies will be promoted. Electric, fuel cell and gas powered cars are the modern world's future.

Highest focus is on education of the youth; research, development and culture are of highest significance. Scoria wants to give the coming generation the best possible education to prepare them for coming challenges. Scoria's culture is informed by a deep respect for each other and a high level of tolerance.

​Principles and Core Values of Scoria

Scoria is a secular, democratic and multi-ethnic republic, guided by the principles of non-discrimination and equal protection under the law. All Scorian citizens have the same rights and duties. The LGBTQ+ community is a part of the Scorian society, discrimination of any social group is not tolerated and will be prosecuted.

All financial institutions are nationalised and run by the goverment to prevent greed and to support all citizens with fair conditions. This applies to banks, insurances and similar institutions. These institutions do not have the target to create profit but to operate cost-effective only to ensure all citizens can receive fair conditions for all their financial transactions. This applies to all financial transactions, the security of the peoples' contributions is of highest priority.

Marriage is limited to two full aged individuals independently of their gender.

In Scoria no death penalty exists. Evident crime as murder, rape, child molestation is to be punished with a lifelong imprisonment, no shorter sentences are considered.

Religion is a private affair. State and religion are strictly separated. Every citizen is free to practice their religion in a private environment. Promotion of fundamentalist views is not accepted. State laws do always outreach any religious rules.

There is no right for citizens to keep or carry firearms.

Scoria does not have armed military forces.

The termination of a pregnancy is legal. The women's well-being is more important than a cluster of cells. The decision is made by the pregnant individual only.

Electricity is to be produced from renewable sources as solar power, wind power, tidal power. Lignite-fired power plants are not an option. Nuclear power may be considered if 21st century technology is used and the reprocessing of used elements is secured. Cars with alternative technologies are promoted. Electric, fuel cell and gas powered cars are the world's future.

Find more details about the values and the idea behind Scoria here.

Press and media are free, censorship does not exist. But everybody can be held responsible for their statements. All newspapers, TV channels, webpages etc are free in their coverage, there's no governmental intervention except if content is propagated that contradicts the core values of Scoria as defined in the scorian constitution. Hate speech is not tolerated.

Official currency of Scoria is the Buck (฿) which is subdivided into 100 Chucks (¢). 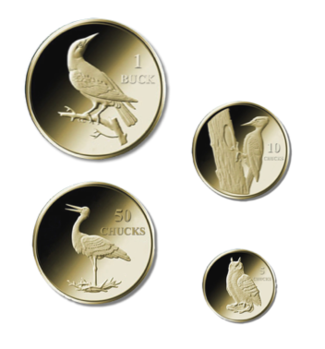 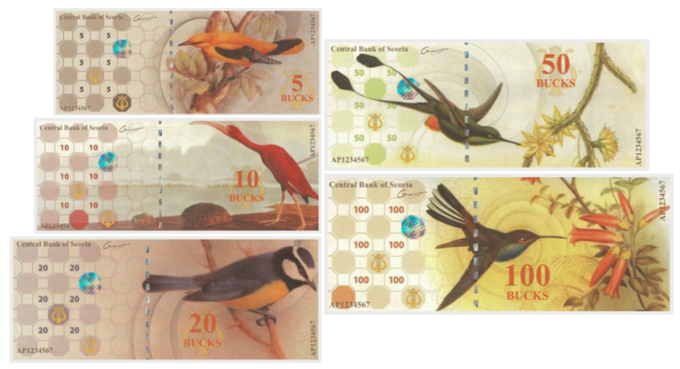 Theme on all notes and coins are different birds.

Mid term Scoria has the target to become the first money free nation and to process all payments, even the smallest, digitally. Every citizen will hold a dynamic and interactive payment card that gives an easy overview about all transactions via an included display. All payments will be done contactless, a full integration into smart phones and smart watches is a matter of course. The technology is available today and could be rolled out immediately. 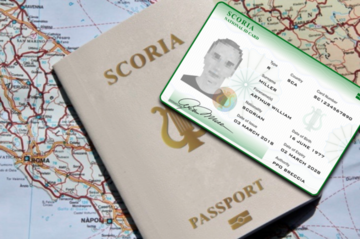 Currently Scoria is not accepting applications for citizenship.