From MicroWiki, the free micronational encyclopædia
(Redirected from Yu-Xia)
Jump to navigation Jump to search

The Second Crowned Republic of Yu-Xia, more commonly known as the Republic of Yu-Xia or Yu-Xia, is a micronation located in San Diego, United States. The nation was first established on 3 February 2020, when the Emperor, Matthew I, left the Altearn Federation to form the Yu-Xia Republic. The nation is a constitutional monarchy, with the 皇帝 (Emperor) acting as a figurehead and the head of foreign affairs. As of right now, Yu-Xia is split into seven municipalities and one Special Administrative Region.

The term "Yu-Xia" was first coined by Emperor Matthew I, with the "Yu" part of the name representing the Chinese legend Yu the Great, the alleged founder of the Xia Dynasty and the "Xia" part to honour the somewhat mythical Xia dynasty.

Yu-Xia was founded on 3 February 2020 by Matthew Xia under the name of the Republic of Yu-Xia, which started as a provisional monarchial state with many of the intended democratic positions being appointed by the Emperor. During this time period, the nation grew rapidly with many residents in the local area gaining citizenship and the expansion of land claims to encompass more of the local area. On 29 March 2020 Yu-Xia held its first election for the position of Prime Minister and five seats within the now-defunct 委员会 (Council). This election marked the formal introduction of democracy into Yu-Xia and the de facto adoption of the First Constitution into the country. However, over the course of the next month, activity within the nation began to wane with several of the Council members becoming idle or outright leaving the position without notice. This period of dormancy is what lead Matthew Xia to rewrite a second draft of the Constitution in early May.

On 7 May 2020, the Emperor ratified a second constitution which introduced major political reforms to the Republic. One of the most predominant changes, out of many, was allowing non-local residents to gain citizenship within Yu-Xia, under the classification as a global citizen. Additionally, to properly represent the interests of both local residents and global citizens, commonly referred to as "locals" and "globals", the 委员会 (Council) was dissolved and subsequently replaced by the 国民议会 (National Assembly), the current bicameral legislature consisting of the 地方理事会 (Local Council) and 全球理事会 (Global Council). To represent both groups within the nation, the Local and Global Councils are made up solely of local residents and global citizens respectively. However, each council was not structured using the same system, as the Local Council consists of all local residents within Yu-Xia while the positions within the Global Council are intended to be elected by democratic means. Originally, these changes did not change the inactive state of the nation, as the current Prime Minister had to appoint citizens to the Global Council, but eventually, the aforementioned reforms began to spark and grow an active global base for Yu-Xia, bringing in new citizens and ideas into the nation.

Following the June 2020 General Election, Yu-Xia began to enter a period of rapid growth and development in nearly all of its aspects that lasted for around seven months, ending in February 2021. The work of Matthew Xia, who was elected as Prime Minister in the June 2020 Elections as well as serving as the standing Emperor of Yu-Xia, is highly credited for the rapid development of the nation during his tenure as Prime Minister. Under the Xia Administration, the Republic of Yu-Xia drastically increased in activity and participation, developed a proper cabinet, saw the continued success of the YXAA Space Agency, founded the largely successful and accredited news agency the Xijing Morning Post, gained admission into the prestigious Grand Unified Micronational, and signed formal documents with more than a dozen other nations outlining formal diplomatic relations. Even with the changing of the Prime Minister's office in the December 2020 General Elections, the momentum from the Xia Administration continued with the foundation of a Treasury within the Republic, fueling major economic growth within the nation, as well as the expansion of the already robust diplomatic capacity of the Republic of Yu-Xia.

The Republic of Yu-Xia is a unitary government with a presidential system and a constitutional monarchy titled the 皇帝(Emperor). The head of state of Yu-Xia is called the 总理 (Prime Minister), even though the country technically operates by a presidential system. The current Emperor and Prime Minister of Yu-Xia is Matthew Xia, though he will not seek re-election for the Prime Minister position for the next election period due to concerns over royalty being involved in politics. The legislative power in Yu-Xia is vested within the 国民议会 (National Assembly), a bicameral legislature consisting of the 地方理事会 (Local Council) and 全球理事会 (Global Council). The powers of each major governmental body within Yu-Xia are outlined in the Constitution of the Republic of Yu-Xia, the main document of the country. The constitution can only be amended with a 2/3 supermajority vote in both Councils of the National Assembly and the approval of the Prime Minister, which cannot be overridden. The political system within the Republic of Yu-Xia takes much inspiration from the political rule within the United States and certain elements from Dynastic China.

Being a constitutional monarchy, the Emperor acts as the monarch and the head of state of the Republic of Yu-Xia, with limited powers within the government of Yu-Xia. The monarch has significant power over the Ministry of Foreign Affairs and also any legislation regarding foreign affairs passed by the National Assembly. Additionally, for an offensive declaration of war to be declared, the Emperor must approve the declaration of war to make it official. The monarch is officially the chief diplomat within Yu-Xia and is also considered to be one of the most influential figures within the country, responsible for the foundation and most of the legislation passed within Yu-Xia holding a seat on the Local Council of the National Assembly.

The Republic of Yu-Xia is a part of the following organizations and alliances:

The Republic of Yu-Xia has unilateral recognition with the following nations: 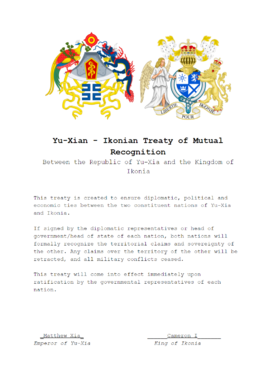 A Mutual Recognition Treaty between the Republic of Yu-Xia and the Kingdom of Ikonia signed on 12 August 2020.

The Republic of Yu-Xia has bilateral recognition with the following nations: 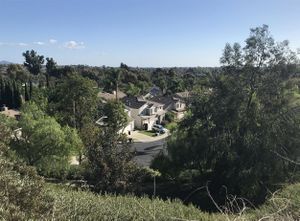 The topography of Yu-Xia consists of a relatively flat area aside from a low ridge extending from 北埃利霍 (North Elijo) to 科伦 (Kelun), splitting the country into two topographical regions. The western border of the republic encompasses the whole Pacific coastline of Yu-Xia, whilst the western parts of the northern and southern borders are surrounded by two wetlands, respectively classified as lagoons. The western coastline of Yu-Xia consists mostly of ocean bluffs, with sandy beaches in front of the coastal foothill ridges. Yu-Xia is very urbanized and developed, with much of the landscape being covered with infrastructure, however, there is an ample amount of nature and parks within the country.

The Republic of Yu-Xia is located in San Diego, which is classified as a semi-arid climate on the Köppen climate classification.[21] Yu-Xia has a very mild, Mediterranean climate and is situated next to the coastline of Southern California. The average daily high temperature is 72 °F (22 °C). Temperatures below 40 °F (4 °C) and above 85 °F (29 °C) are rare. The average rainfall is about 14 inches (360 mm) per year. The wet season lasts during the winter and spring when temperatures are usually cool. Average daytime temperatures hit 65 °F in winter and spring when rain and marine layer (fog) are common (May Gray/June Gloom). Nighttime lows range from 45-55 °F. The dry season lasts from summer through fall, with average daytime temperatures ranging from 75-85 °F, and nighttime lows being from the upper 50s–60s°F. Ocean water temperatures average 60 °F in winter, 64 °F in spring, 70 °F in summer, and 66 °F in fall. In winter, strong Pacific storms can bring heavy rain.

The Republic of Yu-Xia, while heavily based around Eastern, specifically Chinese, cultures and traditions, maintains a distinctly American culture alongside its Eastern values, being an enclave within the United States of America. The primary language of Yu-Xia is English, though many residents are currently studying a second language, the most common ones being Spanish, Chinese, and French. Both American and Chinese holidays and traditions alike are integral to the Yu-Xian culture, with holidays such as Christmas and the Lunar New Year being celebrated widely throughout the nation. The national dish and drink of rice and noodles and Maruchan Instant Noodle Broth respectively were chosen mainly by the Emperor's fondness for the food and drink, however the national dish is widely consumed within Yu-Xia and is viewed as a staple food within the nation. 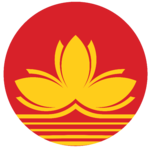 The Republic of Yu-Xia has a relatively large news presence for its small size, with the Xijing Morning Post, the largest news publication site within Yu-Xia, receiving over 200 unique visitors in 2021, around five times the size of the current Yu-Xian population. Other news publications include the New Victoria Times, a news agency located within the Yu-Xian colony of New Victoria and formerly the Yu-Xian Gazette, which was the precursor to the now-defunct Micronational Gazette. Additionally, there are also a handful of private YouTube channels made by Yu-Xian citizens, the most popular creator being "UBS Guy", run independently by current-Prime Minister Nathan Jiang. 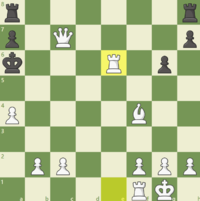 A game of online chess between two local residents ending in a checkmate during a Game Night in Early March of 2021.

While the national sport of Yu-Xia is martial arts, as a nod to the historical combative arts of East Asia, there are only a handful of practitioners of various martial arts within the nation, including the Emperor Matthew Xia. There is also a small body of cross-country and track & field athletes, though the most popular types of sports and games are typically not physically demanding. Common sports played within Yu-Xia include chess and e-gaming, those being popular video games such as Minecraft, Stardew Valley, Valorant, etc. On most weekends a game night is hosted by the Yu-Xian Minister of Culture, currently Ezri Ambriz, a tradition that has been ongoing since November 2020. Other sports which are played amongst some citizens are basketball, golf, and additionally volleyball.

The economy of the Republic of Yu-Xia is quite small, with a Gross Domestic Product of around 7.60 USD. However, the private sector is rapidly emerging, with a company being formed recently in Mid-January named Cosmos 3D and being officially registered by the Board of Treasury on 24 January 2021.[23] The recently-passed Yu-Xian Economic Reform Act was also an attempt by the government to manage and incentivize economic growth via the establishment of the Board of Treasury, which saw some success with the registration of Cosmos 3D.