The Kingdom of Pinelandia (French: Royaume de Pinelandia), commonly known as Pinelandia, is a micronation located on a technically unclaimed island in Bottle Lake, Maine. Pinelandia is a constitutional monarchy with King Vincent I as head of state.[2]

The name Pinelandia was coined by Prime Minister Charles Burgardt upon the founding of the kingdom in 2019. The name is composed of "Pine" and the germanic suffix "-landia", meaning Land of Pine.

His Majesty's Government in Pinelandia

The Government of the Kingdom of Pinelandia, officially known as His Majesty's Government in Pinelandia (French: Gouvernement de Sa Majesté en Pinelandia) is a constitutional monarchy. The document linked above provides an overview of the government’s structure. It is designed to be simple and efficient, hence the reason why there doesn’t appear to be three distinct executive, legislative, and judicial branches.

The King of the Pinelandians (French: Roi des Pinelandiens) is the ceremonial head of state of Pinelandia. Despite being largely disconnected from Pinelandian politics,[3] the King has complete authority over members of the Royal House (and by extension, the line of succession to the throne). 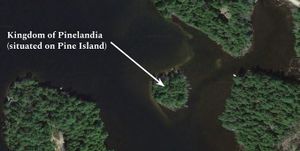 A map showing the location of the Kingdom of Pinelandia.

As stated previously, Pinelandia is located on an unclaimed and formerly unnamed island in Bottle Lake, Maine. It is important to note that while the country itself is called “Pinelandia,” the island it claims as its territory is known as “Pine Island.” Pinelandia gets its name from a large amount of pine needles on Pine Island, along with the area’s abundant evergreen trees. A map of the area is shown below:

The Principality of Teplonia was a semi-autonomous principality under Pinelandia.

Given its proximity to the Canadian border, English and French are the official languages of the Kingdom of Pinelandia. However, most, if not all, of the Kingdom’s population speak English as a first language. As a result, French is usually seen only as subheadings on official government documents.

Flag and Coat of Arms of the Kingdom of Pinelandia

The flag of Pinelandia features two pine cones and several pine needles placed on a green and white background.

The Coat of Arms of the Kingdom of Pinelandia (French: Armoiries du Royaume de Pinelandia) features elements symbolic of Pinelandia: three fish, embodying the island’s proximity to an abundant supply of freshwater fish, and a brown pine cone symbolizing the nation’s namesake (Pine Island and its abundance of pine trees). The yellow and green colors represent the warmth of the sun and vast forests that surround Pinelandia, respectively. The entire shield is crowned with a simple heraldic crown, representing the nation’s status as a monarchy. Its blazon is as follows: Or on a chief engrailed vert three fish azure a pine cone tenne.

The Flag of the Kingdom of Pinelandia (French: Drapeau du Royaume de Pinelandia) features two pine cones and several pine needles placed on a green and white background. The green represents the pine trees that lend their name to Pine Island, and the white for Pinelandia’s devotion to peace, respectively.

The Royal House of Pinelandia

The Royal House of Pinelandia (French: Maison Royale de Pinelandia) comprises all individuals in line to the Pinelandian Throne. The King of the Pinelandians is the house’s head and is responsible for appointing and removing members from the Royal House, as well as granting royal titles to said members of the House. It is important to note that the term “Royal House” has been used instead of “Royal Family” to denote the fact that individuals not related to the monarch may be included in the royal line of succession.

Pinelandia’s national motto is “For King and Country!” (French: Pour Roi et Pays!); the motto may change slightly depending on the reigning monarch’s gender. Although the King of the Pinelandians has largely ceremonial duties, the motto reinforces the monarch’s symbolic importance to the Pinelandian national identity.

Heraldic matters in Pinelandia are under the jurisdiction of the Ministry of Heraldry (French: Ministère de l'héraldique). The Minister of Heraldry is ex officio the Chief Herald of Pinelandia, responsible for approving armorial grants to Pinelandian citizens and foreigners. All coats of arms are publicly accessible in the Pinelandian Heraldic Registry. It should be noted that armorial achievements are awarded, meaning that citizens are not permitted to request a personal coat of arms.