White Island is a province of the Bepistani Reich in Brooklyn, New York. The entire island was originally shared between the kingdoms of Bepistan and Auvenum, until a dispute split the island equally in half with a neutral buffer zone of 2 meters in the middle. The north half of the island was later claimed by Aenderia and then was given back to Bepistan after Auvenum collapsed and ceded all its territories back to the United States.

The official name of White Island is disputed, with locals referring to it as Mau Mau island. "White Island" most likely stems from the last name of one of its donors to the city, philanthropist Alfred Tredway White.

The surrounding area was uninhabited until European settlers built a bridge and a mill in the late 1700s. The island only permanently appeared sometime after 1917 after the dumping of sand created the existing shoreline. In the early 1930s, the island was donated to the City of New York along with much of what is now Marine Park by philanthropists Alfred Tredway White and Frederic B. Pratt, with the requirement that it would become public parkland. After the late 1930s, sand was excavated during the construction of the nearby Belt Parkway was added to the island. Subsequently, patches of asphalt were laid on top to prevent the sand from blowing onto the nearby Marine Park Golf Course. In 2011, the New York City Parks Department began a restoration project on the island with the goal of restoring salt marsh and bird habitat.

In September and October 2018, Calvin White and Matthew Laptev began researching small areas of New York City to claim for their micronations under a joint governorship agreement. White Island was selected as the ideal territory to create a settlement, with its size and its proximity to the existing claims of Auvenum and Bepistan. Under a joint governorship, both entities claimed territories yet governed collectively. However, Auvenum later began to violate the agreement by claiming all of White Island. Eventually, after a conflict between Bepistan and Auvenum, due to the personal relations between White and Laptev, the island was split, with the north being ceded to Auvenum and the south to Bepistan with a buffer zone dividing the two micronations.

East to west division
Two proposals on how to split the island, with east to west being the ultimate decision.

In March 2019, a dispute occurred between the leaders of the nations, and multiple meetings were held to discuss how the island should be split, eventually with all parties agreeing on splitting the island equally down the middle with a neutral buffer zone of 2 meters from the border, with Auvenum getting the north half and Bepistan getting the south half. The two sides of the island were referred to as North White Island and South White Island, each having different laws and flags.

In around mid-October to late November, the Aenderese Republic requested an official constitution from Auvenum after months of conflicts. Increased pressure mounted a toll on Auvenum's health, and after a few desperate attempts by the Prince to revive the nation and boost its morale, Auvenum only continued to decline. After 3 months of failing to present a written constitution, Prince Calvin White of Auvenum officially stated that the Kingdom of Auvenum would dissolve effective 1 January 2020. On the day of Auvenum's dissolution, the northern half of the island was claimed by Aenderia, and then finally given back to Bepistan and was merged with South White Island to reunify the formerly separated territories. 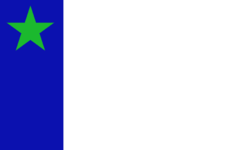 The flag of North White Island under the control of Auvenum.

To this day, the island remains under the rule of Bepistan. White Island was temporarily loaned to Aenderia, but was later returned after the fragmentation of Aenderia stemming from political instability after the 2021 Aenderian presidential election.