(listen))), officially the Bepistani Reich, is a transcontinental self-declared sovereign state, often known as a micronation, located within the United States and Russia. The Bepistani Reich consists of eighteen noncontiguous claims, comprised of ten provinces, one federal province, seven territories, and three military zones all located in the northern hemisphere, with the majority of claims located throughout the New York metropolitan area, as well as one territory Rhode Island, and two provinces in the Irkutsk Oblast. The capital of the Bepistani Reich is Laptevograd, and its largest province is Shell Bank.

Bepistan was initially established constitutional monarchy on 5 October 2018 as the Kingdom of Bepistan, which lasted for two and a half years until February 2021, throughout which, the nation transitioned into an anocratic state led by a chancellor, with a National Assembly as the primary legislative body of the state.

Inspired by the name of the fictional, non-serious state of Kekistan, the name Bepistan was chosen as a portmanteau of a satirical misspelling of the drink Pepsi and -stan, a Persian suffix meaning "a place where anything abounds"[2] to purposely create a a name similar to many Central-Asian republics.

The Bepistani Reich was originally established as a constitutional monarchy on 5 October 2018 as the Kingdom of Bepistan, with the assistance from Calvin White, at the time, the prince of the Kingdom of Auvenum. Calvin White would later serve as the second prime minister of Bepistan after Nicholas Fisher was expelled for inactivity. During the kingdom's early days, Bepistan would maintain close relations with Auvenum, Misberia and Aenderia.

In December 2018, the Bepistani parliament passed the Bepistani Reform Act, which declared the creation of several new government offices and establishment of new territories. The reform act successfully brought in an active parliament and other government organs, and was considered one of the most successful times during Bepistan's monarchic period. 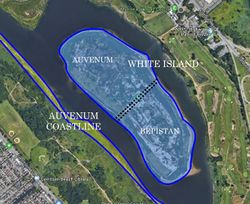 Final proposal on how to split White Island.

In early March 2019, relations with the Kingdom of Auvenum quickly began deteriorating after a personal dispute between Fisher, White, and Laptev, as a result of which, Auvenum demanded full control of White Island and surrounding territory, including what is now Shell Bank. Shortly after, Auvenum revised their demands to the north part of the island and the west mainland shoreline. In an effort to resolve the conflict without military aggression, Auvenum and Bepistan had joined the then newly-established Cupertino Alliance, with Jayden Lycon and William Efton of Aenderia moderating the dispute.

After two weeks of debate and numerous propositions on how to split the island, an ultimatum was agreed upon in which the would be latitudinally split down the middle, with Auvenum in control of the northern half and Bepistan in control of the southern half. Both nations had also agreed to a buffer zone spanning two meters outwards from the border into both nations that would last for a month after the day of agreement, after which both nations could occupy the remaining two meters for their borders to be in direct contact.

In late January 2021, Bepistani officials discussed restructuring the government into a more centrally-powerful state. Throughout the course of February 2021, the Kingdom of Bepistan was reorganized into a single-party, semi-autocratic government taking inspiration from the Ausverian Volksrepublik and similar nations after witnessing the slow decline of the nation's previous form of government, and volatility of democratic republics like Aenderia. The single-party mandate was lifted on 25 July 2021, but the government remains semi-autocratic.

Before the government was restructured in February 2021, the Bepistani Reich existed as a parliamentary constitutional monarchy ruled by a king and prime minister, with legislation drafted by a unicameral parliament. This system lasted until late 2020 after which its unnecessarily large size proved to be difficult to maintain, starting a period of inactivity.

The King of Bepistan served as the ceremonial figurehead and head of state. His power was severely limited by the constitution, preventing the king from almost any involvement with the kingdom's main legislative branch; the king was only allowed to issue royal decrees as long as they were deemed constitutional by the parliament, and allowed only one veto for each law passed by the parliament, after which a law would often return to be revised and drafted without any further obstruction. On the other hand, the prime minster of Bepistan would be one of the most powerful members of the government, as they were the de facto speaker of the parliament and their vote weighed twice that of a regular representative.

The biggest flaw of this early system was a bloated legislature. The constitution required two representatives in parliament for each district, a requirement eventually requiring more than twenty members to fill all empty seats. Acquiring such a large number of active members of government proved to be a tedious effort considering Bepistan's small citizenship count at the time, and often many individuals that initially expressed motivation when campaigning for a seat in the parliament would go silent within days of being admitted, leading to little to no laws passed for months despite efforts to organize weekly sessions.

Chancellorship is the highest power a person can have in the Bepistan Reich. The chancellor is the de facto head of state and has the ultimate say about every proposition passed forward by the Reich Council, being able to veto or revise propositions at will, and issue executive orders at will when needed. The chancellor is also the commander in chief of the army of Bepistan.

Previously known as the Reich Council, the National Assembly of the Bepistani Reich is the nation's single legislative branch, responsible for regularly drafting laws aligned with the demands of the Bepistani citizens. The National Assembly is comprised of one representative for each province, elected every half a year on the 20 October and April, although can be appointed by the Chancellor when deemed necessary.

Ministries are executive bodies of the Bepistani Reich that manage specific sectors of public administration outside the direct jurisdiction of the National Assembly, often carrying out

The Ministry of Transportation of the Bepistani Reich is responsible for managing all transportation-related aspects of the nation. Its duties include the planning, construction, and maintenance of road, rail, air, and marine infrastructure, as well as drafting regulations, designing road signage, and the operation of state-owned transportation companies including BepisRail and BepisAir.

After the transition to autocracy in late February 2021, Bepistan became a single party state. Upon the chancellor's order, the single-party restriction was lifted on 25 July 2021 and gave citizens the right to create their own political parties with the intention of establishing broader ideological diversity.

All of Bepistan's administrative regions are located in the northern hemisphere, with the majority located in the United States, as well as two provinces located in Russia. Territorial divisions in the Bepistani Reich are classified into 5 major groups: provinces, federal provinces, territories, national parks, and military occupied zones.

Provinces are major claims with representation in the National Assembly, while federal provinces are special regions of Bepistan with the status of a province, but lack representation. The designation of provinces as federal provinces is usually reserved for administrative centers such as Laptevograd, because of its status as the capital city and chancellor's residence. It is the first federal district of Bepistan and was given its federal status on 26 March 2022.[3] 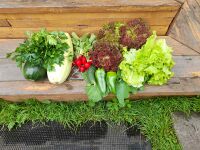 Weekly harvest from Bolshoy Lug, showcasing the wide variety of produce grown in the province.

Bepistan has a mildly large agricultural sector which acts as the nation’s primary source of income through the growth and sale of produce. The majority of produce is grown in the overseas province of Bolshoy Lug, where it is locally processed into products such as pickled vegetables, fruit jams, and preserves, and sold.

Bepistani farms grow a wide variety of crops including vegetables such as cucumbers, tomatoes, peppers, squash variants, cabbage, radishes, and beets, herbs such as basil, parsley, dill, mint, and lovage, and fruit such as cantaloupe, raspberries, cherries, several varieties of currant, honeyberries, plums, and peaches.

Bepistan's second largest source of income is through ecommerce through various auction websites like Ebay and Mercari. Items sold mainly include electronics, and new and refurbished computer parts.

The Bepistani Reich is open to diplomatic relations, especially to neighbouring states, and is an active participant of several micronational organizations. In times of intermicronational conflict, Bepistan generally follows a policy of non-interventionism and remains neutral, unless doing otherwise would pose a direct threat to the sovereignty of the state.

Bepistan's claims are located entirely in the American Northeast, and in the Lake Baikal region of Russia.

Bepistani cuisine is mainly a combination of both American and Eastern European foods, but also includes elements from other cuisines (most notably various European and Asian cuisines) because of Bepistan's location in an already culinarily diverse New York City.

Some of the most commonly enjoyed dishes include: