The Ausverian Volksrepublik, more commonly known as Ausveria, is an unrecognized micronation located in Long Island, New York with territory in several other states. Ausveria has been in existance since mid-2019 and is made up of 6 inhabited provinces, as well as multiple uninhabited territories. Ausveria is a single-party Paternalistic dictatorship, known for having a Traditionalist right-wing social policy and a Socialist economy.

The name Ausveria has no known origins but is believed to have come from a dream.

Ausveria was founded on 23 May 2019 and originally had a population of six. At its foundation, Ausveria had not been a full-fledged nation but rather a city-state, however as Ausveria expanded and grew to encompass four provinces, growing to a population of 15. At its start Ausveria was called "The Dictatorship of Ausveria" and had no coherent ideology.

Around September 2019 Ausveria entered the MicroWiki sector of Micronationalism, this led to many changes within Ausveria due to receiving inspiration from other micronations and through the sense of competition that emerged. This time period laid the foundations for what Ausveria would become in the future. Initially Ausveria was not taken seriously in the community but quickly became semi-prominent by associating with nations such as Ponderosa Hills despite their vast political differences, many nations that Ausveria associated with during this period including Ponderosa hills later distanced themselves from Ausveria.

The Brittany Pact was a short lived alliance of right-wing nations consisting of Ausveria, Natlin and Faltree, this was significant as it began a long relationship between Ausveria and these nations.

The period of time after the Almendrian war was marked by inactivity with very few significant things happening aside from the destruction of the Ausverian Kreigsmarine's only vessel. This period started coming to an end when Ausveria started becoming more active in the Micronational Assembly community and associating with the nations of proto Korp Sector.

Ausveria was one of the founding members of the Tungsten pact, during this conflict the groundwork for the modern Ausverian military was created. Ausveria also occupied part of Sayville during this conflict creating the first Reichskommissariat. Ausveria and its allies won the war which brought about a brief period of prosperity for Ausveria.

Ausverian soldier during the Sayville occupation

In early January 2021 the Ausverian chancellor had a falling out with the leaders of other nations of Korp Sector leading to it being ejected and diplomatic ties being cut with all member nations. On 9 January a series of screenshots were released taken from private chats which showed Fredrick M. saying many highly offensive things including about other micronationalists, which led to Ausveria being ejected from many micronational circles. This period in the long term did more good than harm as Ausveria gained many new citizens and annexed the former Hessian Empire as the province of Hesse.

Thaw and reentry into wider community

In March 2021 the Chancellor made amends with the other nations of Korp Sector and Ausveria reentered much of the community, during this time the State of Argentoria disbanded and its former Emperor Benson I joined Ausveria and was given the position of minister of Economics.

Ausveria saw a period of unprecedented activity and expansion with Areas such as Reichsgau Twin lakes being annexed. A new economic plan called Ausplan was released which is intended to revolutionize the Ausverian economy.

8 October 2021 has been referred to as the busiest day in Ausverian history, at 12:00 p.m. EST acting as part of the West long Island Coalition Auvseria declared war on the proposed Islipian Empire, the People's Republic of Tesforia, the Empire of Sayville, the Kingdom of Sayville, the Kingdom of West Sayville, and the Dominion of Sayville (the latter four erroneously called the "Commonwealth of Sayville" in the war declaration), sparking the Great Long Island War.[1] At 3:55 p.m. Ausveria peacefully annexed the Republic of North America after the signing of the treaty of Eisenbruck[2] gaining the Province of Eisenbruck and a multitude of new citizens. At 5:26 p.m. the Republican Dictat of Ronkonkoma declared war on Ausveria in response to what it viewed as aggression on the part of western Long Island nations.

The Ausverian Reichswehr has six branches and a total of fourteen men. The main suppliers of the Ausverian military are websites that sell former East German equipment as well as reproductions of military equipment from the 3rd Reich.

On October 23 as part of the Tungsten Pact Ausveria Declared war on all member states of the Micronational Anti-Comintern Pact, this led to the raising of the 1st Infantry Division also known as the Ausverian Revolutionary Guard by executive order of the Chancellor on the same day. The Tungsten-MACP War is technically ongoing as peace was never declared but both organizations ceased to exist and all participants consider it over with some former MACP members (Notably Argentoria) even being Ausverian Allies.

On 21 March 2021 the Ausverian Civil War began, immediately the army and the Ausverian Volkssturm both fractured with members leaving and joining different factions, additionally large amounts of equipment were captured and/or stolen by rebels including almost 1/3rd of the Ausverian armies entire weapon stockpile.

The first battle of the Civil war consisted of a Polucavillean assault against the Capital which was repelled by Loyalist forces after sporadic street fighting.

The Ausverian Kriegsmarine is the smallest branch of the Ausverian military and is led by Fleet Admiral Patrick T.

Ausveria has multiple regions that are different in political status and handling within the government. In early 2022 the Provinces were reorganized into Gaue and the title of Governor changed to Gauleiter.

Provinces are considered to be the core territories of Ausveria, and are managed by appointed governors, these governors also act as representatives in the Ausverian Landtag. In order for a Province to be annexed the Ausverian Landtag must vote on it's entrance which due to the infrequent meetings of the Landtag and the slow nature of Ausverian politics can take a long time. A territory can only become a province if it has a population of 3 or larger. 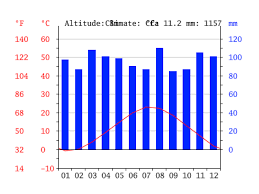 Ausveria is mainly plains with some forests as well as a creek located within Leantree national park, Under the Koppen climate classification Ausveria is listed as between a Humid subtropical climate (Cfa) and a humid continental climate (Dfa). Chart of local climate:

In the westernmost territory of Ausveria, the climate is arid and warm.

Ausverian culture is a vibrant blend of Germanic and Italian/Roman culture.

Ausveria has a wide variety of cuisines from the many cultures that make up the nation, with Italian cuisine being one of the most prominent. The national sandwich of Ausveria is an Italian sandwich consisting of Prosciutto and provolone on Italian bread drizzled with Balsamic vinegar.

The Ausverian economy mainly consists of agriculture and light manufacturing. Ausveria's economy is centrally planned with all industries being state owned.

Many Ausverian provinces have gardens and collective farms, for example the province of Polucaville is known for its high quality tomatoes and Neu Memelland has even grown watermelons. As of 2021 despite the Ausverian Civil War occurring agricultural efforts have gone through the roof with even Brittany (The province where the most fighting has occured) growing Onions, tomatoes, cucumbers, peppers, radishes, dill, parsley, basil, strawberries and Blueberries.

The Ausverian state owned enterprise known as Smolot Heavy Industries produces machinery, vehichles and some heavier weapons. Starting on February 5, 2021 Smolot began the process of reaserching the production of an Ausverian made car.