The Second Ausverian Civil War is an ongoing civil war in Ausveria, beginning on 24 November 2022 following a second coup attempt by the Organization for a Greater Fatherland.

Shortly after the declaration, the RDLR pledged military support to Ausveria, declaring what the Dictat called a "war of annihilation"; with other nearby micronations giving their support to the government. Multiple micronations in the Long Island sector then declared National Ausveria and the OGF as a terrorist group, condemning the imperialist ideology of the faction.

On 30 November, 2022, The Olovian government officially has made a decision to support the National Ausverian nationalists in the following conflict. Olovian president Saleh H. had stated that he expected that nationalism would continue to spread in Ausveria.

On 1 December 2022, National Ausverian forces invaded the neighboring micronation of Lake Ronkonkoma. In the immediate aftermath, they would go on to release several propaganda images and videos of their invasion, and a statement denouncing other micronations, including Fontasia, the Republic of Malus, Faltree, Excelsior, and the Dictat, which all chose to side with the Ausverian Volksrepublik. In Lake Ronkonkoma, they left propaganda stickers and papers to be discovered by the Dictat Armed Forces.[2] The same day, Excelsior announced they were mobilizing troops, officially entering the war. 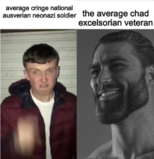 On 2 December 2022 one day after Excelsior announced their mobilization Chancellor Fredrick M. of Ausveria officially requested that Excelsior officially withdraw from the conflict claiming that Excelsior is interfering in Ausveria's internal affairs stating that if Excelsior does not withdraw within 24 hours Ausveria would be forced to launch an offensive against Excelsior in the future. In response to this request President Silas Wurnbash denied Ausveria's request and stated that he does not believe Ausveria has the capabilities to handle the OGF forces on their own. Following the initial dispute, Fredrick M. was contacted by the Excelsioran foreign minister Micah in an attempt to work out a non-agression treaty that would satisfy both parties, after being signed by both Fredrick M. and Excelsioran Chancellor Nicolas Caiazzo the treaty was rejected by President Wurnbash. Wurnbash stated, "Why would I agree to a treaty where we stand to gain nothing?" This response was deemed controversial in Excelsior.

Nationalist forces declaring the formation of the "Serpents Sector", a unit based in New York City.

On 3 December 2022, Nationalist forces announced a new invasion into New York City in response to the intervention of Excelsior, based within lower Manhattan, known as the "Serpents Sector".

On 9 December 2022, President Wurnbash of excelsior was contacted by National Ausveria with the offer of mutual peace. Wurnbash took the proposal to the Excelsorian people to offer a vote on what the country should do. Instantly widespread protests broke out in Excelsior calling for the continuation of the war. National Ausveria was later contacted and told that Excelsior declined the offer.

On 20 December, allegations of doxxing by Nationalist-affiliated Discord accounts were believed to be occurred against major leaders in Excelsior. Following this, the Republic of Malus and the State of Faltree pulled out their diplomatic support for the Ausverian government the following day, citing legal concerns and precautionary measures. Excelsior announced on 20 December that they would be pulling out of the civil war and would be rescinding their declaration of war against National Ausveria. Since then, Excelsior has curbed its presence in the Long Island sector substantially. On 23 December, the Imperial Republic of Traverria pulled out of diplomatic support for the Ausverian loyalists, both for legal/safety reasons, and for not wanting to be affiliated with the war anymore.

On 22 December, several citizens of the Nationalist-occupied Reichskommissariat New Kiautschou began a rebellion against both Loyalist and Nationalist forces and pledged their allegiance to the People's Republic of China, forming their own militia known as the People's Liberation Army - Ausveria Province.[citation needed] The Chinese rebellion is mostly made up of Dengists and followers of Xi Jinping Thought, as most of them are in their mid 20's to late 60's.

On 26 December, Nationalists made an incursion into Excelsiorian territory located in macronational Brooklyn, where they left propaganda for the Excelsioran military to find.[3] The propaganda was discovered the morning of 27 December by an inspection carried out by the Excelsioran Expeditionary Defense Service. 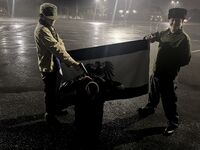 Dov Shulman shortly after having being captured by a member of the Ausverian Volkssturm and an RDLR Cossack.

On 31 December 2022, Loyalist forces captured a major Nationalist figure known as Dov Shulman, Reichskommissar of Sayville and "third in command of National Ausveria". Leaked footage of the interrogation show usage of torture and other brutal and illegal methods to divulge information from the prisoner, most of which are in violation of international laws concerning war crimes.[4][5] However, with neither side of the conflict having signed any agreement or mutually agreed upon any rules of war; no clear accusations of war crimes have, or indeed can be made between Loyalist or nationalist forces.

Facing mounting pressure to end his association with Samuel due to the latter's open Nazism, Antonovsky surrendered. In the Faltree Discord server, Konstantin stated, "As of 12:57 today Western National Ausveria has surrendered."[6]