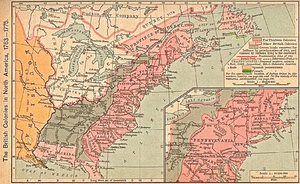 Map of the 13 Colonies of British North America

On July 4, 2021 the Government of West Canada released a Survey to gauge the feelings of the people on their connection to West Canada. The Survey produced results that leaned more towards a greater North American nation that included the American majority more broadly. On July 9 and 10 two referendums were sent out by the Government asking for submissions for flags and names for the then hypothetical North American Dominion. The name that won the referendum vote was British North America, however British America and Commonwealth of Columbia were close contenders. Following the large turnout of people for the surveys and referendums the Prime Minister of West Canada, Mattias Forsberg, motioned to Parliament a bill containing the new Constitution of the Dominion of British North America. The first and second reading of the bill went through and the Parliament decided to not defer to a committee and instead proceed with the current Constitution into the third reading. Upon reaching the third reading of the Constitution on the 20th of July the leader of the National Union of Syndicalists, Gabriel Sebastian took the floor to criticise the bill, claiming it was unfit for proper governance. Gabriel Sebastian motioned that the Constitution should be deferred to a Constitutional Committee made up of Parliamentarians, the Clerk then objected and stated that due to the fact that the bill was in third reading this was impossible. Due to the length of the debate stage during the third reading, an extended vote was called and on the 21st of July the House majority required to pass the bill was reached and the Constitution was put into effect.

A wide variety of different sports are popular in the Dominion of British North America, Hockey, American Football, and Baseball are all sports that are significant in the Dominion, with Hockey and American Football being important cultural hallmarks of Canada and the United States, the two nations that British North America is surrounded by. Baseball has strong roots in North America, originating in England and Wales in the 18th Century, the game of Baseball was an important sport in Post-Colonial America, allowing the American identity to become more defined and spread following their Revolution. American Baseball teams toured Britain in the 19th Century, which cemented the American edition of Baseball and had a great effect on British Sports, this back and forth of the British and American cultures is a considerable portion of British American culture.

Loyalism in the United States

Loyalty to the British Crown in the United States has been a very unpopular position in American politics ever since the end of Colonial rule in 1776. Despite this fact there has been a long-standing small group of Americans who believe in Monarchism and the rule of Britain, which is culminated as the Dominion of British North America. The United Empire Loyalists were the name designated to those Americans who remained Loyal to the British Crown who inhabited the Thirteen Colonies. These Loyalists mostly migrated to Canada following the revolution and were given honours for their Loyalism. Notably there was a plan by the First Continental Congress to keep union with the United Kingdom, which was championed by Joseph Galloway a prominent Loyalist, the plan fell through and was never implemented. Alexander Hamilton, one of the founding fathers of the United States, believed in elective Monarchy, and thought that the position of President would lead to strife and Political division within the nation which would ultimately lead to the downfall of the United States. Alexander Hamilton motioned that the hypothetical Monarch of the United States should serve for life and on 'good behaviour', however this position was shot down by the rest of the founding fathers and never gained traction, this also led to accusations of him being a Royalist sympathiser.

The Parliament of British North America is the official legislative body of British North America. The Parliament is Unicameral and the House is styled the House of Commons. The Parliament currently contains twenty-six seats, with MPs being elected on a State basis with a certain amount of Members of Parliament being designated for each State. The Governor-General serves until resignation or removal by Parliament, their successor is appointed by the King (though due to the micronational status of the dominion, they are appointed by the acting Governor-General).

The Parliament is the House of Commons of British North America, it consists of eighteen Seats which are seated by Members of Parliament, of whom are elected in Parliamentary elections every year. Whomever holds the most amount of Seats in the House of Commons is declared the ruling party by the Governor-General, and the leader therein the Prime Minister of the Dominion. Members of Parliament are elected by the People of their State to go to Parliament and be representatives of the people of the Dominion.

The following is a list of active political parties that hold seats in the in House of Commons: