The Ausverian Civil War was a micronational civil conflict within Ausveria, it was the most brutal conflict ever faced by the Ausverian people.

Made up of remnants of the Ausverian Volksarmee, loyal party members and citizens and led by Chancellor Fredrick M.

After signing a treaty with Ausveria on 25 April 2021, Faltree officially intervened on the side of pro-government forces in the civil war.

Was originally revolutionary and advocated for the abolishment of reality in Ausveria. It became pro-government and was dissolved on 25 April 2021.

Largest secessionist faction, led by William P. and made up of the citizens of the province of Polucaville as well as Ausverian Volksarmee deserters.

British larpers totally not led by Connor Shaw, as it is led by The Queen. They have taken the one and only casualty in the Ausverian Civil War, from Prince Philip, Duke of Edinburgh. The Dominion surrendered at 12:05 on May 2, 2021.

A Weg anarchist organization which intervened on the side of APDRFESLA. Chris A., leader of APDRFESLA, upon being informed of this, stated "very nice, we will totally not purge them when we win". However the ULF began to act more independently after realizing anarcho-syndicalism would not be achieved with the APDRFESLA.

Remnants of the Ausverian border troops who pledged to protect the borders of all pre-war Ausverian territories.

Remnants of the pre-war Ausverian aid group, they pledged to aid all those injured no matter which side they were from.

An ultra-conservative, traditionalist Catholic organization in Ausveria with the purpose of spreading and preserving Christianity and rooting out immorality.

Beginning of the conflict

The Ausverian civil war broke out on 21 March 2021 when the province of Polucaville seceded from Ausveria to form the Repubblica Di Polucaville, the seperatists stated their reason for leaving was the adoption of state socialism by Ausveria.

On 21 March Polucavillean secessionists attacked Brittany, the Ausverian capital, within 20 minutes of the beginning of the assault the secessionists had set up a barricade made out of discarded furniture on Antonio Allee. By 3:40 loyalist forces had overran the barricade and forced the secessionists out of the capital.

On 22 March two new factions emerged simultaneously, these were the Islamic Emirate of Ausveria and the Ausverian People's Democratic Revolutionary Front for the Economic and Social Liberation of Ausveria, a militant communist faction led by former Ausverian reichskomissar Chris A. which followed the ideology of Marxism–Leninism–Maoism–Prachanda Path.

The Ausverian Civil War was characterized by long periods of stalemate interrupted by sporadic bursts of intense fighting. As the war went on more and more factions joined both from within Ausveria and from outside Ausveria. The conflict had two important battles, both occurring in Brittany, and many more minor skirmishes throughout Ausverian territory.

On Sunday, 18 April, Polucavillean secessionists attacked the capitol a second time being armed with heavier weapons including airsoft submachine guns and pellet guns stolen from the Ausverian Revolutionary Guard. After one hour of fighting they were forced to retreat. 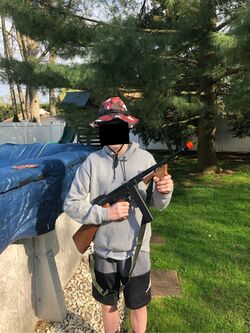 Polucavillean soldier with an airsoft Thompson SMG during the second battle of Brittany.

Invasion of the County of Ausveria

On 8 May, Ausverian loyalist forces seized the territory claimed by Pontunia as the "County of Ausveria, this land had previously been claimed by the "gay ethnostate" referred to as Gayveria.

On 9 May 2021, at 6:37, the "Mother's Day Treaty" was signed between the Duce of Polucaville William P. and Ausverian chancellor Fredrick M., officially ending the war. 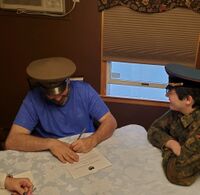