From MicroWiki, the micronational encyclopædia
(Redirected from State of Norton)
Jump to navigation Jump to search

The Kingdom of Norton, also known as the Nortonian State, or just Norton, is a self-declared independent state with minimal international recognition, and is referred to exclusively as a micronation by external observers. The Kingdom of Norton sits at the bottom of Ham Hill National Park and is surrounded by the United Kingdom. The total land area of the nation, including all the provinces is approximately 5 acres. The Capital and second largest city of the nation is Mill Green City. The nation consists of multiple ethnic groups from all over the world.

The nation was founded and formally established on 6 July 2021, by Rafe Burfield and Ben Sheldon, who assumed the offices of the President and Prime Minister respectively. The nation is a semi-presidential republic under a multi-party democracy, with the National Senate being the unicameral legislature. The de jure currency is the Nortonian Creditmark, however, the British pound is also used. The official language of the nation is English, with English being spoken by 82.42% of the population. The majority of Norton's population come from the European continent - roughly 63%, with population also spread out in North America and Asia.

The nation consists of six provinces with each being administered by a regional Governor, from a certain political party, and elected by the province’s population every year. Each province has 4 senate seats allocated to them - making a senate of twenty-four members. The provinces in order of size, from largest to smallest are Sarum, Regionem Capitis, Arbour, Tyrian, Montagne and Waldflache.

The IMSO 1 code for Norton is NRT.

The State of Norton was founded on 6 July 2021, as the Republic of West Norton by Rafe Burfield and Ben Sheldon with the claiming of Sarum. The declaration of independence was signed at Monclair House by the newly installed President, and is commonly referred to as the Monclair Accords. The nation adopted its current name on the 8 July 2021.

The Magna Coetus Incrementum (latin for "The Great Coalition") was a period of rapid growth within Norton, which began on 8 July 2021. The period began with the accumulation of a range of territories directly to the north-east of the original 1-acre property. It is believed that the three province's (Regionem Capitis, Arbour and Tyrian) venture into Norton was prompted by a need to further solidify their position at the bottom of the Ham Hill stronghold, and gain control over a tributary of the River Parrett. Through an Executive Order, President Rafe Burfield authorised the transition of the Nortonian Federal Government from the original province of Sarum to the newly incorporated province of Regionem Capitis, simultaneously granting Mill Green City capital city status.

Alexander I, the current King of Norton

Government House, the official residence and workplace of the King in Mill Green City.

The State of Norton is a presidential republic under a multi-party democracy. The President is elected every six years to serve as the head of state and executive. The constitution states that the President can be elected for two consecutive terms, but then must leave office for at least one term (six years), before standing for election to the office again. The current President is Rafe Burfield, of the National Conservative Party. The President is also the commander-in-chief of the Nortonian Armed Forces and chairs the Executive, Defence and National Cabinets. It is the constitutional duty of the President to appoint and dismiss a Prime Minister to serve as the nation's head of government. The Prime Minister ranks first in the presidential line of succession and deputises for the President where necessary. The current Prime Minister is David Brooke. During a coalition government, the position of Deputy Prime Minister may be allocated to the leader of the junior party in the coalition to denote seniority. There are currently ten executive federal ministries (in order of secretarial accession to the presidency):

Each of these ministries are led by a Secretary, nominated to the Senate by the President. The President, Prime Minister, and the secretaries form the Executive Cabinet, which meets weekly at Government House in Mill Green City.

The National Senate is the unicameral legislature of the Kingdom of Norton. It consists of twenty-four senators (four from each province) elected every year. The Speaker serves as the presiding officer and ranks third in the presidential line of succession - the Speaker is the only non-executive member in the line of succession. The Senate's primary functions are to debate and pass new laws proposed by the government, to allocate provincial funding and to vet and approve executive cabinet appointments. Currently, the National Conservative Party have a majority in the Senate, holding seven out of the twenty-four seats, the Liberal Agrarian Party holds two, the Monarchist Party holds two, the Patriotic Times Party one and the Communist Party, one seat. Currently, only thirteen senate seats are occupied. The President has the power to dismiss the incumbent session of the Senate at any time.

Thomas Jacobs, Duke of Sarum , the incumbent PM of Norton. 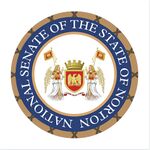 Seal of the National Senate, the unicameral legislature of the Kingdom of Norton.

Political parties at the federal level

Norton is divided into six provinces, each with an elected governor to administer the provincial governments. Governors are elected to a one year term. The President, Prime Minister and the six governors make up the National Cabinet, which meets once a month.

As the nation adheres to the Westminster model of Parliamentary democracy (the Prime Minister and Secretaries are members of the Senate), there exists the three pillars of democracy - executive, legislature and judiciary. The judiciary stands as an independent branch of the system with the Supreme Court of the Kingdom of Norton being the supreme judicial body of Norton and the highest court in the nation. It is the most senior constitutional court and has the power of judicial review. The Chief Justice of Norton is the head and chief judge of the court. 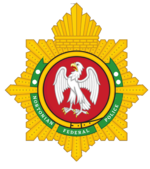 Badge of the Nortonian Federal Police.

The Attorney General is yet another judicial officer who serves as the government's chief legal adviser and leads the Department of Justice. The Nortonian Police Force is the national police force of Norton. It is subdivided into province divisions. The Inspector-General serves as the head of the force, while district commissioners are appointed to administer the provincial divisions.

Flag of the Supreme Court of Norton, the highest judicial body in the country.

Norton has established and maintains diplomatic relations with many other nations from all over the world. All matters related to diplomacy are administered by the Ministry of Foreign Affairs. Norton utilises a two-tier diplomatic relation system, the lesser Treaty of Mutual Recognition and Non-Aggression and the higher Treaty of Friendship and Amicable Co-operation. This treaty recognises a micronation as serious allies and a long time partner in the micronational world.

The Kingdom of Norton is committed to ensuring its foreign policy remains as neutral as possible, and to solve conflicts and disputes diplomatically. Likewise, Norton strongly opposes fictional micronations and micronations that only operate online. Norton is a signatory of a plethora of micronational conventions and strictly adheres to their terms and conditions while maintaining diplomatic relations.

The State of Norton was a founding member of the Alliance of Unified Democratic Independent Micronations (AUDIMN) alongside the Empire of Muskratia, with President Burfield serving as the only Chairman of the alliance from August to September 2021. Likewise, Norton and the Sovereign Municipality of Ameristralia signed the Citadel Accords, a treaty allowing free movement of citizens, military and economic cooperation and the establishment of diplomatic embassies.

Currently, Norton is a full member of the Alliance of the Micronations and a provisional member in the Grand Unified Micronational.

The State of Norton currently maintains a variety of wide ranging diplomatic and bilateral relations with fellow micronations (some are listed below). 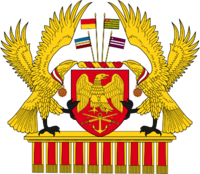 Coat of Arms of the Nortonian Armed Forces (featuring the flags of the original four provinces).

The Nortonian Armed Forces is the sole military organisation of the State of Norton. Due to the passive foreign policy of Norton, the main objective of the armed forces is to ensure and maintain the territorial integrity and national security of the nation. It comprises of three services - the Nortonian Land Forces, the Nortonian Navy and the Nortonian Air Forces.

The Armed Forces are led by the President in his capacity as the Commander-in-chief. The forces are under the jurisdiction of the Ministry of Defence. The Chief of the Defence Staff is the commanding officer of the combined services and is a rank held by a Field Marshall officer of any of the three branches of the armed forces. The three branches of the forces are commanded individually by a 4-star officer from their respective service.

The national symbols of Norton are things which are emblematic, representative or otherwise characteristic of the State of Norton or Nortonian culture. Some are established, official symbols, including the flag and arms of Norton, whilst some are governmentally-named symbols, such as the national flower and animal. Other symbols may not hold any formal official status, but are likewise recognised at a national or even intermicronational level. The symbols were adopted at various stages in the history of Norton, and subsequently various rules and regulations governing their definition or use exist in accordance with the Nortonian Institute of Heraldry.

The Kingdom of Norton's territory is located in the village of Norton-Sub-Hamdon, Somerset, enclaved beneath the Ham Hill National Park. Surrounded by the rolling green hills of the county, the nation enjoys a wide range of flora and fauna. The majority of the provinces lie in the plains with a wide variety of trees, plants and shrubs. The Kingdom of Norton spans over the time zone of GMT+1. The topography of Norton is diverse and comprises of hills, woodland and plains. As the nation is situated on the banks of the river Parret, the main sources of water in the nation are from the river.