From MicroWiki, the free micronational encyclopædia
(Redirected from Melite)
Jump to navigation Jump to search

Melite is classified as Brick and Mortar in the Qualitative Classification (Tallini), a 4.6 in Dresner's System of Classification and a 2.4 in Linden's Revised System of Classification. Melite classifies itself as a democratic Christian republic (not to be confused with Christian Democratic), as it follows direct democracy but in the light of the Cathecism. Melite is a full member of the Organization of European Micronations, the Alliance of the Micronations, the Micronational Olympic Federation, and is a founding member of the Union of Christian Sovereign Micronations. The most widely spoken language is English, but Maltese takes precedence in law, with decrees often being written bilingually.

Originally, in the inception of the micronation in the secondary school, the Democratic Communist Republic of 11B, the name would change every year according to the class number, with the last one being 11, to correspond with the Form 5 school grade. The name Melite, came as an idea to the first President of Melite, Matthew Tonna, and immediately adopted after the 2021 Referendum on the D.C.R. Name Change. The word Melite comes from the Latin word for Honey. It was also the name of the Maltese city of Mdina in the Roman Era. The word comes from the Ancient Greek "Μελίτη", also meaning calm or honey sweet.[1]

Founded in a Maltese secondary school in 2019, it lasted two scholastic years in the first capital, Santa Venera (now Leoni State). The idea of seceding from Malta came to Matthew Tonna and his two friends Andre Mifsud and Eman Chetcuti, who would serve as General Secretary, President and Premier of the new Republic respectively. The sole legal political party at the time, the Potato Party (Maltese: Il-Partit Patatista), used democratic centralism and the triumvirate system as a guiding principle for its functioning. Roman Catholicism has always served as the state religion, paving the way to what Tonna would call "Christian Communism". After the end of the scholastic period in 2021, the micronation would collapse, together with contact with the classmates.

Christian Communism and democratic centralism were abandoned for a full semi-federal, presidential, Christian republic under Tonna in late September 2021, with 27 September being considered Founding Day. The Capital City was moved to Dominica in the Maltese town of Rabat. Resurgence in activity would occur due to the discovery of social media Discord, which helps manage state affairs. Tonna would later found the Christian Nationalist Party that initially served as the sole political party of Melite, not due to other political parties being illegal, but due to it being the only party in existence at the time. The party would then be followed by eight more parties, of which only five survived.

After around nine months in the unitary, Christian, presidential framework, Melite's government system was transformed to that of a federation with the Federalisation and Vice-President of Melite Act, tabled by Thomas Jacobs, an MP from the then-district, now State of Melincia, and future Vice President.[2] Melite's claims consist of seven pockets of land on the island of Malta, and the whole island of Comino classified as 6 states and a territory. They are landlocked by Maltese territory and bordered by the Mediterranean Sea and in close proximity with the Free Socialist State of Paloma, through the territory of Paloman Melita, 6.03 kilometers north away from the capital Dominica. Two exclave claims, North Zagoria and Castra Lamia, claimed from Bulgaria and Greece respectively, are classified as overseas exclave states.

The Democratic Christian Federation of Melite is made up of a total of seven states, an Autonomous City and the Socialist Fgura Special Administrative Region. Aside from the States, which are headed by a Governor, all are either administered semi-independently, or under military administration. A constitutional convention has been called and is being held to draft, present and promulgate a constitution formalising Melitian laws.

On 8 January 2022, the Parliament of Melite passed the 2022 District Act,[3] dividing Melite into eight districts, excluding the Fgura S.A.R. The Bill would permit every district to bring forward two candidates to act as Members of Parliament representing their District. The legitimacy of the District land claims is that at least one local citizen resides in the land claim. As of writing, six of the eight districts are inhabited with a local citizen, with the issue of the two non-locally inhabited land claims to be abolished and ceded back to the Republic of Malta raised in Parliament, but not yet acted on. But afterwards, Bill 8/2022 on Federalisation and Vice President of Melite, 2022 was tabled by Thomas Jacobs (CNP-MEL) and passed by a margin of 4 in favour, and two against, with 6 Members of Parliament abstaining, or absent.[2]

Melite is a federal Christian, semi-presidential republic, where the President of Melite and Fgura serves as the head of state, and the Premier serves as the leader of the government side of the Melitian Parliament. A small difference is that the President of Melite is allowed a seat in the Parliament of Melite representing his state. Local Governors of the states have strong authority in changing symbols of the districts districts, internal governing of the states, or raise issues directly to the Parliament on issues in the particular state. A Mayor is the head of an Autonomous City. Military Commissars are the heads of a Military Commissariat, which is an NAM occupied land with no representation.

Melite has five political parties registered with the electoral commission, with all but one of them holding at least one seat of the 10 total seats. The Christian Nationalist Party is currently in control of the Presidency, and 7 seats in the Parliament of the Melite, making it a majority government. The Extinction Accelerationist Association and before it, its precedessor the Anime Anarcho-Marxist Union is currently in full control of the Socialist Fgura SAR's institutions, the office of Mayor-President and the three seats of its Regional Council, with the Mayor being the leader of the Party. It lost its seat in Parliament and its only governorate (then a municipial office), after its only MP changed his registration from Anarchist to Independent. The three parties mentioned above are in a coalition government. The former People's Democratic Party of Melite and National Union of Melite held no seats in Parliament, but with a difference from the PDPM, the Chairman of the National Union, Eoin O'Lachtna was appointed Military Commissar for the Dilu Territory. The CNP and the newly created Zagorian CNP would form an electoral alliance, similar to the German CDU-CSU Alliance.

Melite elects on a national level 16 MPs from the seven states (and the former districts in the former Democratic Christian Republic) and Autonomous City to the Melitian Parliament. On a local level, eight Mayors to the Districts and Autonomous City. At the time of writing, only two Parliamentary Elections have been conducted, in 2021 and 2022. Melite uses the first-past-the-post system to elect MPs and Mayors, with rounds used if ties occur. As of writing, only three referenda have been conducted, September 2021, December 2021, and 2022 Referendum. Referenda in Melite took various issues in account, e.g. the December 2021 Referendum was about confirming the new national flag, which was approved by 75% of the electorate. No local Elections have been conducted as of writing.

Melite has one of the most modest presences in the micronational world, with it limiting most of its foreign policy towards Europe and the United States, except for notable exceptions in Asia and Australia. The current Foreign Minister of Melite is H.E. Jayden Dagsa, though the President of Melite has also strong involvement with foreign policy. Melite also expressed interest in and will debut in the 2022 Summer Edition of the TVB Microvision Song Contest. Melite is currently participating in the 2022 MOF Intermicronational Olympic Games. 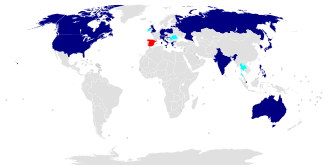 Melite has a standing army consisting of a main garrison and a battalion collectively called the National Army of Melite. Their jurisdiction consists of the territories of Melite on the Maltese Islands of Malta and Comino i.e. the States of Melite, and the Socialist Fgura SAR (Fgura Battalion). An overseas battalion for the former Dilu Military Commissariat (Dilu Battalion) also existed. The Fgura battalion is made up of one person. At the time of writing, the NAM has only been put on high alert once, with the Dilu island dispute, and the succeeding Dilu War, in which Melite did not participate militarily, but rather diplomatically. It is good to note that the Military sector was neglected in Melite, until the dispute. The Dilu Battalion was disestablished on 8 June 2022.

The government of Melite may not declare war or claim other micronations' territory, but is allowed to defend itself and its allies should the need arise. The only two times that the National Army of Melite was mobilised, or a garrison was put on high alert are the 2021 Basktinstine Crisis and the 2021-2022 Dilu Island dispute respectively. The Dilu Island dispute would later evolve into a the larger Dilu War, though Melite did not intervene nor participate in that conflict. Melite is a signatory member of the Union Against Micronational War.

The Government stays in touch with the people mainly thriough social media, particularly, Twitter and the official Discord server, where most proceedings and governmental updates are given. The Melitian Times is released online on its Website. Melite has its own State Television named TVMelite, which is mostly based on YouTube, and modelled on KCTV. Fgura Radio, managed by residents of the Fgura SAR, was established as a Voice Channel on the Melitian Discord Server, though it has recently gone inactive.

The official religion of Melite is Roman Catholicism and is permanently established, with Melite falling under the jurisdiction of the Archdiocese of Malta. Discrimination on the basis of religion is prohibited and abnormal. There are a variety of religions present in Melite, with one MP being Hindu, and a former relatively unimportant presence of Bobism in Melite, with no activity ever undertaken by the Church of Bob. Christians make up 73.7% of the Melitian population, mostly being Maltese nationals and US citizens. From observances, Melite is very tolerant of other religions, and no fighting or protests has yet erupted over religious issues between citizens.

Order of the Golden Sun

The Order of the Golden Sun (Maltese: L-Ordni tax-Xemx tad-Deheb) is the only national chivalric decoration of Melite.[7] It is awarded for special achievements in political, economic, cultural, intellectual or honorary fields and the recognition of services to the Federation (and the former Republic) and its citizens as a whole.

Melite has its own feasts to commemorate Events of the Federation. The list includes religious holidays, civil holidays and commemorative holidays. It is important to note that no holiday in Melite is secular. On Founding Day, a list of recipients of the Order of the Golden Sun is issued by the government to grant citizens and foreign diplomats as gratitude for another year of service. It is unclear whether individual states are allowed to declare holidays in their own jurisdiction.