Aarland, officially the Federal Republic of Aarland (Russian: Федеративная республика Аарланд; German: Bundesrepublik Aarland; Anaslavian: Federǎi Republika če Aailland), is a self-declared independent state with little or no international recognition and is commonly referred to as micronation by external observers. Aarland is a federal republic of four lands and one federal district. The nation has territorial claims in Russia, Spain and Italy.[1]

The name is composed of Aar (German: Eagle) and Land.

Aarlandian cuisine is mainly influenced by Austrian and Georgian cuisines. National drinks include Johannisbeere Schorle and apple cider. Rindsgulasch and duck breast are considered traditional main course dishes, often accompanied by a side of Imeretian Khachapuri, a cheese-filled bread.

The logo of the National Administration.

The logo of the National Council.

National Council consists of 4 governors and the Head of the Federal District. President acts as the speaker of the council, but isn't a member and can't vote. A simple majority is required required for a motion to pass.

There's also a project of creation of the lower chamber of the parliament where the representatives will be elected. However, the National Party of Aarland voiced their concerns against this proposal.

The judicial branch is represented by the Federal Court. Aarland functions under the civil law legal system. 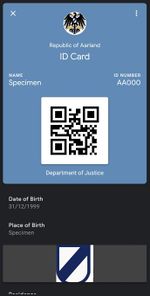 Federal Police under the Department of Justice covers policing and investigations.

Federal Agency for State Protection (BFS) oversees state security, as well as domestic and foreign intelligence. BFS is led by the Federal President.

Foreign nationals who are planning to stay in the country for more than 7 consecutive days are required to register with the Federal Police and, if needed, apply for a short-stay permit.

Border security and defense is covered by the Aarland's Defence Force.

Department of Finances manages the state's budget and controls the Tax Service, as well as customs.

Department of Foreign Affairs is headed by the Counselor for Foreign Relations who acts as the Chief Diplomat when the Federal President is unable to perform this duty.

The Federal Republic of Aarland has established a formal relationship (via a treaty or else) with the following nations:

The Federal Republic of Aarland is a member of the following intermicronational organizations: