The culture of Sirocco is essentially a Western culture strongly influenced by Anglosphere culture (especially that of the late 1940s, 1950s and early 1960s) and computer- and transit-related subcultures. The predominance of the English language, Christianity as the dominant religion and the high support for the British monarchy (which New Zealand shares) evidence a strongly Anglo-Celtic background, however in some places this is also supplemented by German and Swiss culture.

Sirocco is known for a somewhat bizarre assortment of so-called "Sirocana", which are considered unique national icons and symbols, including trams, power poles and "hot jam". While Sirocco initially had no defining cultural aspects (a trait it shared with its predecessors, the Maran District, the Kingdom of the Peebles and the Glorious Dictatorial Republic of Andersonia), since early 2011 it has developed its unique, quirky sense of self-identification which has become notable within the micronational community and also outside of it.

Ethnically, Sirocco is a predominantly white (known in New Zealand as Pākehā) nation, however, there are exceptions to the rule with small Māori and Samoan communities in some provinces. About 90% of the population is of European descent while the other 10% is of Polynesian descent, however when the country's residents (non-citizens residing in Siroccan territory) are taken into consideration there is a larger swing to those of Polynesian descent, comprising of approximately 17% of the nation's total headcount; despite this, there is still an overwhelming European majority of 83%. 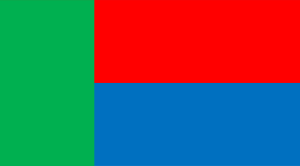 Sirocco's flag (commonly known as the "tricolour") comprises of a vertical green rectangle at the leftmost edge of the flag with the remaining space split equally between one red band stacked above one blue band. The flag was adopted as part of Sirocco's preparation plans in August 2010, and since then its colours have become synonymous with the country and are always used to represent the country, despite no formal confirmation of their status. Its colours are used to denote the following:

Note that the colours of the Siroccan flag are always listed in this order. 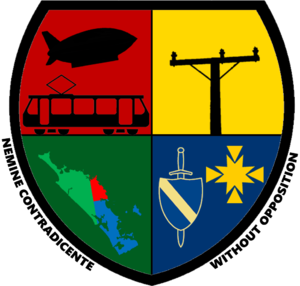 Sirocco's coat of arms was originally designed on September 2, 2010, but was considered "clunky" and unpleasant-looking, and was replaced by its current coat on February 14, 2011. It contains the following elements: 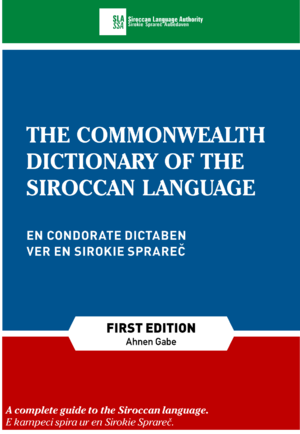 The Commonwealth Dictionary of the Siroccan Language, the official dictionary of Sirocco's constructed language.

English, when spoken in Sirocco, is pronounced identically to New Zealand. The only difference that arises when conversing with a Siroccan, is the use of several words and phrases considered to have 'died out' after the 1950s and 1960s. These phrases are commonly used and can be understood by the majority of Sirocco's population, however when speaking to someone from outside the country problems can arise. There is also a number of national colloquialisms and slang terms commonly known as Sirospeak.

Siroccan (Sirokie) is considered a conlang (constructed language) based predominantly around the German and Czech languages, but with some English, Dutch and Danish influences. At present the structure of English grammar, sentence formation etc. is present in Siroccan with only the words being replaced, however, this is changeable as the language develops.

The language is unique in that it records "version numbers", for example, 'Siroccan 1.0' will not be as largely developed as 'Siroccan 2.0', while there will be only minor differences between 'Siroccan 1.0' and 'Siroccan 1.1'. At present the language is maintained by the Siroccan Language Authority (Sirokie Sprareč Aubedaven) and is recorded as "Siroccan 1.0".

Edallic is a refined version of the Zonian language, mainly used in the Dominion of Zona.

In total there are nine languages spoken in Sirocco: English, Siroccan, Edallic, German, Spanish, Japanese, French, Afrikaans and Māori. There are, however, only a few Siroccans who can speak a language other than English, including Livia Aïrosser, who is fluent in English, German and Spanish and is able to speak some French.

Sirocco is most well-known for its graphic design (produced by LogoWorks Sirocco) but is also prominent in the field of photography.

Food in Sirocco is predominantly inherited from Britain, but with some American, Australian and Italian influences. Foods commonly eaten in Sirocco include British fare such as fish and chips, "fry-up" (sausages, eggs and chips, commonly eaten for dinner), and meat with three vegetables; American fare such as hamburgers; Italian fares such as spaghetti bolognaise and carbonara and the much-loved chips and gravy of Australian heritage, which is considered Sirocco's national dish. Foods usually assigned to breakfast, lunch and dinner are not necessarily confined to these times in Sirocco - it is not unusual to see people eating bacon and eggs (usually with hash browns) for lunch or even dinner.

Desserts in Sirocco are usually quite sweet, including chocolate self-saucing puddings, pavlovas and apple pies, and are often produced in large quantities to be eaten over several days. While desserts are most often eaten after dinner, an exception to the rule applies on December 26, where the leftovers of the traditional Christmas pavlova are usually eaten for breakfast.

Sirocco, despite being located in New Zealand and South Africa, is not well known for sporting. Sport does have a presence in Sirocco however, with attention being given to cricket and tennis mainly, but also rugby and road cycling. The Olympic Games, Commonwealth Games and Rugby World Cup are all watched with interest when they occur.

Sirocco's main sport is Calvinball, represented by the national team, the Siroccan Vortex, however historically other games, including tapawai, longball, bullrush, soccer, basketball, badminton and ki-o-rahi have also featured to some extent. Sirocco is also notable for "people-watching", the nation's unofficial sport, which involves (as the name suggests) finding a place to stand or sit and watch people go by. Games are usually played during a meal or waiting in a public place, and some games can become quite well-known for the people that are seen. Sometimes confused with stalking, it differs in that the participants do not move from their spot (unless the meal is finished or there is no need to continue waiting) and that no one person is ever singled out for a great period of time.

New Zealand's largest city, Auckland, is located around 270 km south of the Siroccan capital, Alston. Despite the fact that Sirocco is almost entirely located within the Northland region as opposed to the Auckland region, Siroccans generally consider Northland and Auckland to be the same. This is in part due to their proximity as well as their reliance on each other - Northland relies on Auckland for its regional economy, while Auckland relies on Northland for holidays.

Despite the common feeling of antagonism (and sometimes outright hatred) of Aucklanders across most of New Zealand, the assumption that "New Zealand ends at the Harbour Bridge" (when travelling north) and that Aucklanders 'typically believe' "civilisation does not exist south of the Bombay Hills", Aucklanders and Northlanders generally get on well, an outlook shared by many Siroccans.