The Andersonian Civil War was a brief military conflict between the Glorious Dictatorial Republic of Andersonia (GDR) and Anti-Andersonian Alliance (A3) and the Western Evanic Treaty Organisation (WETO). The conflict was the result of insulting remarks towards the GDR and the questioning of its existence and the capability of Glorious Dictator-for-Life Daniel Anderson. The war included switching of allegiances, physical attacks and document theft. Lasting for three weeks between September 3 and September 29, 2010, it ensured the continuation of the GDR state, however the weeks following the end of the war were notable for being inactive as the state itself weakened.

Within just a few weeks of the GDR's foundation on November 4, 2008, the Republic had come under fire for its ideology, name, leader and mere existence. This was to be the thorn in Andersonia's side for most of its life, and tensions were always on the rise and fall during this time.

The weeks leading up to the outbreak of the War were marred by diplomatic breakdowns and increasing friction between the Andersonian-dominated Anmefija Pact and the Central Alliance and their counterparts, the A3 and WETO. By August 10, 2010, diplomatic tensions were becoming so poor between Andersonia and several other nations that the infamous "Andersonia First" plan was enacted. Amongst other things, the plan prescribed the withdrawal of sixteen external alliances, an 80% retention of exports (an increase from the 65% figure set a few months prior), the banning of any international publications and broadcasts over television or radio mediums, the withdrawal of troops from conflict zones across the world, the closing and increasing patrolling of Andersonian borders and emergency (and temporary) surveillance measures. An attack on an Andersonian convoy on August 26 only worsened the situation and pushed Andersonia to the brink of war.

At around 1:30pm NZDT on September 3, news reached Anderson 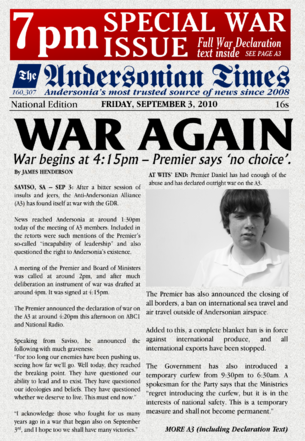 A special 7pm publication of the Andersonian Times reported on the declaration of war on September 3, 2010.

that a meeting of the A3 had been organised to question his capability as Glorious Dictator-for-Life. A meeting of the Board of Ministers was hastily organised at 2pm, and two hours later a declaration of war was drafted. At 4:15pm the declaration was signed and war officially began between Andersonia and members of the A3 and WETO.

— 4:20pm speech given by Daniel Anderson

Andersonia's borders, which had only recently reopened, were once again closed and a blanket ban on international goods was introduced. A temporary curfew of 9:30pm to 6:30am (which was lifted on September 15) was also imposed. The following day, Mendora, Fiori, Ansocia, the Atigib Republic, the Ches Republic, Petralia and Sibirska announced their support of Andersonia. On September 7, nearby Tiania (no relation to Tiana) and Thaurn Coast also voiced their approval of the Andersonian side.

However, at around 10:30am on September 10, documents belonging to Andersonia, including maps, private documents and the notorious Irritation Projekt were stolen by A3 forces and made available among their members first and then made it more widely accessible. It is reported by several sources that they had "never seen [Anderson] so angry before", and forces were mobilised to get the documents back. The operation to return the documents succeeded, however Andersonian prestige had dropped severely after the distribution of the files.

But this proved to be the main climax of the war, and activity soon died off. However, on the night of September 16, news reached Andersonia that Tiana and Thaurn Coast, two nations who had supported Andersonia, had switched their allegiance to the A3 and WETO. Relations were immediately severed and war declared on the two, with brief, sporadic fighting taking place over the next few days.

By late September the war had calmed down and flare-ups were becoming sporadic at most. Negotiations between Andersonia and the A3 organised a ceasefire on September 27, and on September 29 A3-aligned forces formally surrendered.

It is considered that the war was the last great action of the GDR, and soon after the conflict began activity within the state began a terminal decline, not helped in part by the increase in preparations for the foundation of the Federal Commonwealth of Sirocco. The war all but destroyed Andersonian prestige and sunk opinions of the GDR to all-time lows. While Andersonia may have won the war, the following weeks gave the impression of defeat, which may have contributed to the state's inactivity.