The Storm Party of Adammia is a populist, anti-establishment political party in the Empire of Adammia. It was established by Sir Juliano Saunders on 6 October 2018. It is currently part of a cross-party national unity government. Its official president is Lady Anna Worthington, the party's second president, although currently Lord Callum Gurr and Lord Colonel Asher Bond are effectively leading the party in her absence. 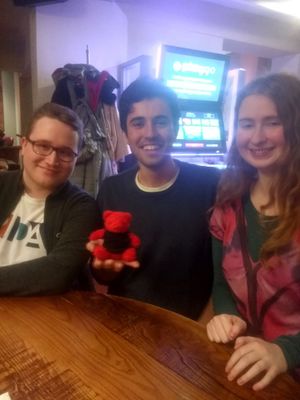 Sir Juliano Saunders founded the party in order to contest the 2018 national election, seeking to capitalise on poor economic news and the controversial merger of the Liberal and Moderate parties. Former ministers Sir Callum Gurr and Colonel Sir Asher Bond defected to the party shortly after its founding. The party was soon noted for its heavy use of slogans and social media campaigning; it also became the first ever Adammic party to design its own logo. In its first manifesto, published 8 October 2018, it pledged to increase funding for the military and place limits on the power of the monarch.

The party gained its first Ruling Council seat in the 2018 local elections when Saunders was elected as Delegate of Abroad Citizens, defeating Madam Sophie Thornton of the Liberal-Moderate Party. With the appointment of Lady Worthington as Duchess of Dank-upon-Bourn shortly afterwards, the party went into the next term with two out of ten Ruling Council seats, establishing the party as a major power after just a few weeks. Later, in spite of several controversies such as a refusal to take part in the Adammic Express pre-election interviews, Saunders won an unexpected landslide victory in the national election, becoming Prime Minister. The Storm Party subsequently formed a coalition government with the Labour Party and the Dank Party.

The establishment of Corellia in January 2019 took the party to three out of 12 Council seats, with Alexandre Schweig-Peters winning the ensuing by-election.

The Storm Party held an internal leadership election in July 2019. Saunders did not stand, in doing so effectively resigning as leader of the party and as Prime Minister. The contest was won by Lady Anna Worthington, who defeated Lord Gurr in the final round of voting. In September 2019, former Liberal-Moderate leader Lord Alex Helliker crossed the floor and joined the Storm Party during the data privacy scandal, bringing the party level with the Liberal-Moderates on the Ruling Council. However, the party performed worse than expected in the first general election to the House of Citizens several days later, winning 3 out of 13 seats. Lady Worthington subsequently became Leader of the Opposition.

The party declined substantially over the following year, with former leader Lord Saunders, along with Lord Helliker and other party members, splitting away to form the Independent Party in September. It was widely speculated that Saunders felt that Worthington had moved the party to an extreme, unelectable position. Lord Gurr remained affiliated with the party, but announced his retirement from Adammic politics around the same time, after his bill calling for a referendum on the status of the Emperor was rejected by Parliament. The Storm Party candidate list for the House of Citizens subsequently collapsed from nine candidates to just two, whilst Worthington became increasingly inactive, forcing Lord Colonel Bond to effectively manage the party's 2020 campaign. Worthington and Bond became the party's only MPs, and in the popular vote Storm finished in last place, behind the novelty Dank Party. Despite this, the party agreed to form a coalition with the Independent Party and the Red Green Alliance, with Worthington and Bond both taking up Cabinet positions.

By 2021, Lady Worthington had become almost completely inactive. In October 2021, Lord Gurr announced his return to Adammic politics, and he and Lord Colonel Bond became the effective acting leaders of the Storm Party, although they insisted that Worthington remained in place as the official party president. The Office of State accepted submissions from them as though they were acting in Worthington's name. The uncontested 2021 general election resulted in Storm retaining two MPs. Gurr and Bond subsequently joined the cross-party national unity government of Lib-Mod leader Lord James Green, with the two serving as joint Deputy Prime Ministers.