Coat of arms of Adammia

The Coat of Arms of the Empire of Adammia is the official national coat of arms of Adammia and of the Adammic Monarchy. It is used by the Office of the Emperor, the Ruling Council and the Office of State. The shield is divided into two halves, the left side depicting two crossed swords on a green background, and the right side depicting a leaf on a blue background. In the greater arms, the shield is supported by two meerkats - the national animal of Adammia - and is crested by a variant of the Holy Roman Imperial Crown, representing the Adammic monarch. The greater arms also feature Adammia's official national motto, Quaerentibus sapientiam et honorem (seek wisdom and honour).

The full blazon of the coat of arms is: Party per pale Vert two swords palewise crossed Argent with hilts Gules, and Azure the side sinister of a nine leafed twig Vert; for a Crest, the Holy Roman Imperial Crown modified with sides Or; for Supporters, two meerkats rampant; Motto "IMPERIVM ADAMMIAE" below the shield and motto "Quaerentibus sapientiam et honorem" below the first motto. 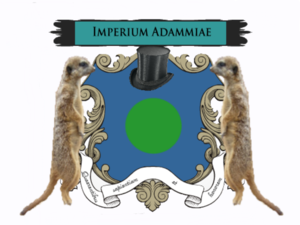 The first version of the Adammic coat of arms was designed by Adam I, Emperor of Adammia early in the Empire's life, being adopted by Imperial Decree III on 4 May 2013. It consisted of a simple Adammic flag on the shield along with a top hat, which was (and still is) a symbol of the Monarchy. The coat of arms often faced ridicule from the micronational community, mainly due to its use of photographic meerkat supporters and top hat, rather than stylised versions.

In February 2014, Brooklyn Hewitt, at the time the Foreign Minister of the Ashukov Federation (one of the few nations with which Adammia had formal bilateral ties at the time), offered to have Ashukov graphic designer Emmanouil Tsompanoglou design a new coat of arms for Adammia. Tsompanoglou's design was officially adopted by Imperial Decree XXII on 3 March 2014. Tsompanoglou was rewarded with Adammic honourary citizenship; Hewitt, for his part in brokering the deal, was made a Knight of the Order of Adammia. The deal was considered to be Adammia's first ever "import" from another micronation. Tsompanoglou would later design the logos of Adammic Online Broadcasting, the Adammic Imperial Space Agency and the Adammic Police Force.

There is no particular symbolism behind the crossed swords and the leaf featured in Tsompanoglou's design, though the colours are clearly derived from the Flag of Adammia.

In February 2015, the Imperial Government began using a lesser variant of the coat of arms as the basis of the logos of its ministries.

The Coat of Arms of Adammia is used on all Acts of Council and Imperial Decrees, and on an increasing number of official documents, including election returns and military commissions.