The National Flag of the Empire of Adammia consists of a green circle on a blue background. The flag has been associated with the micronation since the day the Empire was founded, 13 April 2013. Designed by Adammia's first Emperor, Adam I, it was formally adopted when the original Supreme Directive was ratified on 19 April 2013 and has remained unchanged ever since, although it now derives its status from Imperial Decree III after the article referring to it was removed from the original Supreme Directive by its First Amendment. Decree III states that in order to change the national flag, a replacement design would have to win support in a national referendum. 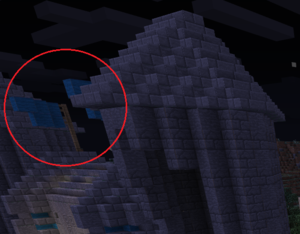 This cropped Minecraft screenshot dated 3 July 2012 is the earliest recorded appearance of the Cyan Flag.

The distinctive shade of blue used in the Adammic flag is based on the Cyan Flag, a design invented by Minecraft player "ThatNoJKid2" and commonly used by both himself and his friend the player "adambelcher" (now known in Adammia as Sir Jon of the South and Emperor Adam I respectively). The Cyan Flag made its first appearance around June 2012 and was a simple solid blue flag built into numerous Minecraft in-game structures by the duo using the "cyan wool" block, hence the name of the flag. Adam I designed the Adammic flag by adding a green circle to the traditional Cyan Flag, the reasoning for the colour green being that it was his "favourite colour". It has been stated since that the circle design was inspired by the flag of the Empire of Japan.

The Cyan Flag design was used by Emperor Adam I in Minecraft for years after Adammia was founded, sometimes interchanged with a crude rendition of the Adammic flag.

The design of the national flag of Adammia was one of the first decisions undertaken in the establishment of Adammia, taking place on Foundation Day itself (13 April 2013) or possibly even the day before that. At this point in Adammia's early history, before the ratification of the first Supreme Directive established the legal continuum, the Empire operated under a makeshift common law system, under which the precedent was set that the raising of the Adammic flag over a territory was the official mark of a territory being claimed. This precedent predates the official foundation of the Empire, as the failure to create an Adammic flag during the invasion of what is now Tytannia Major during the afternoon of 13 April is what caused the invasion to be considered a failure. Adam I produced the first version of the Adammic flag, hand-made on A4 paper using colour pencils, and attached it to the blinds of his bedroom in what is now Primoria at around 8pm GMT that evening, at which point the room was considered Adammic territory and the Empire was considered founded. The digital version of the flag was produced and uploaded to MicroWiki within two hours of this occurring. The original paper flag is now listed by the Imperial Institute of History as a Category A protected historical object, and it is currently part of the Office of the Emperor's private collection of artifacts in the Imperial Archive. It is sometimes taken to White Gold Palace and shown to the public on Foundation Day, and has also been shown to tourists.

When Tytannia was annexed on 21 April 2013, a Tytannia flag was produced which had an Adammic flag in the top-left corner. At this point in time, the Supreme Directive stated that all territories should be marked with an Adammic flag, expanding on the precedent set during the Empire's foundation, However, no flag was displayed in Maternia when it was annexed on 24 April 2013 (and this remains the case to this day), and the precedent was quietly abandoned, with the requirement being removed from the Supreme Directive by its First Amendment on 2 May 2013 (though Imperial Decree III, issued two days later, recommended the practice, whilst acknowledging that it was not compulsory).

The original paper flag in the Emperor's bedroom was retired at some point in 2013 in favour of a colour-printed paper flag, which was displayed on a wall adjacent to the blinds where the original flag was located until 2018, when Emperor Adam I vacated the room in favour of Crown Prince Daniel; that flag is now also part of the Imperial Archive. In August 2013, Emperor Mother Jayne purchased fabric which was used by both herself and Emperor Adam I to sew the first fabric Adammic flag, which was completed in November 2013. This flag is still in use to this day in Imperial City, usually flying over Imperial Square from a window on the upper floor of White Gold Palace when the Emperor is present, and kept in storage when he is not; in this way it acts as a sort of Imperial Standard. In addition to being flown from an upper-floor window, it has on a small number of occasions been suspended from the rafters of the chamber of the Ruling Council, particularly during Foundation Day 2015 and during some Ruling Council meetings. Originally it was intended to fly from the window of the Imperial Household in Adamsville, but this was prohibited by Emperor Father Kevin in January 2014. It can be seen in the background of Emperor Adam I's 2013 Christmas Broadcast.[1]

By 2017, it was generally considered that the first fabric flag was becoming excessively weathered, and the Imperial Government purchased a new flag from Lostislandic firm MicroFlag. This new flag was larger than the first, and of a much higher quality. This flag now regularly flies from the Office of the Emperor in Lagentia, whilst the old fabric flag is kept in Tytannia as a spare.

The design of the flag appeared on the Empire's original coat of arms, used from May 2013 - March 2014. The current coat of arms design uses colours derived from the flag, but does not use the same shapes.

Imperial Decree III states that "the National Flag is a green circle upon a dark cyan background." The original digital version of the flag, which is officially endorsed by the Imperial Government, uses the following colours: