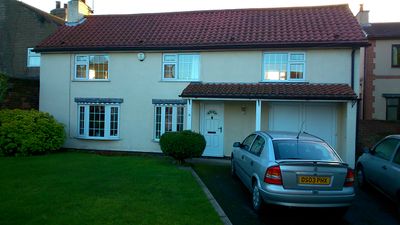 White Gold Palace as seen from the Adammia-UK border.

White Gold Palace is a large house and a major landmark of Imperial City, in the Greater Tytannia province of the Empire of Adammia. It is notable for being home to the official chamber of the Ruling Council and the former headquarters of the Imperial Government and a number of government ministries. It is also the residence of Lord Colonel Sir Reginald Hall, the Archduke of North Adammia.

The Palace was approved as a micronational heritage site by the Grand Unified Micronational Heritage Council on 3 December 2022.

White Gold Palace has existed since at least 1701, when it was part of the Kingdom of England. It was constructed using the same Anston limestone which was used to construct the Palace of Westminster. The building was originally stables and there are some signs of this in the building today - for example, a number of flagstones which once formed the floor of the stables were moved to form what is now Imperial Square, and three of these flagstones have rectangular notches in them where wooden support beams were once inserted to hold up the stable roof.

At some point in the next few decades, the building was owned by a man named William Shooter, as shown by an 18th Century map of the surrounding area which is located in the modern palace's garage. Shooter Falls, a small man-made waterfall near to Imperial Square, is named after him. Around this time, the stables were converted into a set of three small terraced houses. The building became part of the Kingdom of Great Britain and eventually the United Kingdom.

The building's history over the next two centuries is unclear. In the late 20th Century, the three houses were acquired by Alan Smith, who spent several years carrying out extensive renovations on the building. The walls dividing the three houses were knocked down, merging them into one single house. In the 1990s, Smith sold the house to Reginald and Winifred Hall. Reginald focused on improving the gardens, which were in poor condition, cutting down a number of trees soon after buying the property, then having a conservatory (now Governor's Residence) constructed around 2003 and building a fish pond, flowerbeds and a shed over the next few years.

On 21 April 2013, Hall's grandsons Adam I, Emperor of Adammia and Crown Prince Daniel annexed the rear garden and conservatory as part of the Empire of Adammia, forming the Province of Tytannia. A week later, the house and the front garden were also annexed, forming the Province of Sapientia. The two provinces were merged into a larger Tytannia Province in November of that year. The first meeting of the Ruling Council was held in the rear garden in July 2013 and the house soon became the council's de facto meeting place.

On 9 February 2014, the National Government Act 2014 was passed by the council, officially naming the house White Gold Palace and making it the Ruling Council's official meeting place. The headquarters of the National Government (later the Imperial Government) were also set up there, along with the Ministry of Finance, Ministry of Culture and Ministry of the Environment. The Palace, now the centrepiece of the Empire's capital Imperial City, has since hosted Foundation Day celebrations as well as New Year's Eve parties, where the Emperor's Fabulous Quiz first took place in 2015. Madam Winifred Hall died on 11 April 2016, leaving her husband Sir Reginald as the sole permanent resident of White Gold Palace. 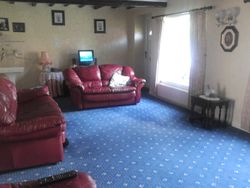 The living room of the palace, used as the chamber of the Ruling Council.

White Gold Palace itself is a two-story building constructed from limestone. Its Adammic address is 1 West Road, Imperial City, Sapientia, Tytannia TY1 001. Its ground floor includes, starting from the north-west corner going anti-clockwise: a garage, utility room, kitchen, dining room and living room. Governor's Residence, the conservatory, is not part of the original palace building but is considered an extension to the complex. The garage and living room both have doors opening onto the intersection of West Road and Bates Street at the edge of Imperial City. The utility room has a door opening onto Imperial Square, which can also be accessed from the dining room via Governor's Residence. The stairs to access the upper floor are located in the dining room. The upper floor consists of a landing, from which three bedrooms and a bathroom can be accessed.

The garage of White Gold Palace has several uses within the context of Adammia. It is used to store training gear for the Adammic Army and the equipment of the Adammic Imperial Space Agency. It is also the main base of operations for Capital Brewery Ltd.

The dining room was the headquarters of the Cabinet Office from 2015 to 2017. The living room, meanwhile, is particularly notable for being the official meeting chamber of the Ruling Council, and was once arguably the political heart of Adammia. Nowadays, the council's unofficial meeting place is in Serkatia.

The upstairs landing is where the Empire's oldest physical fabric flag is usually stored on a table. Its modern replacement is flown from the landing window, which overlooks Imperial Square, Central Park and Tytannia Army Base, much of the time when the Emperor is visiting Tytannia, much akin to a royal standard. The largest bedroom at the western end of the house was the Ministry of Finance from 2014 to 2017, and was used to store the Treasury box.

Legally, the property associated with White Gold Palace includes the entirety of Sapientia and Tytannia Major, taking up the majority of Tytannia except for Tytannia Ulterior, which is owned by Wakefield Metropolitan District Council. As a result, the entirety of Sapientia and Tytannia Major is owned by Sir Reginald Hall and is considered to be the grounds of White Gold Palace. This includes the Lowlands, the rest of Imperial City, Tytannia Army Base, Outwood Orchard and the Highlands. The building and its grounds are maintained by Hall in a personal capacity as opposed to the Adammic bodies which use them (such as the Ministry of Defence as is the case with the army base).