The Adammic Army is the land warfare branch of the Military of the Empire of Adammia. Founded on 21 April 2013, it is the largest branch of the Adammic military, and is one of the oldest institutions in Adammia. Having seen action in the Astley Meadow Insurgency in early 2014, it today serves a primarily ceremonial role.

On 21 April 2013, Decree I (Military) was signed into law by Emperor Adam I. This created the Adammic Army, and appointed him as Commander-in-chief. That day, he managed to secure two recruits for the Army, Prince Jake and Matthew Foster.

The first training session of the army took place in Tytannia on 28 April, when the soldiers attempted to hit the trunk of one of the two trees in the province with a makeshift javelin. They returned on 5 May for more practice, but were interrupted by a young rogue Adammic citizen, who stole one of the fake guns that the Army were using, starting the Skirmish of Tytannia. On 30 May 2013, the first military directive created a basic structure to the Army.

The Army sat inactive for a long time until October 2013 when Emperor Adam (now the Field Marshal of the Army) gained another recruit for the army, a school friend. The new recruit wanted to be a paratrooper, but the logistics for an actual paratrooper unit were too much for the Ministry of Defence to pay for, so the Imperial Airbourne was created, an honourary paratrooper unit which technically served as a standard infantry unit in the army. In December 2013, the Imperial Airbourne became the first unit to adopt a motto: "It could be worse. You could be dead."

9 January 2014 saw the creation of the Special Operations unit, and a restructuring of the main infantry section of the army. The infantry section was restructured again on 25 January. Around this time, the army was involved in the Astley Meadow Insurgency, the flashpoint of which was the Skirmish of Astley Meadow. When Borealia joined the Empire in July 2014, a further 3 soldiers joined, at which point the Army peaked at 15 members. With the armed forces largely inactive in the second half of 2014, the Ministry of Defence disbanded most of its old units.

From 2015 onwards, the Army experienced a drift from cohesive groups to disparate units spread across the United Kingdom, often consisting of one or two soldiers. The reputable 2nd Infantry Division disbanded in August 2016 after Borealia became independent from the Adammia, but it was re-formed in 2017 as a collective of the Army's forces in the West Midlands, surrounding South Adammia. Old units which had been inactive since 2014, such as the elite Special Operations, were re-activated under new leadership, and the size of the Army reached new heights. The 3rd Infantry Division was established in 2018 as the Army's "expeditionary" division, including units which were not stationed in either Yorkshire or the West Midlands. 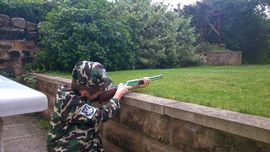 A soldier of the Western Regiment in Tytannia Army Base.

Usually, the Adammic Army fights unarmed. The Western Regiment has access to some mock weaponry such as toy plastic swords and Nerf guns. The 3rd Infantry Regiment creates its own makeshift weapons, such as spears, and has also been known to use air rifles. It is unknown what equipment the other units use, if any.