The Adammic Air Force is a branch of the Military of the Empire of Adammia. 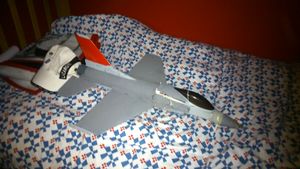 A RC plane used by the 1st Imperial Air Group

The Adammic Air Force was created by Decree XI on 6 August 2013. Shortly afterwards, Emperor Adam I appointed himself (as Supreme Commander of the Military) the Air Chief Marshal of the Air Force. For almost two months, the Air Force was an empty ceremonial unit, until on 4 October 2013 when Tom Bennett (a school friend of the Emperor) signed up for the Air Force, becoming the first Commodore.

On 9 January 2014, the Air Force constructed two paper aircraft, one of which crashed and the other survived to become the first vehicle of the air force. On that day, a military directive by Grand Marshal Emperor Adam I created a joint army-air force base at a school near Primoria province in the UK, known as Maths Stairs Airbase, which was the headquarters of the Air Force until it was decommissioned in May 2014.

The Air Force was briefly involved in the Astley Meadow Insurgency in March 2014 when it launched a "drone strike" (a paper projectile) at Luke, the insurgent. The projectile missed its target.

Along with much of military, the Air Force became inactive after May 2014, though its sole unit was one of the few to escape the cuts of November 2014. By the time of these cuts, the Ministry of Defence had changed its focus for the air force, investing in a remote-controlled quadcopter. The inactive paper aircraft unit was replaced entirely with the modern 1st Imperial Air Group on 21 January 2015 with a new Commodore, Daniel Pettinger. This was followed by the creation of a new headquarters for the Air Force, AAF Dearneland, on 14 February 2015.